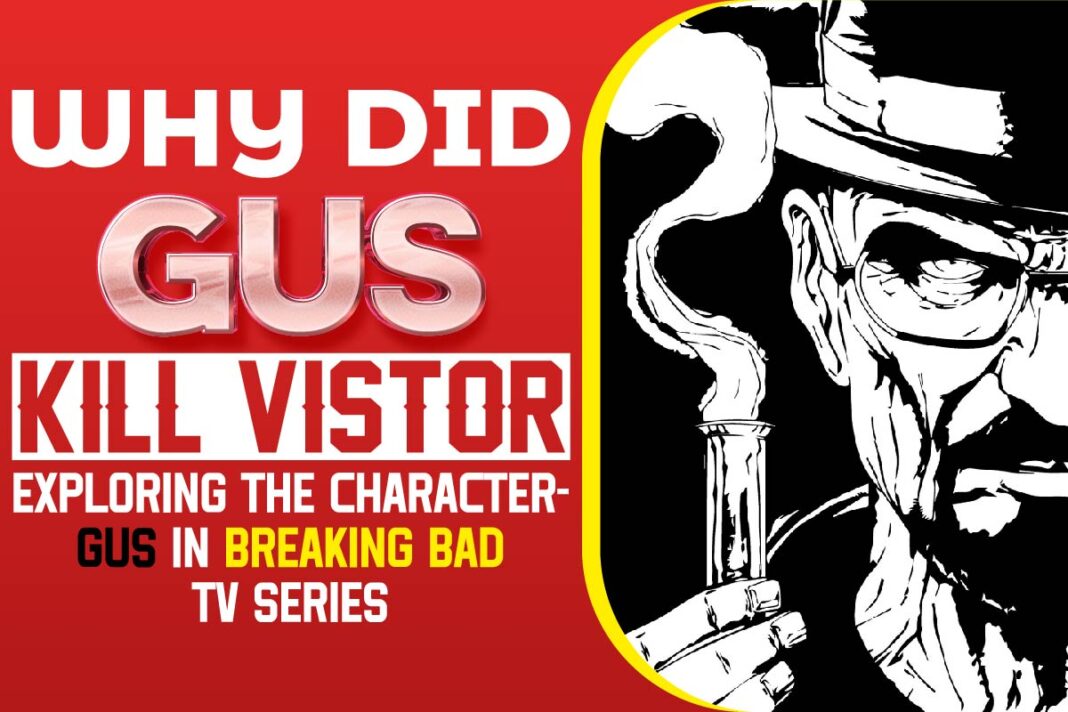 Gus was a known character in Breaking Bad, and it was portrayed by Giancarlo Esposito, a Chilean-born actor, and writer. He was named Gustavo Fring and was last seen in the 2011 series of Breaking Bad titled “Face Off.” He was a drug lord in Breaking bad and was known for being a Philanthropist, business magnate, and well-respected man. Just like other drug dealers like Walter and Mike, he was involved in several shady dealings that led to the death of many of his associates and enemies.

So Why Did Gus Kill Victor?

Gus killed Victor because Victor eventually came out as an untrustworthy and irresponsible person. His actions might have also contributed to the killing of Gale. Some neighbors spotted Victor at the murder scene of Gale, and this could be the reason Gus was annoyed at him.

Why Did Gus Killed Vector Instead Of Jesse?

Many followers of Breaking Bad had expected Gus to kill Jesse- Walter’s business partner, instead of his partner- Victor. The reason for this action is explained below;

Gus’ decision to murder Victor instead of Jesse at the beginning of season four was quite significant. Victor made his debut at the beginning of season 2 and had remained Gus’ henchman since. Victor tended to be a violent action man for Gus’ drug business and ensured that everything runs smoothly. Coincidentally, the man he had served for years ended up slitting his throat in one of the most brutal scenes of Breaking Bad season four.

There was a prediction about Victor’s murder in the prequel series: Better call Saul. In this prequel, Victor had worked for Gus long before the Breaking Bad series. In season 3, Victor had watched closely over Gus’ meth lab, where Walter and Jesse also worked. Walter had worried much when Gale was introduced into the business, and he felt he would be replaced by the newcomer someday.

Walt eventually forces Jesse to do the dirty work of killing Gale, making him the sole cook in the meth lab. Also, in Breaking Bad season four, titled; Box Cutter, Gus held Walter and Jesse hostage so they could be punished for their actions, especially for the killing of Gale, after he became aware of what went down.

Victor had cooked his quantity of meth to prove to Gus that he had studied Walter’s methods. Viewers were surprised that Gus decided to walk in and slit open Victor’s throat rather than targeting Jesse and Walter. Gus used a box-cutter to kill Victor and then told other workers to get back to work.

Gus was unhappy that Victor was earlier spotted at the scene of Gale’s murder by some unsuspecting neighbors, thus putting the whole operation at risk. There might be some deeper meaning to the decision of Gus to kill Victor.

He Killed Victor to Send a Message to Jesse and Walt

Follow Victor’s murder, Gus didn’t threaten Jesse or Walt; hence the killing of Victor might have been an intimidation strategy by the drug lord.

By killing Victor, Gus sent a clear message to Jesse and Walter, which meant if they put their drug operation at risk again, he wouldn’t hesitate to murder them.

Though Jesse was the one expected to pull the trigger, Victor seemed to have put himself in a suspecting position on the murder of Victor. Later that season, Gus saw a composite sketch of Victor inside a police station, and the killing of his longtime accomplice was justified in his mind.

Jesse and Walt Were Critical Assets

Despite many other people knowing how to cook meth properly, Gus had selected Jesse and Walt because of their high knowledge of the substance and the trade. This means that Jesse and Walt were critical assets in Gus’ eyes and could be why he didn’t want to kill any of them.

With Gus considering killing Walter and Jesse to have a massive potential of causing more harm to his business, the supposed victim became emboldened and got more time to eliminate Gus.

In Breaking Bad Season 5, Walter had mentions Victor’s death while having a conversation with Jesse. He had told Jesse that Gus killed Victor because Victor was being engulfed in greed. In the end, followers believed that Gus should have thought more about eliminating Jesse and Walt from the equation instead of Victor.

Breaking Bad: Face-Off- What You Should Know About The Thirteenth Episode Of Season Four

Face Off is the thirteenth episode of the Fourth season of Breaking Bad and the 46th overall episode of all the seasons.

The show aired on AMC in 2011, and it was written and directed by Vince Gilligan, the executive producer of the show. This episode marked the climax of the conflict between Walter and Gus, who happened to be the two most prominent characters of the series. This episode also was witnessed the final appearances of notable characters like Fring, Mark Margolis, and Ray Campbell.

This episode received some critical acclaim upon its airing and was considered one of the best episodes of the 2011 season.

A Brief on the Plot

Walter failed to kill Gus via a car bomb detonation, and after removing the remnants of the bomb, he asked Jesse where Gus frequented that had no security cameras.

Before Jesse could think of where Gus frequented, he was approached by some detectives and whisked to the police station, where he was questioned about Brock’s poisoning.

Walter narrowly escaped an assassination attempt on his life; he also learned that Gus and Hector were longtime enemies. Walter approached Hector and tried to convince him to kill Gus, but Hector came to the DEA. Someone spotted Hector at the DEA office and called Gus, who thought Hector had become an informant and tried to kill him.

The police released Jesse after Brock’s diagnosis showed that he wasn’t connected to his poisoning. Unfortunately for Jesse, Gus’ thugs were waiting for him, and he got kidnapped and then brought to the laboratory to prepare the next batch of meth.

Gus eventually met Hector in his apartment and scolded him for being a coward, and as Gus was about to inject Hector with poison, Hector decided to look at him once in several years. Unknown to Hector and an accomplice named Tyrus, Gus had installed a bomb attached to a bell under Hector’s wheelchair. The bell was rung, and it killed both Tyrus and Hector instantly.

Gus initially didn’t know how severe the blast was until he collapsed and dies from injuries sustained on his face a moment after stepping out of the room.

Upon hearing the news of the explosion on the radio, Walter felt his plans had worked, and he ran to the lab where he killed two of Gus’ henchmen and frees Jesse, who was kidnapped then. Walt and Jesse eventually burnt the lab before any of Gus’ men could arrive.

Jesse eventually told Walt that Brock would live and was poisoned by the Lily of the Valley Berries. Walter called his wife Skyler and informed her of the explosion and even said he had won. A shot at Walter’s backyard ended the episode.

The Production of the Episode

The entire production crew was unsure of whether the series will be renewed or not, hence the final appearances of many actors.

It took months to prepare the massive facial wound on Gus Frings, and the production team had to work with the special effect team from the producers of “The Walking Dead,” which also aired on AMC. The elaborate makeup plus computer-generated images were also involved in several scenes including the partial burning of Gus’ face.

The main song that played throughout the episode was “Black” by Danger Mouse and Luppi featuring Norah Jones. Other songs played in the episode were; Goodbye by Apparat, and Freestyle by Taalbi Brothers.

The Reception and Awards

Breaking Bad; Face-Off was critically acclaimed from a number of movie critics. The IGN for instance awarded the episode a massive 9.5 rating out of maximum 10. Hitfix also described the episode as “Fantastic” from the beginning to the end.

TV Fanatic awarded the episode 4.8 out of a maximum 5, while the AV club awarded it an “A”. Time Magazine described the season finale as “Stunning”. The Hollywood reporter described the episode as “Self-correcting” and so many things were done right.

Many famous individuals believed that the episode gave the viewers an action-packed and very satisfying episode in a near-perfect dramatic finishing.

This episode was believed to have contributed to the numerous awards won by the TV series. These awards include; 7 Primetime Emmy Awards, ACE Eddie Award, and Golden Reel Awards, just to name a few. The individual actors , directors, and producers also went on to win individual awards.

The Best Brain Games to Keep Your Mind Active