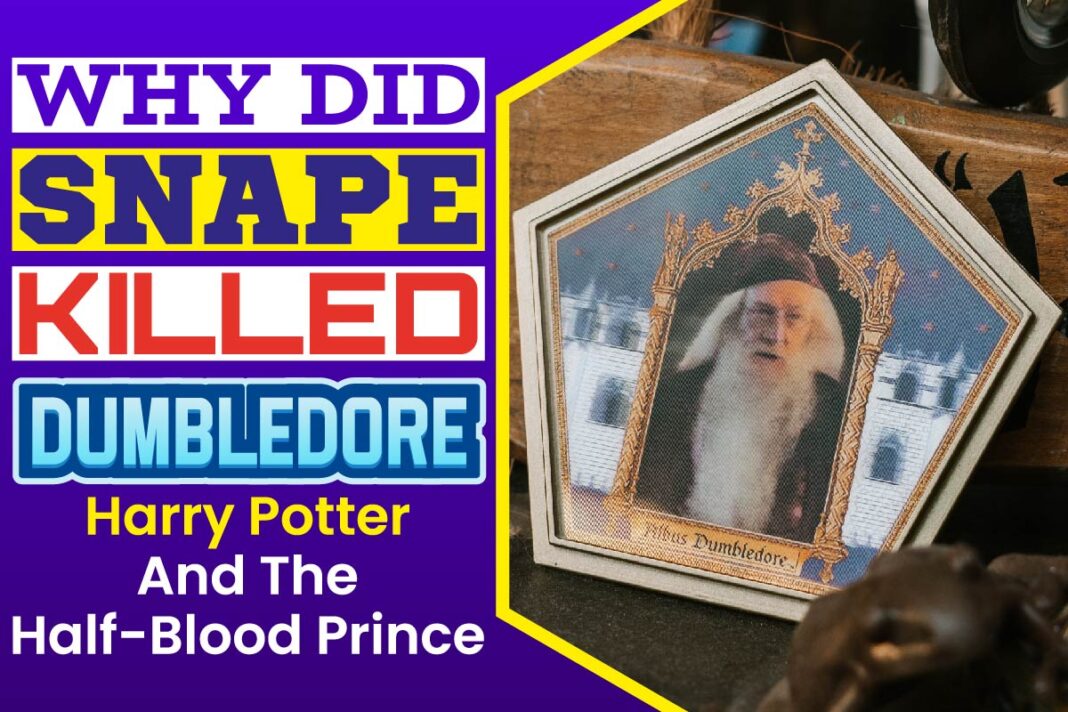 The 2009 Harry Potter and the Half-blood Prince was one of the Harry Potter movie series seasons. Warner Bros distributed the fantasy film directed by David Yates. The movie was released on July the 7th, 2009, in London and grossed over $900 million at the box office in the first year of release. Like other movies in the Harry Potter series, the Half-blood prince was quite intriguing, generating many positive reviews even from movie critics.

So Why Did Snape Killed Dumbledore

Snape killed Dumbledore because he asked him to do so. Dumbledore had a feeling that Voldemort had instructed Malfoy to kill him but wanted to die his way.

The Killing Of Dumbledore By Snape

There were several speculations on the rationale behind the killing of Dumbledore by Snape. Experts eventually believed that Dumbledore wanted to preserve Malfoy’s soul and want Voldemort to trust Snape fully; hence he asked Snape to go ahead with the killing.

Aside from killing Dumbledore, viewers believed that Snape must have been terrified by his past. That was why he approached Dumbledore when he admitted his atrocities and pleaded with him to preserve the Potters’ lives. In return for this gesture, Snape decided to pledge allegiance to Dumbledore alongside the Phoenix’s order, which made him a double agent.

Being a powerful wizard, Snape used his power of Occlumency to hide his true identity and betrayal from Voldemort. He was, though, more loyal to the good side, his forage into the dark side put him in serious trouble against Voldemort on several occasions.

He was pretty sarcastic, but within were deep emotions and anguish. He was a professor at the Hogwarts School of Witchcraft and Wizardry. He was rather hostile to Harry because Harry resembled his father- James Potter very much, and James bullied Snape a lot while they were school students.

Though he started being feared and hated by many, but eventually developed into an enigmatic character, Snape eventually died in the hands of Voldemort, a Lord, and in the seventh edition of the series.

Snape had much love for Harry’s mother at different times in the series, and she compelled Snape to defect from the “Death Eaters.” With this, Snape became a double agent for the good side of Dumbledore and the Order of the Phoenix, which happened to be the dark side.

Many people described Snape’s character as a “rare gift” a notable personality from Washington Post also described his character as “The most heartbreaking and surprising of His achievements.”

Severus Snape evolved all through the Harry Potter series, and here is a summary of his activities in each episode;

Harry Potter and the Philosopher’s Stone

This is the first time Snape appeared in the Harry Potter series. He appeared shortly after Harry arrived at the school. As the school’s Portion’s master, Snape became a sinister teacher who made lots of disparaging remarks about Harry. Harry had suspected Snape wanted to steal the philosopher’s stone and attempted to kill him.

In the book’s final chapter, Dumbledore had suggested to Snape that he should be friendlier to Harry since his father had saved Snape’s life long ago. Though Snape accepted Dumbledore’s suggestion, Harry had retained his feelings of resentment and suspicion towards him. The relationship between Snape and Harry remained tensed, so was Snape’s attitude towards him.

Harry Potter and the Chamber of Secrets

Snape was given a minor role in the Harry Potter and Chamber of Secrets. His primary activity was to help Gilderoy Lockhart to oversee the Hogwarts school’s dueling club.

Harry Potter and the Prisoner of Azkaban

This is one of the episodes where Snape demonstrated his expertise in making portions by brewing the famous Wolfsbane potion. This Portion was brewed in defense against Remus Lupin- the professor of Dark arts.

Throughout this episode, Snape suspected that Professor Lupin had helped Sirius Black- Harry’s godfather enter the Hogwarts castle. Sirus had been convicted wrongly at that time of killing Peter Pettigrew and some bystanders. All these suspicions Snape had for Lupin were based on his friendship with Harry’s father and Sirius.

Snape tried to apprehend Sirius towards the end of the movie by making the students and teachers think Lupin was a Werewolf, which made Lupin resign his position in the school.

This episode also revealed the connection between Snape and James- Harry Potter’s father.

Harry Potter and the Goblet of Fire

Snape’s role in this episode was not different from the previous three episodes. His attitude towards Harry changed when the latter entered the Triwizard tour because he wasn’t expecting Harry to be joined.

Harry accidentally fell into Dumbledore’s Pensieve, where he discovered some secrets about the Death Eaters and some of the previous trials of the members.

Igor had named Snape a Death Eater, but Dumbledore defended Snape, claiming that even though Snape was indeed a Death Eater, he changed sides before Voldemort’s downfall.

Just before the end of this episode, Dumbledore tried to convince people about Voldemort’s return.

Snape In The Last Four Episodes Of Harry Potter Series

Snape was more daring in the last four episodes of the Harry Potter series than the first four.

Harry Potter and the Order of Phoenix

Snape returned with a more prominent role in the fifth episode of Harry Potter. Voldemort had returned to a mortal body, and Snape had continued working as a double agent for Voldemort.

Snape and Sirius had several altercations in this series, and he even taunts Sirius about his inability to have a role in the order’s mission because of his fugitive status. Harry felt Sirius took many risks because of Snape’s taunts.

Sirius later died in this series, and Harry held Snape partly for it.

In the second chapter of the book, The Half-blood Prince, Bellatrix and Narcissa had visited Snape about a difficult task given to Narcissa’s son. Narcissa had made swore to protect Draco, his son and help him complete the difficult task.

At the beginning of the term’s feast at Hogwarts, Dumbledore made an announcement that Snape becoming the new defense against the Dark Arts professor. This means Snape had to stop preparing portions but Harry met some people and decided to enroll in a class where preparing portions were taught.

Harry later had a fight with Draco and cast a prince’s spell that was marked for enemies on Draco. The Devastating wound from the spell on Draco’s chest and face forced Snape to rush to the scene and cure Draco. Voldemort assassinated Dumbledor by the end of this episode.

Harry Potter and the Deathly Hallows

In the seventh edition of Harry Potter, Voldemort and other death eaters have become more powerful in the world of the wizards and Snape had become the headmaster of Hogwarts. Death eaters; Alecto and Amycus had become staffs.

This episode tends to focus more on Harry Potter and his friends outside of the school. The was an attempt to steal the sword of Godric Gryffindor, but Harry and his friend discovered the plot and reported to Snape, who sent the sword to Gringotts Wizard Bank for safe-keeping.

Just before the end of the school year, professors Flitwick, Sprout and Mc Gonagall forced Snape to leave Hogwarts School of Witches and Wizards. Voldemort later summoned Snape thinking that killing Snape will make him the master of the wand. Voldemort successfully killed Snape by having his death snake bite him in the neck.

A lot of revelations came to the fore, especially the one that Voldemort tried to kill Harry and friends and Dumbledore had tried to use a gaunt ring cursed by Voldemort.

Snape’s memories eventually helped Harry obtained the necessary information that would help him defeat Voldemort. Harry also got to know the Snape had wanted to retire from his position before his death.

Chumlee Net Worth, Divorce and More