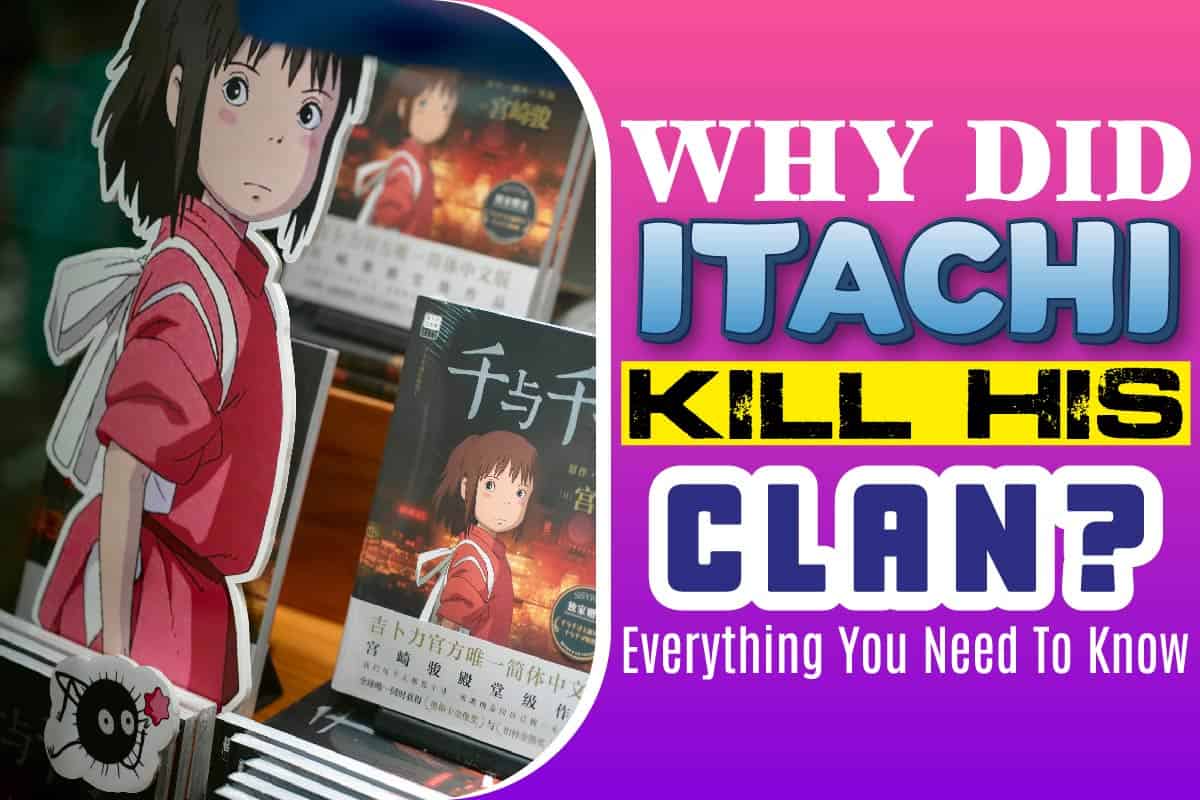 Itachi Uchiha, who is the older brother of Sasuke Uchiha, is hated by millions of Naruto fans worldwide for his role in the murder of his clan.

You cannot discuss the Naruto anime series without mentioning Itachi. He is seen as one of the top characters in the show. At some point in part one, Itachi kills the entire Uchiha clan except Sasuke, his brother.

This made Sasuke hate Itachi as he looked for ways to kill him for what he did, even though he once looked up to him as an older brother.

The show’s producers successfully portrayed Itachi as a monster who murdered the entire Uchiha clan in cold blood.

Although the Uchiha clan is one of the toughest in Konohagakure, their sad demise established Itachi As A Character Everybody Loved To Hate In Naruto.

Why Did Itachi Kill His Clan?

The short and direct answer is that Itachi killed his clan because he wanted to protect his homeland. However, it’s much more complex than just protecting one’s homeland.

Itachi, a powerful and prominent son of a noble and valued clan, commits an atrocity that kicks off a chain of events featuring Sasuke.

To fully answer what everyone is asking, we need to know why Itachi did what he did.

Itachi Murdered His Clan To Stop A Coup

The Uchiha clan and their rivals, the Senju clan, were among the families that founded Konohagakure. They built the world’s first shinobi village during the non-operational era in the Naruto world.

Meanwhile, other fiefdoms and clans followed their footsteps to pull the world from the warring states’ battle era to the era of the global superpowers that were in existence at the beginning of Naruto.

Even though both rival clans set aside their rivalry to end the war and discover Konoha, they didn’t entirely forget their rivalry.

Resentment and rage began to build up as the Uchiha clan were constantly being neglected whenever it was time to choose the members of the governing council that will rule the village.

On the other hand, the Senju clan members had always held the power of office from the village’s early days, while their other clansmen and allies were given appointment positions in the governing council.

The Senju clan and other villagers became suspicious of the Uchiha clan after they refused to help fight the great beast that attacked the village.

After the episode with the beast, the Uchiha clan was ignored completely in the village’s affairs. They were no longer part of Konoha politics and were limited to their corner of the village.

This made the elders in the Uchina clan to become furious with what was going on.

To make matters worse, Faguku Uchiha, the clan leader, decided to take matters into his hands by planning a coup against the village’s government.

When word of the coup got to the ears of the village elders, they met with the Uchiha’s strongest clan member (Itachi) and proposed a painful task to him.

Itachi was asked to wipe out his clan for the betterment of Konoha, or else he will die with them.

Itachi Tries To Protect His Brother

Itachi agreed to carry out the murdering task with a guarantee that his brother (Sasuke) will be spared.

Danzo Shimura, one of the elders of Konohagakure, was aware of the love and bond that exist between Itachi and Sasuke, and he exploited it.

Danzo told Itachi that they would let Sasuke be as long as Itachi carries out the attack, kills his people, and takes the fall.

Itachi agreed to do as he was told, not knowing that his actions will push Sasuke towards vengeance, which later led to the death of Itachi.

As a village shinobi, Itachi took the oath of allegiance, and his allegiance was to Konoha and not to his clan or family, which was why he made the killings.

Also, the elders of Konoha told Itachi that another war might break out if the Uchiha clan were allowed to carry out their devilish coup, which may lead to the loss of lives.

In his bid to avoid the loss of lives from the proposed coup, Itachi murdered his clan in cold blood.

After Itachi’s murderous rampage, his reputation as a traitor and murderer allowed him to access a terrorist group known as Akatsuki.

While Itachi was a member of Akatsuki, he served Konoha as a double agent, feeding them information about the terrorist group plans until Sasuke killed him.

Why Did Itachi Kill His Parents?

Itachi sent his parents to the afterlife himself. Despite his betrayal, they never hated him. On the contrary, they made him understand how proud they were of him and asked that he took care of Sasuke.

With pain in his heart, Itachi knew that Sasuke was the only person that could punish him for his deeds.

He pushed Sasuke toward the path of vengeance by making himself the enemy and allowing Sasuke to know that he was responsible for their parent’s death.

Furthermore, he employed Tsukuyomi to torture Sasuke with visions of their parent’s death.

Itachi and Sasuke’s parents were like any other parent; they cherished their children’s lives more than theirs. They knew that Itachi had decided to slaughter the Uchiha clan to prevent the proposed coup.

They understood where he was coming from as a Shinobi and didn’t want to fight their son to the death, which was why they sacrificed themselves.

Before his death, Fugaku Uchiha told Itachi that they might not share the same views, but he was proud of him. Also, he asked him to take care of his brother.

To make the killing process easy for Itachi, Fugaku told Itachi that he was a great man and that their pain and anguish will be quick.

One other reason that stopped Itachi’s parents from fighting back was some old Japanese custom and the fact that there was no clan to return to because everyone else was dead.

Before Itachi came for his parents, he killed every member of his clan, excluding Sasuke.

For Fagaku, he already suspected that the entire Uchiha clan was either killed or imprisoned and that the Leaf village has abandoned their plan and their clan was doomed.

Fagaku felt bad and knew there was no point being Uchiha’s commander when Itachi was no longer by his side, and the clan members were all dead. As the clan leader, he takes great responsibility for his clan’s demise.

There is an ancient tradition in Japan that encourages a disgraced leader to commit suicide to ask for forgiveness for letting the people down.

As Itachi Killed his parents, he spared them the humiliation of dying a dishonorable death, which was why his parents were not worried about his actions.

Did Itachi Regret Killing His Clan?

Even though his actions led to the death of many, Itachi never regretted what he did. However, he felt some form of remorse, knowing that Shisui would never forgive him for what he did.

However, whenever he remembers what his father always said about not allowing others to dictate how one should live their life, he continued on his path with no regrets.

Itachi regretted that he never confided in Sasuke about his plans, which made Sasuke see him as his number one enemy.

Another reason why Itachi never regretted his actions was because he had it on good authority that the Uchihas were planning to disrupt the peace in the Hidden Leaf community, and he swore an oath to fight against enemies of Konoha.

In discharging his duties as a Shinobi, Itachi always wanted peace to reign between the Uchihas and the village.

Later, he understood that the Uchihas and Danzo had a cat and rat relationship, and he ended up killing his clan for Danzo so that peace will reign.

Many people see Itachi as someone who always wants people to benefit from whatever they do. He always used non-violent methods to persuade people to change their stance.

Itachi always put the Leaf village first before anyone, and he never had second thoughts of his actions, as long as they are for the good of the community.

The Uchiha clan disliked Itachi because he believed in one Konoha, despite his clan being shoved aside in the decision-making process.

He put Konoha ahead of his clan, which made many people lose their respect for him.

With everything going on, the Uchiha clan decided to invade Konoha and take control of the government, but Itachi stood in their way and stopped it.

Itachi believed he had no choice but to protect Konoha from the impending coup and to neutralize his clansmen from their invasion of Konoha.

He was a Shinobi that swore an oath to protect Konoha, and I hope you now understand why he had to kill his clan.

Does Lockdown Browser Record You? You Need To Read This Now

Why Did Kakashi Kill Rin? Here’s All You Need To Know