How Does Nardwuar Know About Other People 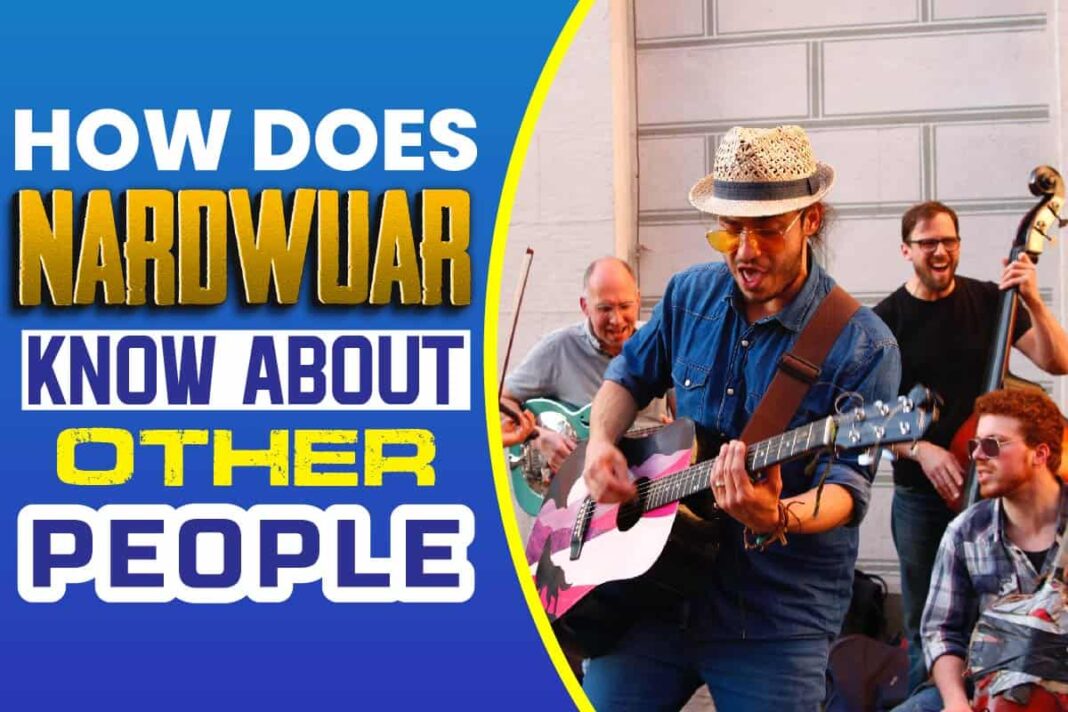 Have you seen anyone pull off crowd surfing at a Ted talk? Let’s rephrase the question; can you imagine anyone pulling off unplanned crowd surf at a Ted talk? Well, Nardwuar, the human serviette, did it. It was unbelievable and completely endearing at the same time!

Unbelievable and endearing are Adjectives that describe Nardwuar. You watch him in his famous interviews and what comes to your mind is “unbelievable” then almost immediately an “I like this man” follows. At least, this is true for most people.

His interviews are usually iconic. His range is a wonder. Nardwuar has interviewed several celebrities, from musicians to actors to politicians. And almost every time, people wonder how he knows what he knows.

So, let’s find the answer to the question below.

How Does Nardwuar Know?

Deep research! As simple as it sounds, that is what Nardwuar attributed his in-depth knowledge of his interviewees too.

He says nervousness and having no idea what to ask or say pushes him to carry out in-depth research. According to Nardwuar, there is a lot you would find if you take out time to look for it.

Also, in trying to make an interview fun, he sometimes comes up with random stuff he thinks would get the interviewee to talk or participate more. It works for him in many ways. Because it might be something the interviewee has done, participated or is interested in or not.

Nardwuar the serviette is an interesting character. The brilliance with which he carries out his interviews is unrivaled.

This post contains more information on his life and his world-class interviews:

The eccentric 53-year-old Nardwuar was born in Vancouver. He is an interviewer and a musician. Nardwuar, named John Ruskin, has been hosting a radio show on CITR 101.9 FM since 1987. He is the lead singer and the keyboardist for the evaporators.

Anybody who knows and listens to Nardwuar knows that he is Canadian because he wears his Vancouver roots like a badge of honor.

The media personality with the quirky personality has been in the interviewing game for many years, but his popularity got more deserved attention with the rise of social media usage.

Nardwuar likes to start his interviews by asking the interviewees who they are. He follows the “who are you?” with a “from?” if the interviewee doesn’t talk about where they are from when answering the first question.

Every Nardwuar interview ends with him saying, “keep on rocking with the free world” and doot doola doot doo… The interviewee responds with doot doo. After which, Nardwuar does his signature closing pose. The pose is him freezing in front of the camera till the video cuts.

Now, how did he choose “Nardwuar the human serviette” as his brand name? Well, he says it is “a stupid and dumb name like Sinbad or sting.” The serviette came from the fact that there are no serviettes in the United States but napkins.

The human comes from the song “human fly.” So, the name Nardwuar the human serviette, was born from a combination of something stupid, a human, and the lack of something every other country had.

The creation of the name “Nardwuar the serviette” shows how he works. He has given interviews a different look. Let’s face it; his interview style is unmatched.

Like Snoop Dogg puts it, while talking about why people love his interviews with Nardwuar, “Our interviews are rather different!” Most guys who interview me don’t have as much personality as you.

You are courageous and have a lot of personality. So, it brings the best out of me and you at the same time.” No one could have described Nardwuar’s interviews and obvious talent in a better way.

Nardwuar has consistently gotten different interviewees shocked to their bones because of something he mentioned from their past.

He got Pharrell Williams to say, “this is one of the most impressive interviews I have experienced in my life” after he pulled out Pharrell’s first recorded track. Pharrell also told him that his research skills were second to none.

Drake couldn’t hold back his words of praise for Nardwuar’s skills. He also said, “This is the best interview I have done in my entire life.”

Because of his eccentricity and creativity, you would think that the ratio of love to hate would be so high. Anyway, there is no scale to measure what he gets more, love or hate. But he gets picked on several times. He also receives so much hate.

It will also interest you to know that not all of Nardwuar’s interviews end with glowing comments.

There are interviews where the guests don’t find his approach funny or clever. Some people have found it disrespectful and dumb.

But then, calling Nardwuar’s work dumb most likely comes from a place of denial or hurt because you don’t need to be a fan of his work to see how brilliant the man and his work are.

He has gone through a series of bullying. He has gotten threatened, attacked, physically and verbally, because of some of his interviews. Some celebrities like Sabastine Bach, Dave Rowntree, the quiet riot band (they chased Nardwuar alongside his crew on the street.) are culprits.

Some Of Nardwuar’s Most Famous Interviews

If you haven’t watched a Nardwuar’s interview or if this is your first introduction to him, then I suggest you watch this interview.

The interview fully captures Nardwuar’s goal, including what he wants to achieve with his interviews: a deep dive into the artist’s life, especially their past and a souvenir that pushes them to talk about parts of their journey. Parts they wouldn’t ordinarily talk about.

The moment where Nardwuar pulls out a vinyl of “The music of the Cosmos” is a must-watch. This act made Pharrell say that the interview was one of the most impressive he had had. It also made Pharrell get Nardwuar an interview with Jay Z.

Pharrell was so taken to Nardwuar that he convinced Jay z to allow Nardwuar to interview him. Of course, Nardwuar had asked Pharrell for the link-up. Pharrell delivered because a few days later, Nardwuar got a chance to interview Jay Z.

So, it’s funny because that interview was awkward from the startup until the end when Jay Z had to respond with “doot doo.”

The interview was mostly awkward because Jay Z refused to let go of his cigarette.

He took his souvenir from Nardwuar, held it up with both hands and his cigarette still in one of his Hands. It was also possible that because of the short time they had to prepare for the interview, Nardwuar couldn’t get a better souvenir for Jay.

In this 2010 interview, Nardwuar and Snoop got together again after four previous interviews. All of their interviews together are good viewing content.

This fifth one stands out and is a personal favorite of many people because of the beginning. Show me another interview that commences with Snoop Dogg putting and leaving a blunt in a microwave for 11 seconds in his Vancouver hotel room to “trap the ingredients.”

Also, Snoop spoke on why he wore a Toronto Maple Leaf’s jersey to the Arsenio Hall’s show. He said it was because it reminded him of a blunt. That was Snoop Dogg speaking.

It is fun to watch an interview when the interview goes from flustered to utterly impressed in a matter of seconds. Simply because of how much Nardwuar the serviette human knows about them.

Now, certain rappers didn’t understand Nardwuar’s approach or appreciated him digging deep into their lives. For example, kid Cudi. Kendrick appreciated it, though and was impressed by it.

Kendrick was pumped for the interview. The interview was in 2012. One of the major highlights of the interview was when Nardwuar asked about Kendrick’s 7th-grade rap partner. For a few seconds, the Compton, California native is perplexed by the name dropping. He did not believe it.

Many people think that Drake’s 2016 interview with Nardwuar was their first interview together. Although it lasted for almost an hour, it wasn’t the first time they were speaking.

In this 2016 interview, Drake talked about writing a song with Beyonce that didn’t make her album, his pin-ping escapades with Stephen Curry, and so many other things.

His first interview with Nardwuar was way before 2016 one. The interview was before Drake became Famous-Drake as we know him now.

His excitement was palpable. You could tell he couldn’t believe he was in an interview with Nardwuar. The interviews were brilliantly conducted, but people choose the 2016 interview as their favorite until they watch the older one. Drake was in his element.

This interview arguably has one of the best Nardwuar closings to date. A$AP had his entire Mob in the building with Nardwuar, and you know what they say- “the more, the merrier.” It was indeed a merry ride for the viewers and A$AP and his Mob.

Nardwuar, the human serviette, is one of the best interviewers in the world. He has the skill, talent and experience on his side. Media personalities should emulate his technique. He has made quirky and eccentric endearing in ways that we didn’t know it could be.

His commitment to his craft hasn’t dwindled even with the entire backlash he has received for years. He upholds the narrative that your dreams are worth fighting and living for, and we love it.