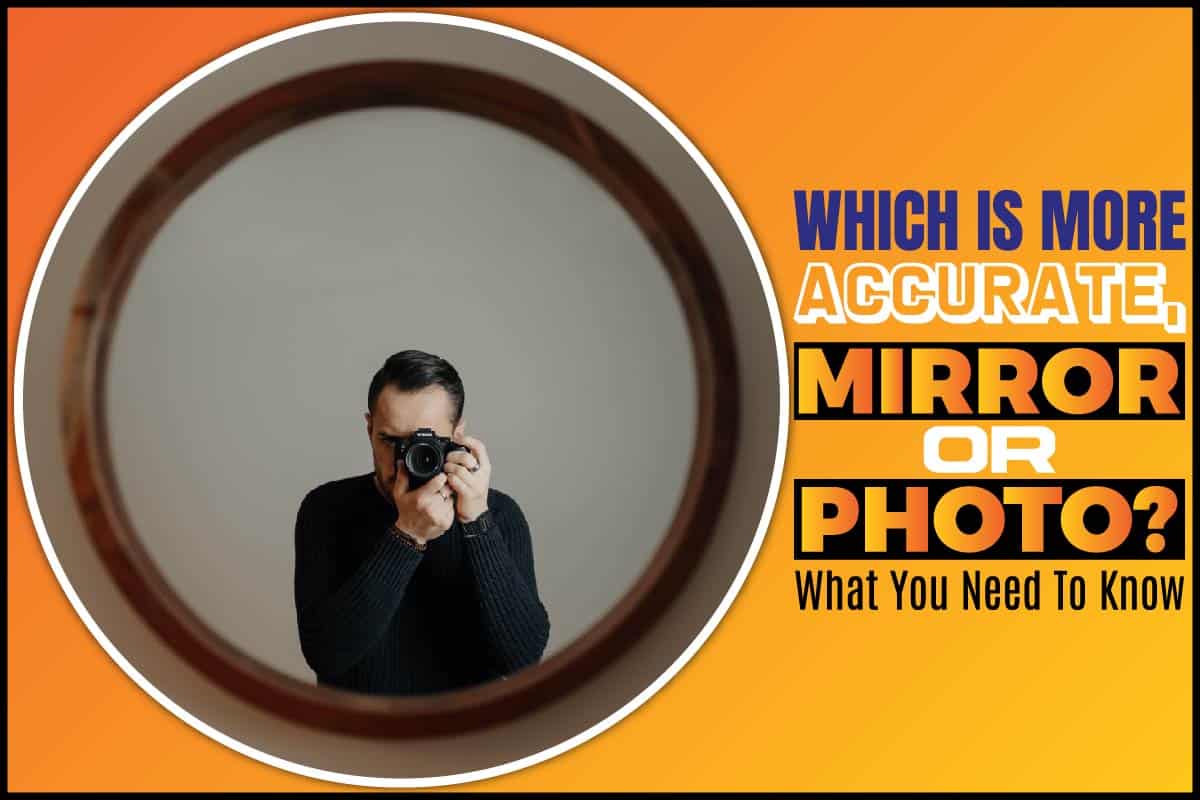 Mirrors and photos work using different concepts; thus, they produce different results. For example, you might want to look at yourself, and you have options to use a mirror or take a photo.

Which one of these is more accurate? And what factors make it better than the other?

Mirrors have been used for years before the camera was invented but did we have a valid reason to replace it? Let us get down to the details and answer this;

Which is More Accurate, Mirror or Photo?

Mirrors produce more accurate images than photos. This difference is because a mirror merely reflects the object and reverses it from left to right to create an image without any quality alteration.

On the other hand, a camera shows you what other people would see, and it is dependent on environmental entities that affect the quality of the photo.

Why Do You Look Better In A Mirror than In A Picture?

You probably have looked at yourself in a mirror and thought you looked excellent, but you don’t look as good as you did before when your picture gets taken.

So what brings up the difference and makes you look better in mirrors but not so good in photos?

1. A mirror only shows the image without alteration

You won’t see how other people see you; you will see yourself inverted left to right.

The mirror produces an image that is of similar quality to real life. The image formed on a photo is how people see you.

A picture is affected by the quality of the camera, the lighting in the environment, and many other factors. These factors tend to compromise the quality of a photo, and that is why you look better in a mirror.

2. Our brains cause optical illusions

How often do you look in a mirror? Compare that with the number of photos you take.

You realize that you look in a mirror more often than you take pictures. You are at your mirror while making your hair, putting on makeup, shaving, brushing your teeth, and many more times.

This constant use makes your brain stick to the image of you in a mirror. To other people, you look okay, but it is worse to you because you are used to the image in your mirror. Seeing a photo distorts your familiarity with yourself, thus making you think you look awful.

3. Images are affected by angles, lenses, and cameras

For example, a photo is affected and will look blurred from certain angles, making you look worse.

In addition, the lens of the camera or phone you use will affect the quality of your photo. Lens distortion can occur depending on how far away you are from the camera, and it can change how you look in a photo.

For example, it could make some facial features look bigger or stretched out than they are.

Properties Of An Image Formed By A Mirror

Now that we have established a mirror with much better quality than a photo let us get into the mirror’s workings to understand some of its image properties.

What Are The Factors That Affect The Quality Of A Picture?

There is nothing as frustrating as taking a photo with your phone or camera and having it look so much worse than the real-life scenario.

To get better pictures, you need to understand the factors that affect a photo’s quality, and some of them include;

Something that most people don’t know is that the sharpness of a photo is a subjective notion. It is a combination of acutance and resolution.

The resolution is the number of pixels in a camera, while the acutance refers to the photo’s contrast.

The exact amount of sharpness and its effect varies among people, but the general idea is that a sharper photo is of higher quality.

This is because it will have more contrast, and it will come out less blurry, which is why cameras with more pixels take better photos.

Image scaling refers to the aspect ratio and size of a photo depending on where it is used. The aspect ratio is a proportion of width and height expressed as numbers in ratio form such as 16:9.

Using the proper aspect ratio will boost the quality of your photo. The most used aspect ratios are 1:1, 4:3, and 16:9. However, all these are used in different fields, thus will affect the quality.

For instance, 4:3 is commonly used in TVs, computers, and tablets; a picture in this aspect ratio will look blurry on a phone since it’s not meant for such a small screen. The photo sizes are also significant, and they are considered in terms of the number of pixels.

The best photo size is 1920×1080 pixels, and it is FHD quality used for broadcasting, mobile devices, and the internet.

You could also opt for 1280×720 pixels, HD, that work on wallpapers for laptops, tablets, and smartphones.

In photography, distortion refers to changes that make a straight line bend. Distortions happen when the object being captured has parts that are at different distances from the camera.

If a photo of you is taken and you are very close to the camera, there is bound to be distortion. The easiest way to get rid of distortions is to move further away from the camera.

Digital noise is a disorder made up of pixels with random brightness and colors, and it is often a problem when taking photos in low light.

In addition, the ISO might worsen since there is no way to know the best setting other than trial and error.

It would be best to experiment with different settings to see which will work best before picking on a final one to use. If you cannot get a good-quality picture, you would be forced to edit it to enhance the quality.

The exposure or dynamic range is a ratio of light intensity determined by the features of your camera and those of the object. A camera with a higher dynamic range will produce pictures with better detail and quality.

It is crucial to capture the colors correctly to get good-quality images. Shoot all the pictures RAW, then adjust the color in post-production editing.

Tips To Make You Look Better On Photos

Now that you know what affects the quality of photos, you need a few tips to guide you on how to take the perfect photograph;

A mirror is more accurate than a photo since it is not affected by environmental factors. A photo itself is not bad in comparison; it just seems terrible compared to the image you are used to seeing in a mirror.

You could be keen on some details to help improve the quality of your photos. For example, before you take a picture, get a nice outfit and pose, then smile for the cameras. It is best to edit after taking the photos to ensure you don’t ruin the shots.

Is Yogurt A Liquid? Read To Find Out