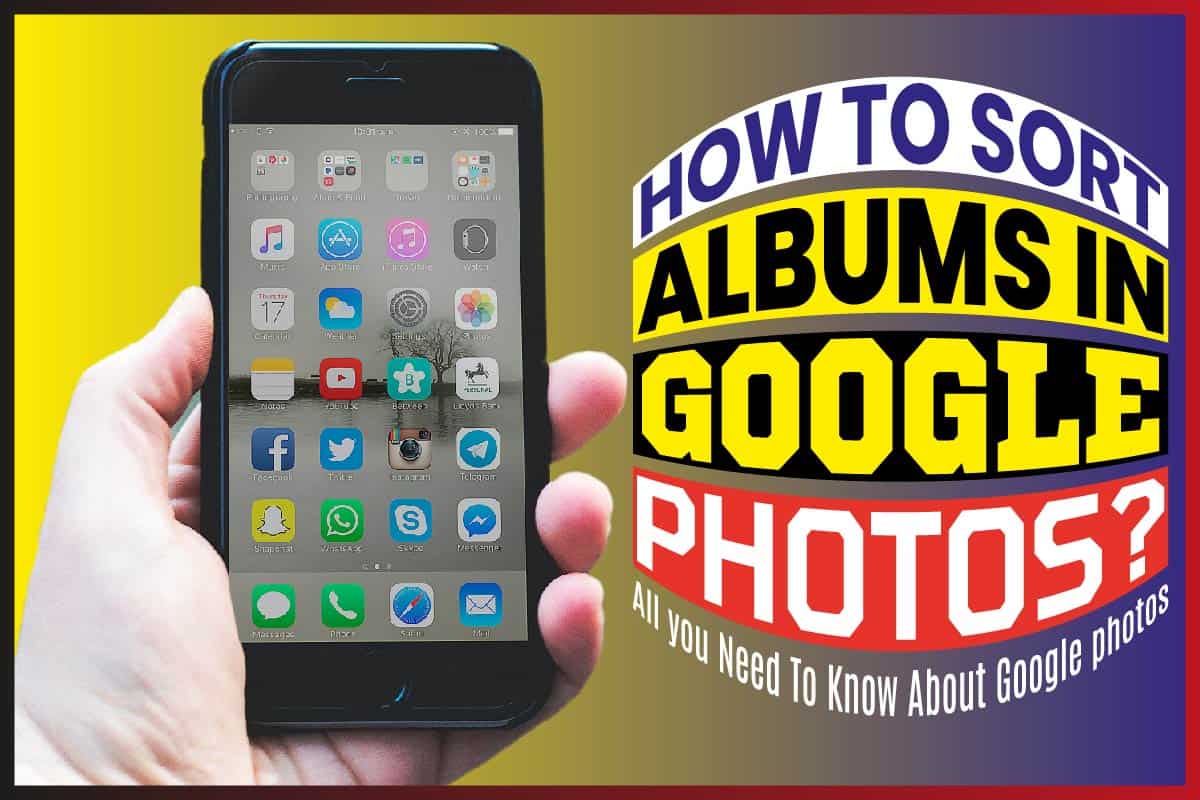 Google photos app is a simple and easy-to-use app. The app is similar to other gallery apps like the Samsung gallery.

However, Google photos offer convenience across all your devices. You can also back up your photos, which can be accessed across multiple devices.

In addition, the Google photos app has other great features like automatic organization and intelligent search tools.

Users now have several options on how to sort the pictures in their albums. Album sorting is an effortless thing to do; here is a detailed guide.

How To Sort Albums In Google Photos?

To sort your albums:

The icon is a pair of arrows pointing in different positions. Click on the icon, and you’ll be given several sorting options, which are recently added, newest first, and oldest first. Choose the most preferred choice.

Google photos are one of the best of Google developments. It can be accessed from both android and IOS operating systems.

The images can be analyzed and arranged into different groups. The system is intelligent in that it can identify various features like beaches, snowstorms, and even skylines.

When searching through the photos, it gives options in three major categories: people, things, and places.

In the people category, the system analyzes people’s faces and groups them. Photos with similar photos are grouped.  It’s also able to track the faces as they age; this is so interesting.

When it comes to places, Google has employed the use of geotagging data technology. However, it can also identify areas by recognizing the significant landmarks.

The category of things groups pictures according to birthday, concerts, graduation, food, buildings, and posters. However, the system can make errors; you can manually remove any categorization errors.

You can access your files, i.e., photos and videos, while offline. So don’t ever be worried when your cellular or internet connection is poor.

With the tap of a finger, you can transform the look of your photos. It has simple but powerful editing tools that can apply filters, crop, and adjust colors.

You can share your photos and videos through links, and the images do retain their incredibly high quality.

In addition, it’s easy to select various images with a swipe of the finger and share hundreds of pictures. They can be transmitted through email, text, or social media networks.

The Google Photos memory is a very significant addition. It pulls out old photos taken on specific dates in the previous years. Its display is beautiful; it displays images in familiar full-screen format.

The images automatically swap to the next. Alternatively, you can manually click on the photos to advance.

The Google photosystem removes any duplicates and only highlights the most excellent quality pictures.

The photos under “high quality” have up to 16 megapixels, while the videos have up to 1080 pixels.

The original quality, as the name suggests, keeps the actual resolution of the videos and pictures.

Google gives you the chance to create and share albums with friends and family. In addition, you can share the photos directly to anyone having a Google account or create a sharable link.

To share albums, you must first sign in to your Google photos app. Next, tap on pictures on the left of your menu.

You then choose the image that you want to be included in the album. Next, tap at the three-dotted icon at the top right of your screen and select “add album.”

You’ll be given two options, tap on +new album and edit the album’s name. Next, add more photos, tap “add photo,” and select.

After adding images to the album, tap on the Share button to invite others to view the album. Those who do not have google photos can see the pictures and even add a new one to the album via a link.

It has always been the best available option. However, the recent policy changes on storage will make you start looking for other alternatives.

Instead, Google will offer 15 GB of space across the different Google accounts: Google Drive, Gmail, and now Google photos.

Unfortunately, the 15 GB space won’t last long, and this will force you to start looking for Google photo alternatives.

It’s a perfect choice for existing Adobe users. If you are currently using the Adobe Creative Cloud, its cloud is the most viable option for Google photos. However, Adobe is the most expensive alternative to Google photos.

The access to the lightroom and 1TB storage costs $9.99 monthly. At the same time, the subscription to other Adobe apps with storage of 100GB is $52.99 monthly.

Another downside of Adobe is that files are only encrypted when in their servers. So using the Adobe Creative Cloud on a public network is not as secure compared to other providers. It’s because the files are not Transcripted when in transit.

It’s the best available alternative to Google Photos.  Just like Google, it’s easy to use, so reliable, and secure.

However, Microsoft One Drive was not designed for photo and video storage. However, it can be dabbed as all rounds.

The great thing is that it’s compatible with several devices, including IOS, has rich features, and is secure.

It provides end-to-end encryption for essential files. Its interface is also exceptional; it has a dedicated photo section that allows users to scroll through their photos. It offers 5GB free storage and maximum storage of 6TB.

Microsoft OneDrive has excellent plans: 100GB plan price is $1.99 monthly while 1TB is priced at $6.99 monthly.

In addition, the 1TB plan comes with additional access to the Microsoft apps like Microsoft Excel, PowerPoint, and Excel.

The I Drive is excellent because of its high storage capacity and low cost. It’s exceptionally affordable.

Like Microsoft One Cloud, it was not designed to store photos and videos. However, it can be an excellent option for those who want maximum storage at low costs.

So if you are the kind that manages an extensive image library, it’s the best for you. It’s an excellent tool for amateurs and professional photographers.

The other great thing about I Drive is that it’s highly accessible. It’s also reliable and can run on various operating systems like windows, IOS, and Android. You can also access your files from any web-enabled device.

When it comes to security, I Drive data is well encrypted when resting in their servers or transit.

In terms of affordability, security, and excellent features, I can vouch for apple. Information is encrypted while in both rest and transit. So don’t be worried when using public networks, Apple has you covered.

Apple photo is pre-installed on all Apple devices. This will save you from the pressure of downloading and installing it.

The most remarkable thing about Apple photos is it’s deeply integrated with the iCloud systems.

It can be accessed from the iPad OS, Mac OS, iOS, and Mac OS. In addition, when logged into your iCloud account, you can access your files from any device.

The dropbox is among the oldest storage clouds. It was introduced in 2009 and has continued growing strong ever since.

Dropbox has some great features like a simple, powerful interface. Its security is top-notch and is easy to use.

DropBox Pro is end-to-end encrypted security, and your information is safe while resting at the servers or in transit.

It has a maximum storage of 3TB. Dropbox has excellent plans. For $9.99 monthly, you get access to 3TB storage.

However, it would be best if you had a more practical storage option. You can go for 3TB storage at $16.48 monthly.

Managing Google photos is not as challenging as many people think. Organizing the images is so enjoyable and easy.

If you are looking for a platform that can help you keep and share memories, Google is the best option.

The files can be accessed from various devices, and you can also back up your photos and images.

It also has a primary editing interface that will give your photos a great look. In addition, it has a Google assistant that helps create albums, stories, and videos for your great stories.