Is Prison Really That Bad? — Different Sides Of Prison 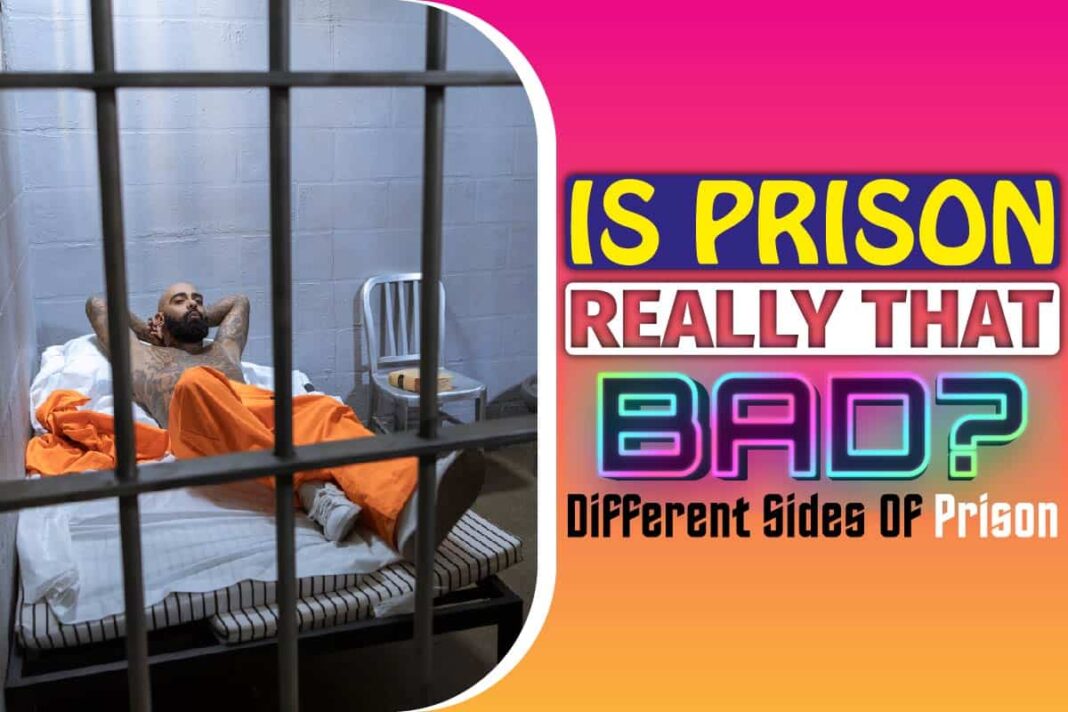 If you ask what prison life is really like, you will hear about its positive and negative aspects. However, people talking against it might outweigh those who talk for it. Prisons throughout the world mostly consist of the worst living standards and conditions. The question is, is prison really that bad?

It is true that prisons are created to punish those whose actions were against the law. The whole purpose is to help those people improve themselves, but they are rather treated inhumanely in many places all over the globe.

Even if prison can be an enclosed place full of torture for some people, it can also be the place for some people to be able to actually survive, which might not be the case if they were out free in the world.

Is Prison Really Good For Rehabilitation?

Often people tend to think that prisons are the best place as they can be a great rehabilitation for the prisoners. However, it is nothing but a misconception. Prisoners are rather treated inhumanly, even by their inmates. Many might get bullied or create issues that could be dragged once they are free out in the world.

There is no guarantee that all of the criminals will improve themselves, but it would be wrong to conclude that there aren’t ones who do. Some of them tend to learn out of the worst situations and later ends to give out positive outputs and contribute to society.

Talking about the strict schedule and time in it, it can be quite a resentful experience. From having to wake up very early in the morning to the working hours and the eating time, it can all be nothing but like that of a boarding school but worse.

Prisoners are expected to wake up very early in the morning and start their day. Of course, nobody has a choice, and those who try to resent don’t end up being in a good place. As a result, adjusting to the time schedule is what the criminals need to end up doing, along with the obvious prisoner lifestyle.

All the prisoners are assigned to certain works, be it outdoor or indoors. Hard labor is what they are expected to do, and there is no going back unless you are set free altogether.

Although it is a good thing that the prisoners get to be engaged with the basic life chores such as doing laundry and cooking, it might not be a pleasant experience for those who once used to be from a good background.

While the closed cage can be a hell on earth for some people, it doesn’t have to be the same for a few. On the other hand, a matter that needs to be talked about is the abuse by the guards or inmates.

Either you will make great accomplices, or enemies that might give you a hard time later on, but that’s if both the party is set free.  In contrast, some prisons around the globe also come with great facilities, including providing education and classes to those interested.

Such initiative tends to later give out a positive outcome in society. Furthermore, the lifestyle in prisons can vary from country to country, and the living condition also depends on it.

There’s no doubt that having high expectations from the food provided in prison will lead you to nowhere but disappointment. However, it will be wrong of me to say that I agree totally with the statement. Yes, the food there might not be as rich in nutrients as that of the outside world.

It might not be as flavorful and mouthwatering comparing to something made in the restaurant or at home. Those dishes are meals that will help you get through life and survive.

While it can be a lavish meal for criminals who could barely afford a day’s meal in the outside world, it can be nothing for someone who had a better luck once in their life.

There are people who even committed crimes just so that they can get something in their stomach for free after being on a hunger strike for days or weeks.

One of the drawbacks of prison is undoubtedly being submerged in the feeling of loneliness. Even though some might have inmates, it is not the same for all the cases. Living and repeating the same lifestyle without having a companion can be even worse.

This might be a lot for one’s mental health as being able to share emotions and feelings help us humans to feel lighter from within. In some cases, prisoners who serve a long jail time turn out to build severe mental issues. Furthermore, getting back to the normal life once set free can be very hard for them as well.

Well the idea of prison has been heavily stereotyped through movies and drams when it isn’t exactly how it is showcased. Yes, it can be worse, but it can be better at the same time as well.

There are a lot of opportunities that many prisons offer prisoners. Such examples may include workshops, classes, teaching various skills, etc. As a result, it helps the prisoners improve as a person and earn skills that may help them later in life.

Many prisoners receive GED classes, seminars, and dozens of classes which help them earn knowledge that might not have been the same otherwise. As a result, the possibility of getting a job or perceiving further education once they are out, becomes easier.

Bible reading sessions and classes at the church also help to cleanse their soul and look at the world differently. Positive changes have been seen in those who attended those classes regularly.

There are prisons that allow the captured people to enjoy themselves through the various activities they offer. This helps them to learn new things but stay healthy and fit side by side.

These may include basketball games, art workshops, learning cooking, and pottery skill. Many also offer yoga sessions, prison theatre, and many more. This helps improve their behaviors towards people and the world and helps them work with people through various means of learning.

Probably one of the worst things that can happen to a woman is getting jail time during pregnancy or getting pregnant in prison. Not only are the conditions very harmful to the mother but the baby as well.

Not getting nutritious food, having to sleep on thin mattresses, and not getting proper sanitary equipment can ruin the health of the prisoner. It can also be a hard stake on their mental health because the pregnancy becomes much harder when it is already very difficult to deal with.

Furthermore, in cases of emergencies, things might go wrong as well. It can take a lot of time to notify, and then verify that the prisoner actually needs to go to the hospital can make things worse. Since the prison medics cannot do much about pregnancies, it is obvious that the patient needs to be taken to the hospital.

However, calling for the ambulance and making the mother wait might be risky as time matters a lot. It gets even worse if the prison guards aren’t cooperative and don’t seem to care about the pregnant prisoner much.

Lastly, having to deal with post-pregnancy stress and disorder might make the person very much mentally ill. Having to go to prison post-pregnancy can be a lot to deal with. It gets even worse as you cannot get to keep your newborn to yourself.

The idea of prison has been broadly systemized into people’s heads as something horrible and gruesome due to all the stereotyping showcased through various media.

We often see how directors and script writers showcase it as a place where only horrible acts occur. This, as a result, ruined the point of view for a lot of citizens and viewers around the world.

What they forget to portray is the good side of it and how it can also be a place for people to reflect on their wrongdoings and improve themselves and their morals.

Furthermore, you can also see how they will put more black actors as prisoners, making the race look inferior compared to others. This is nothing but one of those racist stereotypical acts. Although the light has been put into matters as such these days, we might see improvement in the future.

So is prison really that bad? There can’t be a proper conclusion or side that can be taken to answer this question. It can be both bad and equally good compared to the laws imposed based on the country and its living conditions. However, it is also up to you what you make out of it as you do with life.