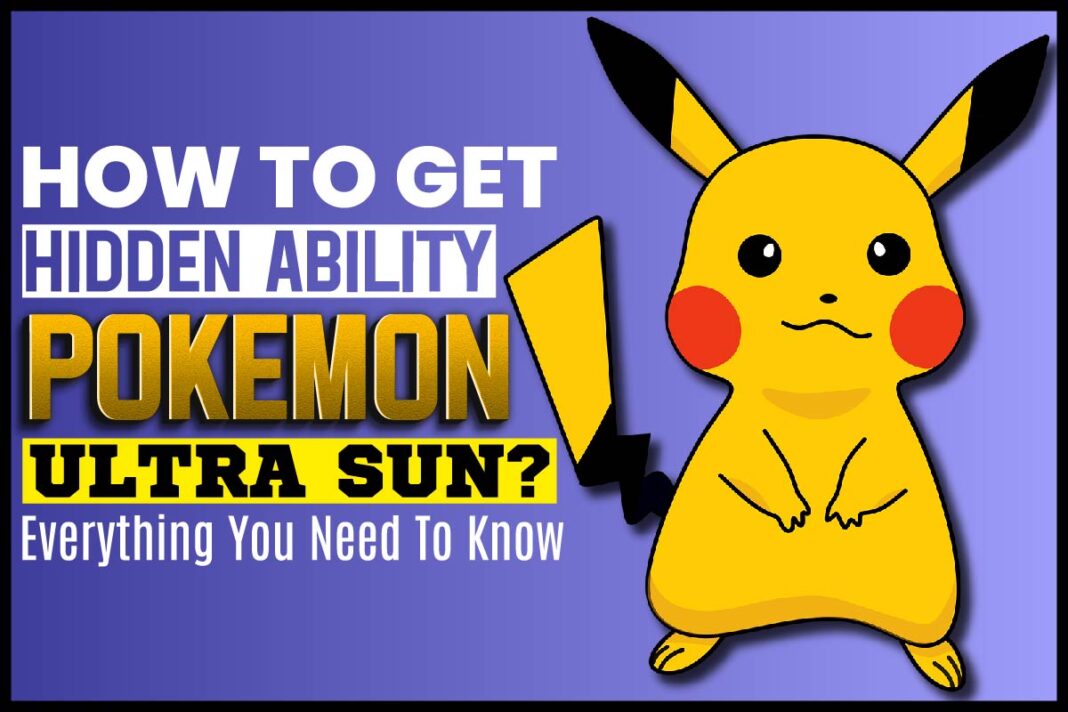 Pokémon, a popular Nintendo video game developed by Game freak, has caught the interest of many gaming fans worldwide. The question on many people’s lips is, how to get hidden ability Pokémon ultra sun.

The easiest way to get the Pokémon hidden ability is via SOS battling. This refers to a situation where Pokémon calls for help once they are fighting and losing a battle, and an additional Pokémon shows up.

This means that you’ll have to look for hidden abilities through alternative means and replicate them through breeding.

In Gen 7, one of the best ways of finding new hidden abilities besides trading with people is through SOS chains. To make it easier for you, you need to search for the SOS chaining guides.

However, the basic idea is, if you knock out 10 Pokémon consecutively, the newer ones have a slim chance of getting their hidden abilities.

The more Pokémon you knock out, the higher the chance rises, therefore reaching the maximum of 15 percent. Furthermore, there are many ways of checking the abilities of a wild Pokémon.

For SOS chains, one of the best methods is to leverage a move that copies or changes the ability of the target. This will make the game briefly display the target’s abilities.

If your lead Pokémon possesses the ability trace, it’ll lead you to the wild Pokémon’s ability once the battle starts. Also, you can find hidden abilities in horde battles.

The Top 10 Hidden Abilities In Pokémon Ultra Sun And Moon

Do you remember when we were introduced to the hidden abilities in Gen V and how difficult it was to get one? Although things became way more accessible by the time we upgraded to Gen Vii, we’re grateful to Arceus for making it happen.

If you are looking for tips or suggestions on how to get hidden abilities in Pokémon gen 7, then you’ve made the right choice by choosing this article.

Here’s a list of the best-hidden abilities in Pokémon

This is a unique hidden ability, though; the only setback is that it is restricted to a few Pokémon, making it somewhat competitive.

For those who don’t know much about the tinted lens, what this ability does is to ensure that your Pokémon’s ineffective moves are effective.

In principle, what this means is that it can double the effectiveness of your swift moves.

It allows you to transform your Pokémon into a powerhouse for major-game battles. It’s a pity that it is limited to the bug-flying Pokémon called Butterfree, and you can’t bring it to battle.

Everyone loves scrappy pangoro from the Ultra sun and ultra moon, and to be realistic, this hidden ability has no concrete battle application similar to other entries on this list.

However, it makes up for it with how valuable it is. Scrappy enables you to use normal moves to hit ghost types, and it’s a big deal, right?

If you get what I’m saying, then we’re in the same boat, and I feel your pain, and Pangoro will take care of your pain.

Sturdy is fantastic, but it’s not a super magical Illuminati-type hidden ability. Some Pokémon have it as their hidden ability, which was why I fell in love with it and included it in the list.

Sturdy hidden ability allows your Pokémon to endure a one-hit knock-out move which is why everyone wants it.

It is ultimately a focus sash helplessness form that is very powerful.

This is a hidden ability that almost escaped my mind because only one Pokémon has access to it, and it’s the Talonflame line.

The effect of the Gale Wings is that it makes your flying moves a priority whenever you’ve got full HP.

Your first move in any battle will become a priority, and this is a valuable asset that you can have while in a competitive format.

To explain it in a simpler term, if your Pokémon hits hard and hits first, you’ll win the battle.

The lightning rod is one hidden ability that I’m proud of especially when it’s on the Pikachu line.

If you or someone makes an electric move while a Pokémon with a lightning Rod is on the field, the action will be invalid, and the ability holder will get a special attack boost.

This is ok for everyday battles. However, the official video game championship format is doubled, which means that a lightning rod Pokémon can still suck in moves made to hit their partner.

However, you can strike it with an electric-type move to give it the much-needed boost that it desires, and it can be convenient.

The infiltrator hidden ability is a gem; however, the Pokémon you may want to use it with may not have it as its hidden ability. It might be a regular ability.

With that said, regardless of whether it is a hidden ability or a regular one, the infiltrator is still a fantastic ability which is why I had to list it.

If you’re using a Pokémon like Crobat, you’ll be able to use the infiltrator ability, which can transform the Crobat into an underused modest battler.

With the appropriate setup, the infiltrator lets you build a sweeper that entirely disapproves anything your opponents throw your way and getting the better of them in the process.

Mewtwo, Haxorus, and Tyranitar are three great examples of uber Pokémon with the Unnerve as their hidden ability.

This should go a long way to telling you all you need to know about the Unnerve hidden ability. Also, unnerve is an ability that is very easy to understand.

What unnerve majorly does is to stop your opponent’s Pokémon from consuming berries. When you combine this with what the ultra sun and ultra moon Pokémon has, you’ve now transformed it into a powerful and technical competitive ability.

To make use of the Unnerve hidden ability, you need to have a sound knowledge of competitive setups, which is why this ability is mainly used at the highest levels of gameplay.

Only one Pokémon can access the magic bounce as its hidden ability, and it is the Espeon.

I’m a massive fan of Espeon, and the magic bounce ability is fantastic regardless of whether it is visible or hidden.

What this ability does is to bounce back non-attacking moves toward your opponent. For instance, obstacles like spikes, stealth rocks, and toxic spikes will be set up in your rival’s field and not yours.

If you use your magic bounce correctly, it’ll help you win the game, or at worst, you’ll gain a tempo.

Moxie is one incredible hidden ability that many people are searching for because it lets you have one stage of attack every time you knock out another Pokémon.

Now, to reveal the Pokémon with Moxie as their hidden ability, it’s the Gyarados. If this is your first time hearing this, you can do more research on it if you wish.

Most people always underestimate the Magic Guard, but I’m here to tell you that the Magic guard can easily pass for the best-hidden ability there is in all of Pokémon Gen VII.

The Magic guard stops your Pokémon from incurring damages from indirect attacks from your opponents. What this means is that you can only incur damage from direct attacks more than anything else.

Furthermore, it means that status ailments, Leech Seed, Pain Split, Life Orb, weather conditions, and entry hazards will all bounce off and not harm you.

Meanwhile, the only Pokémon with the Magic guard as their hidden ability are Kadabra, Abra, and Alakazam.

However, if you can lay your hands on the mustached threat, you already know he’s very powerful the way he is, and when you now add the Magic Guard, he’ll become even more powerful.

Breeding the Pokémon with Hidden abilities

Once you have caught a Pokémon with a hidden ability, please take it to the Pokémon Nursery, where you’ll breed it.

There is a 50 percent chance that you’ll pass the Pokémon’s hidden ability to an offspring.