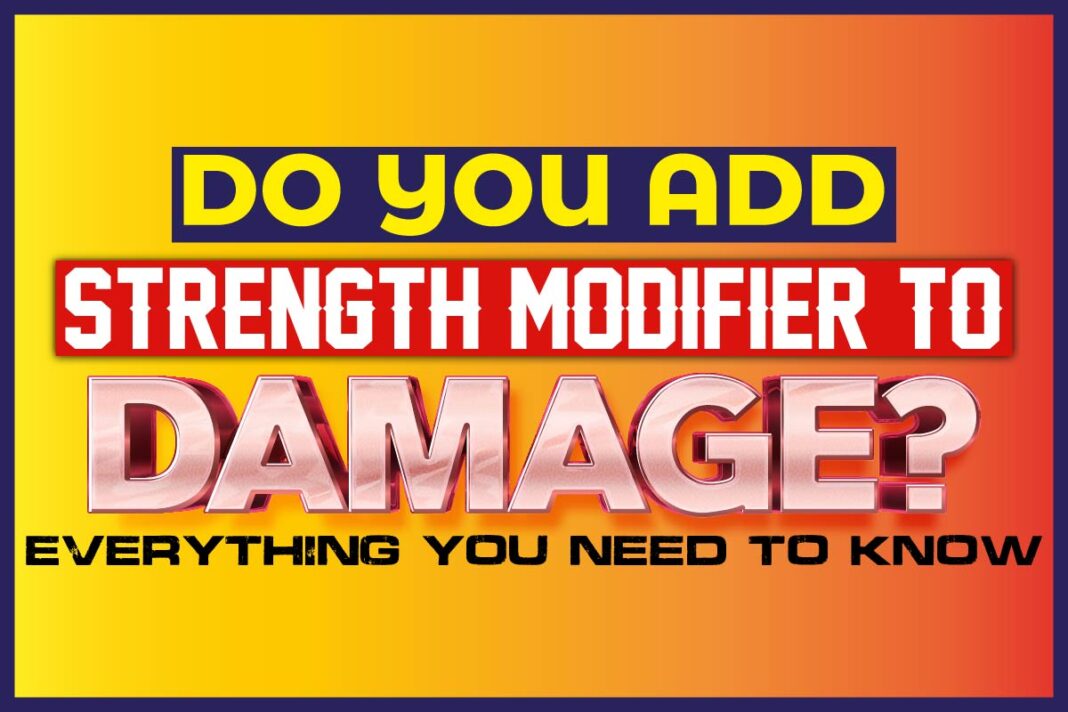 For most of the melee attacks, you can add an ability modifier straight to the damage. However, there are a few exceptions to the rule, like how an offhand attack does not make you eligible for a bonus.

Usually, you should be able to add your strength modifier to damage. However, you can also add Dex for finesse weapons.

It will interest you to know that you don’t need to add your ability score to any damage for some spells.

There are six abilities that describe every creature’s mental and physical traits, and they are;

Is a character insightful and muscle-bound? Charming and brilliant? Hardy and nimble? The ability scores will define these fantastic qualities, not excluding a creature’s weaknesses and assets.

There are three significant rolls of the game, namely the saving throw, ability check, and the attack roll, and they all depend on the Six Ability scores.

Each creature’s ability has a score; it’s a number that tells you how great their ability is. An ability score does not just measure innate skills; it covers a creature’s level of competence and training in all activities related to their power.

An ability score of 10 or 11 can be in the expected average range. However, monsters and adventurers are a bit above the average when it comes to most abilities.

The highest score anyone can ever reach is 18, though adventurers usually have scores that are as high as 20, while divine beings and monsters have incredible scores like 30.

Furthermore, each ability has a modifier that is gotten from their scores, and it ranges from -5 (for a score of 1) to +10 (if you score 30).

In most cases, the spell or unique ability will let you know that you have a disadvantage or an advantage on your ability check, an attack roll, or a saving throw.

However, when it happens, you should roll another d20 when you’ve made the roll.

Then use any of the two rolls that is higher if you still have an advantage. On the other hand, you should make use of the lower roll if you have a disadvantage.

Furthermore, if there are multiple situations that are affecting your roll and each of them offers you an advantage or imposes a disadvantage, do not roll more than one extra d20.

For instance, if two favorable circumstances grant you an advantage, you just have to roll only one extra d20.

However, if a situation makes a roll to have both an advantage and a disadvantage, you’re thought to have neither of both so that you can roll just one d20.

If you have an advantage and possess a feature in the game like the Halfling’s lucky trait, which allows you to reroll the D20, you can only reroll one dice.

To put it in a clearer perspective, if you have a Halfling with a disadvantage or an advantage on an ability check, it rolls a 13 and a 1; the Halfling can leverage the Lucky trait and reroll the 1.

By using your actions, special abilities, spells, and inspirations, a character can gain an advantage or a disadvantage.

The proficiency bonus can be used in saving throws, ability checks, and attack rolls.

A proficiency bonus cannot be added to a die roll or any other number beyond once.

For instance, if two rules say you can add a proficiency bonus to your wisdom saving throw, bear in mind that you can add the bonus just once if you make the save.

So, if you have a situation where you can apply your proficiency bonus more than once to a particular roll, add it just one time and divide or multiply it only once.

By the same rule, if an effect or feature lets you multiply a proficiency bonus while having an ability check that would not offer you any benefit to your proficiency bonus, please don’t add the bonus to your check.

Your proficiency bonus will be 0 for the check because once you multiply 0 by any figure, the answer remains 0.

For example, suppose you don’t have proficiency in history skill. In that case, you can’t benefit from a feature that allows you to multiply your proficiency bonus once you make intelligence checks.

Overall, do not double your proficiency bonus for saving throws or attack rolls. If an effect or feature lets you do so, the above rules apply.

Ability checks are used to evaluate a monster or character’s inborn talent and training to overcome challenges.

The Game Master can call for an ability check whenever a monster or character carries out an action that has a substantial fail ratio. However, if the outcome is not certain, the dice will determine the result.

For all ability checks, the game master will decide which among the 6 abilities is relevant to the job at hand, and the difficulty class will represent it.

The more challenging a task is, the higher its difficulty class. To get an ability check, you need to roll a d20; then, you must add the necessary ability modifier.

Just like other d20 rolls, you need to apply penalties and bonuses and then compare the total of what you have to the difficulty class.

If the total exceeds or equals the difficulty class, it means that the ability check was successful and the creature overcame the challenge before them.

However, if the creature or character made no progress towards their mission or made progress combined with many setbacks that the game master determines, it is deemed a failure.

In most cases, a monster or character’s efforts might be directly opposed to both of them. When this happens, it means both parties are doing the same thing, and only one of them can succeed.

For example, they can both be trying to pick up a magic ring that fell on the floor. This situation also comes to play when one of them wants to prevent the other from achieving a set objective.

For example, in situations where a monster wants to open a door closed by an adventurer. When this happens, the outcome is determined by a particular type of ability check that we all know as a contest.

Both contestants in the contest will make ability checks that apply to their efforts.

All the appropriate penalties and bonuses will be applied, and instead of to compare the total to a difficulty class, the sum of the two checks will be compared.

The winner of the contest will be whoever has the highest check. The monster or character that wins will either prevail in action or stop the opponent from succeeding.

However, if the contest ends in a tie, the situation will remain the same way it was before the contest began. Though, if there has to be a winner, the winner must win by default.

If two contenders in a contest try to pick up a ring on the floor and none of the characters gets it, it means there is a tie.

Similarly, in a contest where a monster wants to open a door and an adventurer is also trying to make sure the door doesn’t open, if the door remains closed, then there is a tie.

Each ability can cover a wide range of capabilities, like skills that a monster is good at. A skill is a specific area of your ability score, and a character’s proficiency with their skill shows how focused they are in that regard.

For instance, a dex check can reflect a character’s ability to carry out an acrobatic stunt, stay hidden, or palm an object.

Dexterity has multiple associated skills like stealth, Acrobatics, and Sleight of Hand.

This means that a character who has expertise with stealth skills can be outstanding at dexterity checks related to hiding and sneaking.