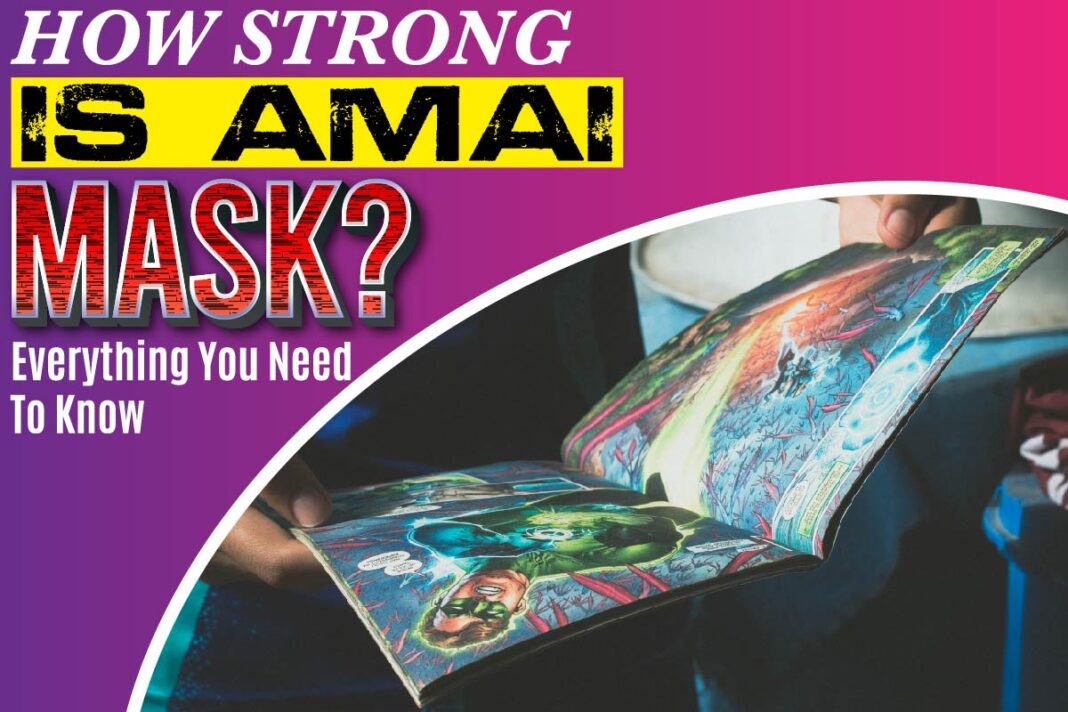 Amai Mask, widely known as Sweet Mask, is one of the characters in the Japanese anime series called One punch man. Sweet Mask is tall, with a lean body build, light blue hair and yellow eyes.

Many fans of One punch Man perceive him to be very handsome.

Amai Mask declared that he believes that heroes ought to protect the citizens, and if they are unable to do so, they must strengthen themselves to offer protection to their citizens.

Mask has a massive following as many people love and cherish him for his charismatic way of communicating with people.

Mask genuinely wants the best for the people around him and wants them to always be happy in this world. He can go far and beyond to stress himself just because he’s looking for new ways to make his fans happy.

However, Amai Mask also has a dark side, and he has a secret merciless nature. He hates anything evil, including those who are known for assisting evildoers.

Once Sweet Mask declares something or someone as evil, he’ll destroy it immediately.

For instance, this is evident when he mercilessly executed a group of aliens captured from the Dark Matter thieves as he branded them evil.

Sweet Mask claimed to have served justice on the spot after dispatching the aliens.

On another occasion, he was asked to bring a runaway caveman to the lab, and he ignored the instructions of his superiors and executed the caveman instead.

When it comes to the quest for justice, Sweet Mask has no issues getting the work done. Sweet Mask almost attempted to kill brainwashed innocent victims such as Narinki’s private warriors, and he also considered killing the disciples of fellow heroes Atomic Samurai.

Amai Mask is known to follow any guideline that helps to make heroes widely loved and popular.

Furthermore, Sweet Mask knows that promotion to A-class or S-class will do his reputation so much good and make him more popular and get the much-desired attention he craves.

Sweet Mask found his way to A-class rank 1 position, where he was able to help prevent undeserving heroes from being promoted to S-class.

He also portrays himself as a famous hero with a high status in society while also demonstrating a narcissistic and high opinion of himself.

Sweet Mask is more concerned about his reputation and status that he was willing to go as far as killing all the S-class heroes that were present at the raid.

He planned to kill them to make sure the Hero Association never heard of his failures against Fuhrer Ugly and how he lost his cool. However, Sweet Mask regained his composure and didn’t carry out the plan.

Amai Mask is obsessed with beauty overwhelming power as he mentioned his ideology that heroes ought to be beautiful.

This was when he took an interest in a worthy S-class hero called Genos, who possessed a beautiful appeal and has carried out various heroic deeds as the significant priority, thereby matching Sweet Mask’s ideology.

Another example of Sweet mask’s obsession with power was when he took out the S-class heroes he felt were not worthy of their positions and chose to reduce their rank while acting as the team commander of the monster Association.

At the same time, Sweet Mask loves those who have embraced the power of evil that he fights against.

Amai’s hatred for monsters, combined with his sense of justice and beauty, is what makes him venomously superior to others while upholding his own act of self-righteousness.

This is evident when he went after Zombieman’s credibility as a person, let alone a hero. Sweet Mask challenged Zombieman’s odd abilities and asked why he could not die in the S-class hero meeting.

Sweet Mask even went as far as to plan how he’ll murder the other heroes since he was no longer tolerant with them after they had potentially judged him and had a descanting view on his way of life.

Regardless of his toxic personality mannerisms, Sweet Mask truly wants to assist people in fighting evil. Some people believe that his reputation and fame clouded his judgement and Sweet Mask often forgets why he wanted to become a hero in the first place.

This is evident by how he respects people for how courageous they are.

Sweet Mask was surprised when he was told that the King had been battling with monsters all night, and he was pleased with the King, complimenting him and fully expressing his admiration.

If you recall, when Amai Mask thought about murdering the S-class so he could hide his failures in the monster association raid, Iaian asked after him to know if he was okay.

This question by Iaian instantly triggered a memory within Sweet Mask which showed a time in the past when the number one hero Blast saved him from a monster.

The flashback deeply affected Sweet Mask as he instantly began to bash his head on the ground to regain his composure and control his murderous urge.

In the end, Sweet Mask smiled and mentioned that he had almost forgotten the most crucial lesson, which was self-control.

As a high ranked A-class hero, Sweet Mask is a powerful and skilled individual that is far superior to all the heroes in his class, and his abilities are enough to move him to S-class.

Sweet Mask claims to be more potent than the Atomic samurai and believes in his abilities to fight against other S-class heroes like Flashy Flask.

Sweet Mask voluntarily chose not to move to S-class to stop the weaklings in A-class from getting promoted.

Even Fabuki describes Sweet Mask as a monster; this is a similar opinion to her sister Tatsumaki, who happens to be the second-highest ranked heroine in the association.

Furthermore, after Fabuki witnessed Saitama’s strength and power in their fight, she became convinced that it would be hard for him to overcome Sweet Mask.

Sweet Mask sees himself as a jack of all trades capable of defeating anybody. He’s confident in declaring himself the perfect hero.

However, he has a slight weakness, and it is extreme ugliness; it paralyzes him by not allowing him to move correctly and fight back, thus becoming very vulnerable against Ugmons.

Asides from his combat capabilities, Amai Mask is a talented singer and actor.

Sweet mask has a fantastic speed which was exposed when he killed a group of alien invaders captured before the closest S-class heroes reacted.

Also, Sweet Mask painlessly evaded Suppon’s bombardment of attacks, got the better of him and struck him down with two blows before the cavemen got wind of what was happening.

Sweet Mask has great brute strength, which was visible for all to see when he forcibly influenced a monster’s movement in a concert without disrupting the show’s flow.

He handled the monster with one hand, quickly tore two other monsters in half, and punched another beast with a heavy force that demolished the monster’s head.

Sweet Mask is known for lifting and throwing pieces of rubble away with just one arm.

Another excellent example of how strong Amai Mask is, was when he killed Do-S, a Demon-level mystic being, by crushing her head with just one of his arms.

Sweet Mask is so strong that he can destroy the tanks that house the Monster cells with just a few swipes.

This is another great asset of our beloved Sweet Mask that makes him a trendy fan favorite of the show, One Punch Man.

No one knows how he does it, but Sweet Mask can recover quickly whenever he’s badly injured in battle.

The first time we experienced this extraordinary regeneration power was when Do-S pierced Sweet Mask’s eye with her vicious tongue and fractured his face in the process.

Sweet Mask suffered an injury to his eye, but Lo and Behold, before we could say Jack, he had healed himself entirely, and we were all surprised.

Sweet Mask is a great combat fighter and a skilled one at that when it comes to combat.

This was evident when he fought with Suppon; his first move was to detect Suppon’s blind spot, get in there, incapacitate him, deliver a deadly strike to bring down Suppon.

Besides his superhuman speed and strength, Amai Mask has great hands as sharp as a blade which he uses in slicing monsters in half.

One other feature of the great Amai Mask is his high level of accuracy, which was visible for all to see when he was fighting with Fuhrer Ugly.

As the monster was jumping all over the walls and ceiling of the hallway, Amai Mask accurately flung a monster head with his hands towards Fuhrer Ugly as he was coming close to him.

In my opinion, Sweet Mask can defeat Saitama, not just Saitama; he can also defeat Anime Garou regardless of his huge power upgrade.