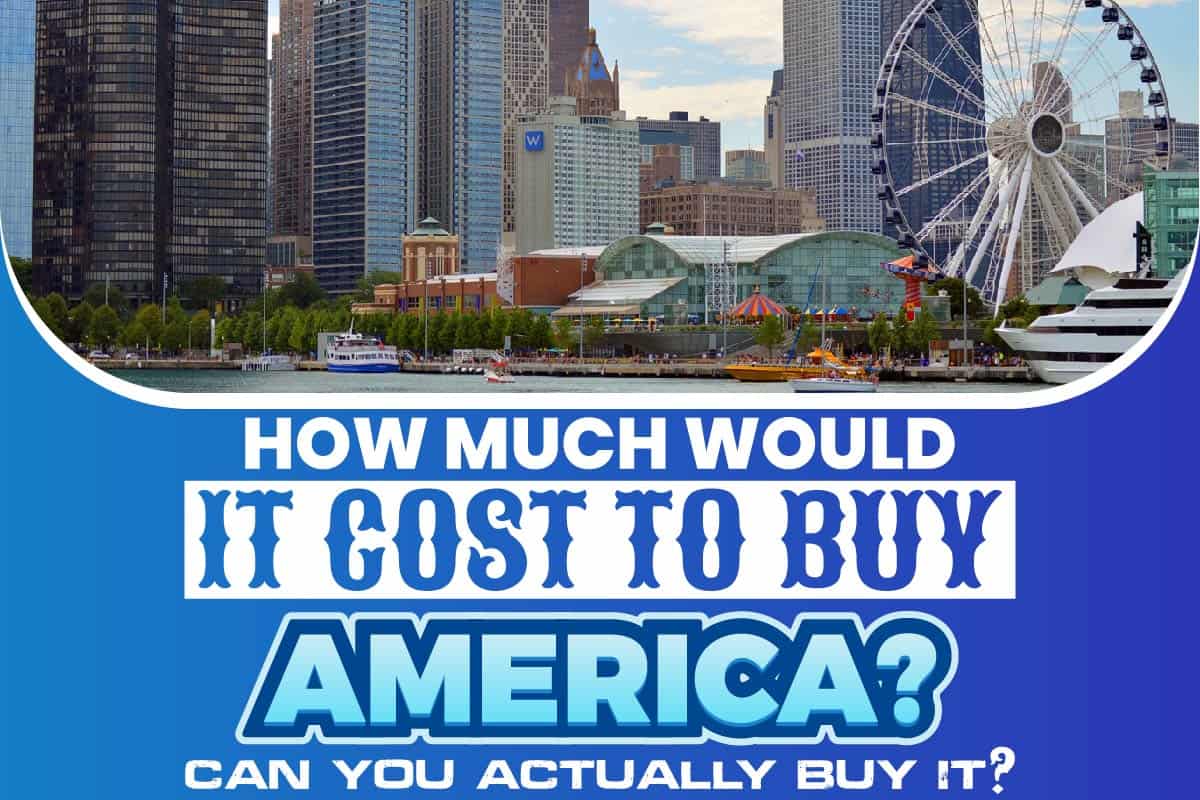 Our minds are such a complex thing. Millions of thoughts pass through it in a matter of seconds. Sometimes, we, the team’s writers, even catch ourselves wondering about getting or owning stuff that would be totally unreasonable to have.

Once, this thought of purchasing entire America passed through one of our team member’s minds. And when he was talking about it in the break time, he actually made all of us think about whether it is possible to purchase America or not.

Even if it was possible, we wondered how much would it cost to buy America. And that is exactly what inspired this article. We dug through the different records and stats to determine the cost and if there was a possibility of someone owning the entire country. And what we have found out will surely amaze you.

One can not simply put a price on a country and put it up for sale. That is why it is not that easy to tell how much it would cost to purchase the whole of America. And it would be idiotic to ask official personnel the price of America. One might even end up in jail for that.

Nonetheless, let us not forget that we live in an age where most of the records are stored online. And most of these records are accessible by the public. So, we got into digging. Eventually, we stumbled upon the Flow of Funds report that Federal Reserve published.

Now, you might be wondering what would the Flow of Funds actually answer? Well, it gives you an estimate of the values of real states. And if you are wealthy enough to own all of the real estate in the country, you basically own about 95% of the county. That being said, the values are as follows:

Do treat these numbers as estimates because this report is yet to be updated as of now. And over time, the value of these real estates might have bumped up significantly. However, if you own that $44.092 trillion, you would be worthy enough of purchasing all of the real estates of America.

How Much Land Does The Federal Government Own?

Real estate properties are not the only thing that is inside the country. There are also the lands and properties that the federal government owns. And if you are planning to purchase the entire America inch by inch, you would also have to keep that estimation in your mind.

Even though the estimates were not present on the Flow of Funds report we stumbled upon, we did manage to find out the amount of land and their estimated values through a different source.

As for now, there are 628.8 million acres of land owned by the federal government. Do note that this number is also estimated. And the price for each acre is going to range from $500 per acre to $300 per acre. It will depend on the location and how important the land is.

Let us consider the maximum number here because you must pay the premium price if you are planning to purchase American. So, the total of the land owned by the federal government would cost around $1.886 trillion. However, this is not all that Federal holds. These are just lands; there are properties as well.

According to our research, the federal properties total about 3.35 billion square feet. Again, this number is an estimate, and it would be impossible to tell you the exact number. However, as the federal government owns properties basically everywhere, let us consider the average commercial value per foot.

That would be $24 per square foot. And upon doing the maths, you will end up with a total of $1.966 trillion. So, the total cost to purchase all the government-owned land and properties is $3.832 trillion.

What Is The Total Estimated Value Of America?

Up until now, we have estimated the total value of the real estate that is in America and the estimated value of the lands and properties owned by the federal government. It is time to give you a total estimated value. And that would be $46.058 trillion. Let us make this even and consider the value as $46 trillion.

Can Anyone Purchase America If That Person Can Afford It?

From the segments we have covered above, the estimated cost of America is out. It is in the neighborhood of $46 trillion. That totals the real estate, all the properties, and land that the federal government owns.

Now, if you do not own a money machine or have thousands of acres of garden with trees that grow money, it would certainly be impossible to have that amount of money. If you are not yet getting the full picture, allow us to give you an idea by bringing the global economy into the scenario.

The whole world, as in the global economy, has a value of somewhere around $106 trillion. And if you take that number and deduct the cost of America, you would end up in the ballpark of $60 trillion. It will certainly be impossible to get that much amount money!

Not really. Even if there is a thinking that anyone can purchase anything with enough money, that person will certainly not be able to buy America or any other country. You have to understand that no one purchases any country to become the governor of that country.

There is a certain way the world works in terms of borders and countries. Most of the countries fought for their land, while many got a hold of their territory by peacefully ending disputes. Nonetheless, it is certainly not possible to purchase an entire country, at least not now.

Has Anyone Ever Bought A Country In The Past?

Even though we did conclude that it is not possible to purchase a country in this modern age we live in, there are records of persons purchasing an entire country in the past.

Upon further investigation, we found there is a record of a country being bought once and sold twice. Richard the Lionheart is the guy. In 1192, he conquered Cyprus from Isaac. But upon conquering the land, he felt no need for it as conquering it was just for proving power over Isaac.

However, he had more battles to fight, which was the Third Crusade. And he simply did not have enough troops, and he neither had the money to pay more soldiers. That is when he decided to sell Cyprus. He found a suitable buyer, which was the Templars.

The templars provided the fund Lionheart required, and he handed over the country to them. After that, he got enough soldiers to fight the war and left Cyprus away from his interests. However, the Templars really did not need the country either. It became a hassle for them as they would have to govern that region too.

So, in 1196, they came to the solution to this problem. Guy de Lusignan lost almost all of his realm after that Battel of Hattin. Even though he partially redeemed a part of Jerusalem, he still claimed to be the king. However, no one really wanted Guy in that position. And he was not letting go that easily either.

He wanted to claim any part of the land that he could rule over. For that reason, the other Crusaders told him to step aside and buy Cyprus. Considering that the land indeed needed some government, he bought it from the Templars.

Like this, a land that was conquered got sold twice. However, this was only possible because of the time period. At that time, conquering lands was nothing new. And Kings would even pay a fortune to claim the ruling rights over land. So, many countries got handed over to new buyers.

All things aside, if you are still wondering how much would it cost to buy America, it is about $46.058 trillion. However, it would be completely impossible for someone to get a hold of that much amount of money.

And even if someone can afford to pay that much amount of money, no legal laws would allow that person to purchase America. It is a sovereign state and is not up for sale.