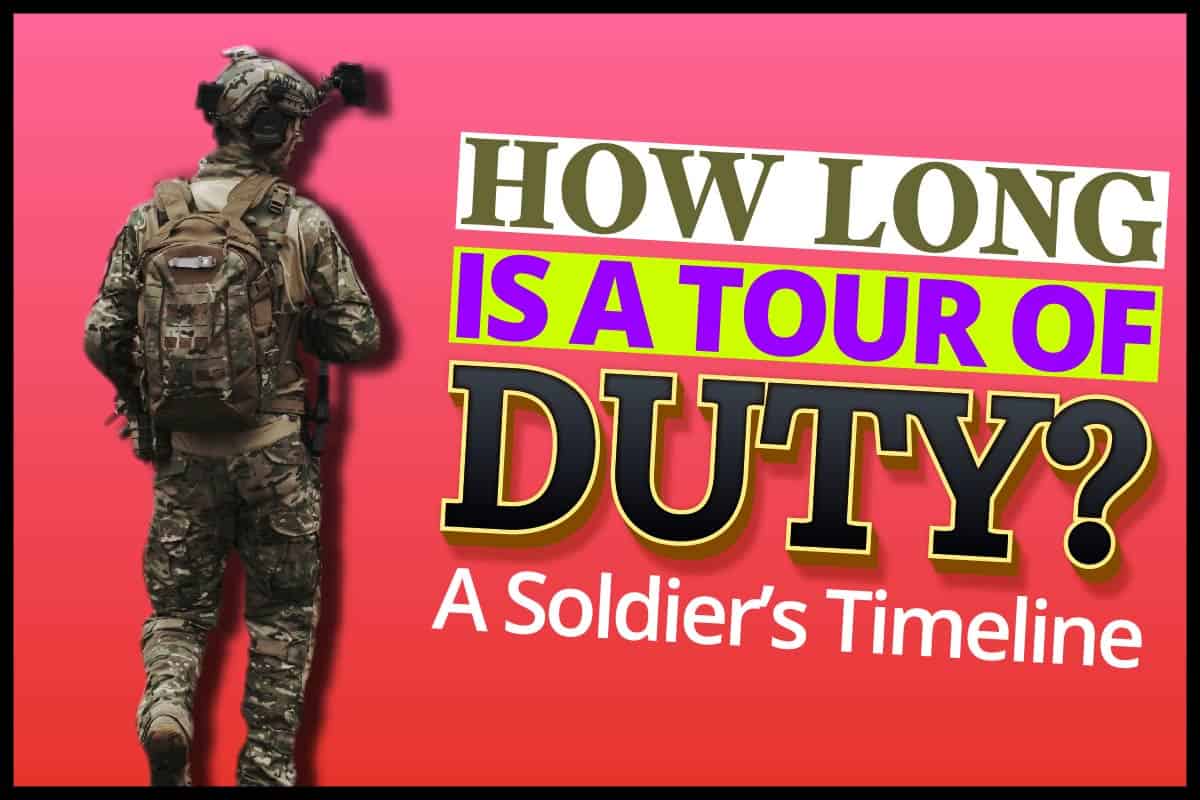 The American Military is arguable the most powerful Military on the planet, and inevitably its power has been stretched all over the earth.

A tour of duty refers to a period a soldier spends in enemy territory or active combat.

Soldiers are forced to leave their families and go on tours in several war-torn regions to eliminate national security threats or peace-keeping missions.

So let us get down to the details and see just how much time an American soldier can go on tour.

How Long Is A Tour Of Duty?

American soldiers have tours that take between 6 months and 15 months, depending on the reason of deployment, location, and unit.

Different military sections have different ways of timing this period; thus, the exact time will depend on the specific directive given to the soldier’s company.

Details On Tour Of Duty Timelines

The military needs to ensure that their soldiers are in the right state of mind for them to be well-coordinated and safer out in battle.

This means the soldiers should not get too exhausted, and the best way to do this is to get them out of action after some time.

The specific time it takes for a new batch of soldiers to get deployed differs from one military branch to another. Here is a detailed timeline for all active-duty American soldiers;

The Army has a tour of duty that could take between 12 and 15 months. However, if a soldier has a family and the family accompanies them on tour, the military can extend it to 36 months. For a soldier without a family, the tour lasts a standard 12 months.

Soldiers with families on tour spend more time on the field to save on the amount of money used to transport the families to and from US soil. Single soldiers get a tour duty of 36 months, but it may differ or get cut short for several reasons.

The American tour of duty for pilots is four years. However, the length of the tour will differ depending on the role played by the pilot in the field.

There has been a shorter tour requirement for instructors with prefixes T, X, and J in recent years.

The Military made this move to increase personnel readiness and resilience in battle. These pilots take part in combat missions, surveillance, and provision of air support to the Navy and Army. Engineers and support personnel spend slightly longer times on tours than pilots.

Marine Corps take tours of between 6 and 12 months, considering the type of mission. There are several types of tours a Marine can go to, including;

For a Navy, the tour of duty refers to time spent over water in overseas deployments, including patrol duties, active combat, and foreign assignment to ally countries.

A tour means that a ship will go out to Sea with a crew for six months, come back to shore for maintenance before going back out.

This routine will give a tour a frame of about a year, but some will get extended to two years or more.

There is a push to get the sailors out in the Sea for up to 4 years to produce a stronger, more stable force. In addition, shore duty has been reduced from the initial 24 months due to the shortage of staff at Sea.

Factors Affecting The Timing Of A Tour Of Duty

Several factors are used to determine how long a soldier will spend on tour. These periods often vary because the soldiers experience different levels of pressure in their respective guilds. Here are some common factors that are looked at;

The branch of the military in which they serve

Different branches of the Military spend different amounts of time on the field. This is affected by the number of supplies available, the pressure in the area, and the need for numbers.

For example, the Navy tends to spend more time out in the seas than other military branches.

This is because most of their missions are patrol, and they rarely go into active combat, and there is a shortage of sailors.

The Air force and Army, on the other hand, have much shorter tours of duty because of the more stressful nature of being a fighter pilot or in constant active combat.

The reason for their deployment

The Military sends American soldiers to foreign soil for many different reasons. These reasons will affect the length of a tour as much as the location. The soldiers that are sent to war-torn areas have shorter periods in the field.

This is because the tremendous amount of pressure experienced by the soldier in active combat can break them if they stay out for too long.

Those sent to ally nations like Japan or Spain for training exercises generally stay out for more extended periods before coming home.

Peace-keeping missions by the American Government or the UN working with combined forces will also differ depending on the situation of the area involved and the needs of the Government. For example, a rougher area would need more military presence; thus, tours might be longer.

Their role on the field

A soldier’s role on tour will determine the amount of stress and pressure they are under. For example, support personnel that works with the machinery and vehicles tend to stay on tours for longer times since they are not engaged in combat.

Engineers, medical staff, and some high-ranking officers will stay on tour for lengths of up to 3 groups before they get a break.

If you have a family on tour with you and the Government supports them, it will reduce the length of your tour to cut down on the cost.

Being away from home can become pretty stressful for any person despite the amount of training they have been through.

Sending deployed soldiers a care package is an excellent way to keep them refreshed and calm as they serve their nation.

Here is a list of some thoughtful objects you could add to the care package;

Considering that soldiers spend months out in the field, it makes sense to get a care package that makes them stay a bit more comfortable.

You could send items like socks of high quality, toothbrushes and toothpaste, lip balm, baby wipes, sunscreen, hand sanitizer, sewing kits, and soap. These will make for a cleaner, healthier soldier that will perform better in combat.

Soldiers in the field tend to have a lot of free time. You could add something in your care package to help them pass the time as they wait for new orders.

To help pass time, you could get them reading materials, board games, a deck of cards, puzzles, handheld video games, baseball gloves, baseball, pencils, and an iPod. The simplest objects could help pass time and relieve stress.

There is enough food to feed the soldiers in the camp, but it may lack in taste and variety. Spicing up a soldier’s menu boosts morale. Hot sauce, beef jerky, protein bars, Slim Jims, and even gum, among others, will help.

When sending food, ensure you send something non-perishable since they take a lot of time in transit.

Also, a boost of morale from home will help a soldier go through the tough days.  What better to get him up than a sentimental object or handwritten letter from home?

Ensure soldiers are involved with their families since that is what they are fighting for. Generally, ensure there is a little bit of everything in your care package. For example, you could get baby pictures or videos of significant milestones for the family.

The American military offers excellent service to the security of the Americans and many other nations of the world.

Unfortunately, the men and women who go out for the tours of duty must take a break to be with their families and friends to rest their bodies and minds.

A tour of duty takes 6 – 15 months, and it may be cut short or increased depending on the needs of the Government or soldier’s health.

In addition, different branches of the military have different timelines of operation; thus, the time may vary.