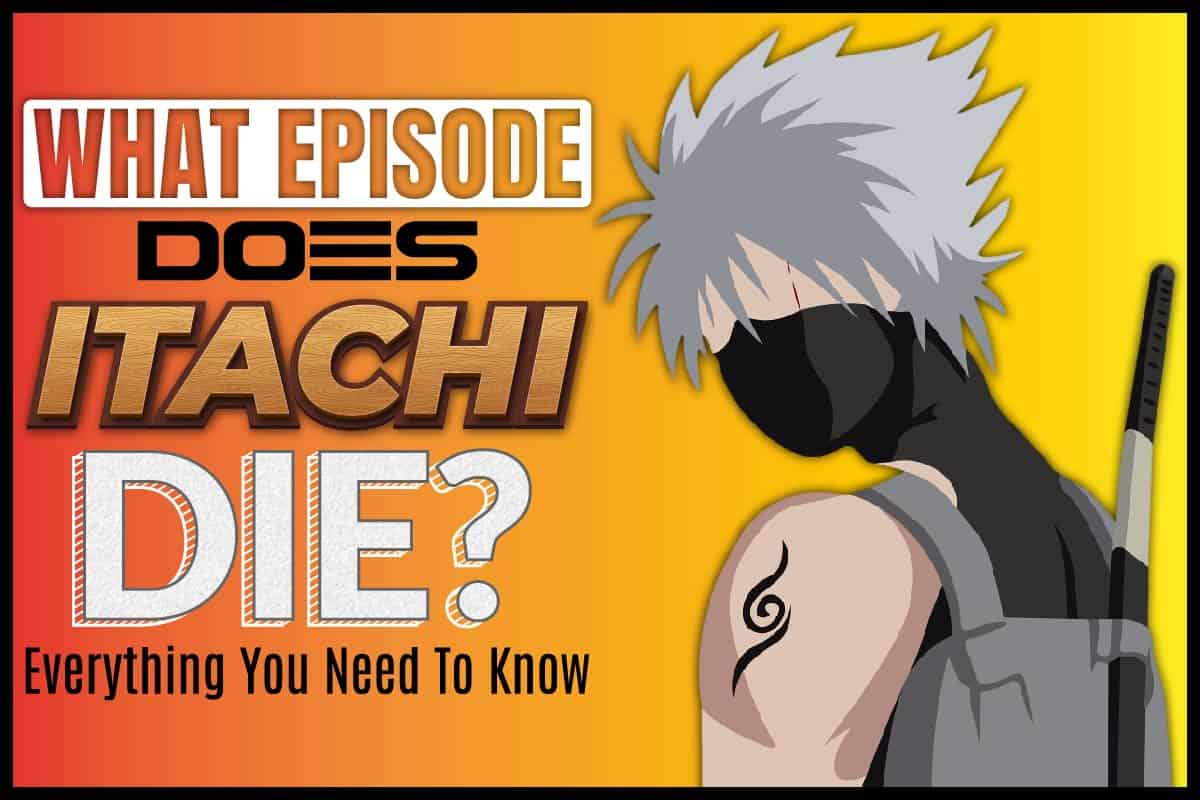 Itachi Uchiha is one of the top characters in Naruto that we all love to hate because of his role in the anime series. He left his mark in the hearts of many fans of Naruto, who felt he was a betrayal.

Though, when news about the circumstances surrounding Itachi’s death came out, many people’s perception of Itachi changed dramatically.

However, with Itachi dying twice, many fans are beginning to get confused about when and how Itachi died.

Although, there are many more twists to unravel on how and when Itachi died. Keep reading to find out.

In What Episode Did Itachi First Die?

The first recorded death of Itachi Uchiha took place in episode 138, titled the end. Itachi fought with Sasuke in episode 138, and during the fight, he used some of his energy to become free from Orochimaru.

As the thunderous clouds gather up above, Zetsu discovers that they were formed by Sasuke’s fire release, the great dragon fire technique, combined with Itachi’s explosive Amaterasu.

In a bid to kill Itachi, Sasuke used his newly found Jutsu, Kirin to harness the power of lightning up above the sky, using nothing but his chakra to destroy the Uchiha hideouts.

Itachi gets up after surviving Kirin’s hit, all thanks to his Susanoo, a giant chakra shield available to only those who have Mangeky Sharingan in their eyes.

At this point, Sasuke believes he has won the battle.

Furthermore, as Itachi gets closer to Sasuke, who no longer has any chakra left, the bottled-up piece of Orochimaru that Sasuke absorbed began to control his body.

The eight white Orochimaru snakes rushed out of Sasuke’s cursed seal through the Eight Branches technique, and Orochimaru also came out through one of the snake’s mouths.

Orochimaru thanked Itachi for reducing Sasuke’s chakra to allow him break free, and he remained forever grateful that he had the opportunity to control Sasuke’s body.

As the fight continues, Itachi beheads seven of the snakes with his mighty Susanoo sword of Totsuka.

The sword is widely feared because it can seal souls and keep them forever, and that was what Itachi did to Orochimaru as he freed Sasuke from the cursed seal.

Meanwhile, the whole action takes up too much chakra as it reduced Itachi’s Susanoo to a point where it was no longer potent.

Itachi in pain, walks slowly as he approaches Sasuke while coughing up blood, says his final words to Sasuke, moves his head forward before dropping off to the ground dead.

On seeing Itachi die, Sasuke reflects over Itachi’s last words, stares at his brother’s corpse, and collapses next to him in an exhausted manner.

One common misconception of Itachi’s journey to the land of the dead is that Sasuke killed him. However, there’s no iota of truth in that school of thought.

The two brothers, Itachi and Sasuke, fought quite alright, and Sasuke wanted to kill Itachi by all means for what he did to their parents and their clan, but he never had the chance to do it.

One fact that many people fail to recognize is that Itachi was sick when he was fighting Sasuke. He was taking his medication to stay alive, and Sasuke wasn’t aware of his illness.

Itachi knew that Sasuke would defeat him if they fought, so he ensured that their battle would serve as a Mangekyo Sharingan exercise for Sasuke.

What Illness Was Itachi Suffering From?

Itachi was suffering from Microscopic polyangiitis (MPA), a rare auto immune illness that pushes the antibodies to fight the blood cells in the body. It makes them bleed as they become inflamed and damaged.

Furthermore, MPA attacks the vital body parts causing coughing, bleeding, and fatigue. These were the same symptoms that Itachi was exhibiting all through the series.

Which Episode Did Itachi Die The Second Time?

Itachi came back from the dead in episode 339 and later died in the same episode a second time. He died after he managed to set himself free of the recreation Jutsu.

How Old Was Itachi When He Died

Itachi was 21 years old when he fought his brother Sasuke and died. To further elaborate his lifespan, at eleven years old, Itachi had become an Anbu.

Six months later, Shisui died. At age twelve, Itachi became the captain of Anbu. Itachi was thirteen years old when he killed his clan and his parents.

How Did Itachi Kill His Lover?

You can’t talk about the Naruto series without mentioning Itachi Uchiha, who many people hate because he killed his clan, lover, and parents.

He made an enemy of his brother after he killed their parents, and Sasuke vowed to avenge the death of their parents.

On the other hand, fans are divided on how they perceive Itachi. Some believe that he shouldn’t have betrayed his clan, while others feel he had no choice but to defend Konoha against her enemies.

Itachi didn’t kill his clan out of anger; it was because he wanted to protect his home and his brother Sasuke.

Another reason why many people hate Itachi is the circumstances surrounding the death of his lover Izumi Uchiha. Izumi could have become Itachi’s wife had he not killed her.

Itachi killed Izumi first on the night he slaughtered the entire Uchiha clan, and before she died, she thanked him for loving her. In response, Itachi also responded by thanking Izumi for the love they shared before she gave up the ghost.

Itachi’s love story began during the Nine tails attack, and the attack claimed the life of Izumi’s father. The death of her father hit Izumi so hard that she awakened her Sharingan.

Itachi and Izumi met during the Nine tails attack when Itachi protected Sasuke and Izumi from harm’s way.

Furthermore, Itachi and Izumi got into the academy together. However, Izumi graduated a year before others.

After Itachi was forced to choose between his village and his clan, he decides to restore peace in the village. His agreement only allowed him to spare Sasuke’s life, which means he had no other choice but to kill his parents and Izumi.

To make things a bit easier, Itachi decided to kill Izumi first. Itachi visits Izumi, separates her from her mother, and places a powerful Tsukuyomi on Izumi.

According to history, the Tsukuyomi that Itachi used on Izumi is the most potent genjutsu ever used. The Tsukuyomi showed Izumi and Itachi living 70 years of a happy life.

It is important to note that for every 30 years in the genjutsu, one second passes in the real world.

The Tsukuyomi was perfectly made that Itachi lived a very peaceful life and attained the Jinin rank. The village was peaceful without any crises between Konoha and Uchiha.

Furthermore, Itachi proposes to Izumi by giving her a promise ring as she retires from her shinobi way of life. As time goes by, Izumi and Itachi breed kids and grow old together.

As they continue to grow old together, Izumi becomes ill. Itachi takes care of her while she recovers. Itachi’s love story ends as Izumi dies in the Tsukuyomi.

After Izumi dies, Itachi holds her in his arms, thanks her for loving him wholeheartedly. Izumi dies a peaceful death as she was privileged to experience the life she longed for.

Itachi loved Izumi with all his heart; it is unfortunate that he could not spare her life the same way he did Sasuke.

Who Is The Strongest Uchiha?

Without any doubt, Sasuke is the strongest Uchiha that ever lived. He became stronger after he collected the Mangekyo Sharingan from Itachi shortly after his death.

Itachi’s eyes gave him the power of flame control and Amaterasu. Furthermore, Sasuke gained the ability to use the full-body Susanoo, which made him very powerful.

In the history of Naruto, Sasuke Uchiha happens to be the strongest Uchiha that ever lived. This makes him stronger than Madara.

During the fourth Ninja war, Sasuke fought with Madara Uchiha and defeated him to assert his dominance. As time went by, Sasuke grew in strength and became equal to Naruto in terms of combat.

Sasuke fought strong contenders like Momoshiki Otsutsuki and defeated them to prove that he was the strongest. Although, many fans of the Naruto series believe that Madara is the strongest Uchiha that ever lived.

However, that’s not true. Sasuke Uchiha is stronger than Madara, and it has been proven.

After the truth about Itachi came out, Sasuke loved his brother to the extent that he wanted to wage war on Konoha because he felt Konoha used Itachi.

Kabuto even made it clear that Itachi wanted Sasuke to be safe even after his death.

The love and hate relationship between Itachi and his brother Sasuke is epic as it makes many fans of the Naruto series fall in love with the show.

Why Did Kakashi Kill Rin? Here’s All You Need To Know

Kenworth Vs. Freightliner: See What Differentiates Both Trucks

1 thought on “What Episode Does Itachi Die? Everything You Need To Know”