Hippo Vs. Elephant – Who Would Win? 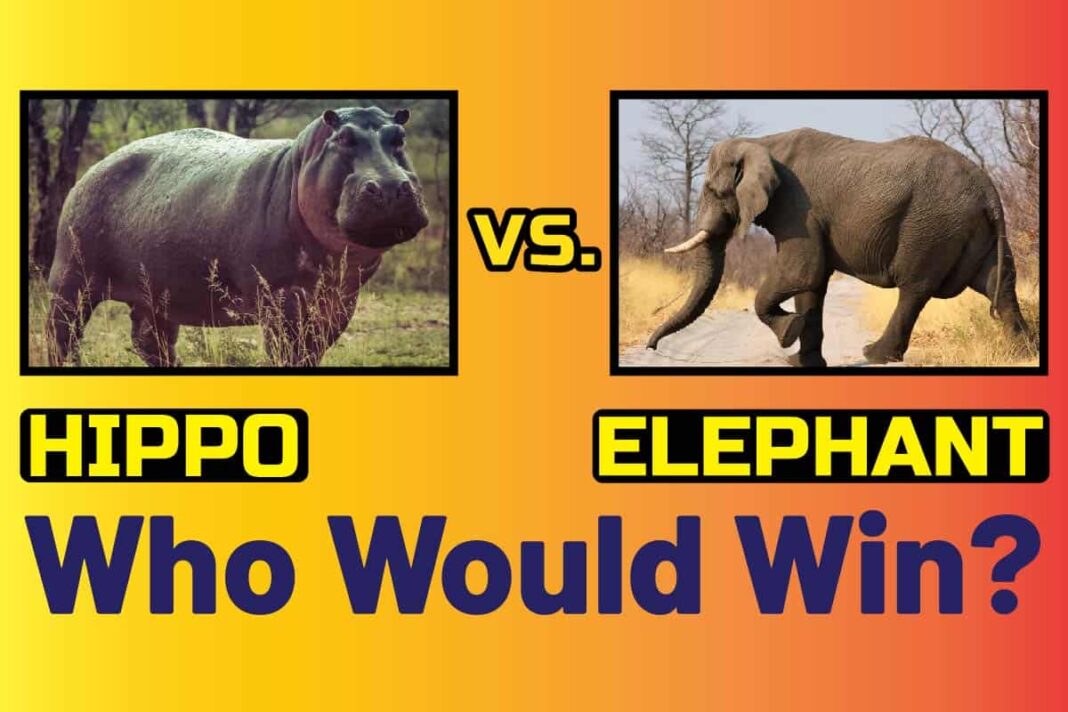 Hippos are one of those animals that live on top of the food chain. They’re powerful, more aggressive than elephants, and have a more predatory nature than elephants do.

But in a battle of hippo vs. elephant, who would win? The answer is the elephant. But why? That’s what we’re going to talk about in this article.

To understand why the elephant is the possible winner in a battle of hippo vs. elephant, we need to talk about their strengths and skills.

Below are some comparative points to look at with regards to strength differences between these two animals.

An adult elephant can weigh anything between two to seven tons if it’s a male. A female can’t grow very large and is usually between three to four tons of weight.

On the other hand, an adult male hippo can weigh two tons at the highest. Female hippos are around one to one and a half tons.

An adult elephant can have around thirteen feet of height, whereas a hippo would go a little more than five feet in height.

These weight and height differences alone are enough to partially understand why an elephant is a clear winner in the battle.

An adult hippo weighs a fraction of its elephant counterpart. The staggering weight and height are enough to floor and tread a hippo within seconds after starting a battle. So, in terms of weight, the hippo is a clear loser.

Suppose an elephant weighs about four tons or four thousand kilograms. It carries all its weight on its four legs. So, each leg carries a thousand kilograms of weight, which is basically enough to break a few of a hippo’s skeletal bones.

An elephant, if somehow, gets to push one or two of its legs on a hippo, then it won’t take much for it to break some bones of that hippo.

No animal’s legs can hold the same amount of pressure per square inch (psi) as an elephant does. No living land animals are close to the size of an elephant.

The feet of a hippo are strong and heavy, but they’re nowhere near an elephant’s. The comparison of the feet pressure of two animals is worthless here.

It isn’t that hippos aren’t intelligent, but they’re nowhere as bright as elephants. Elephants have long trunks that they use to suck water up to their mouths to drink. But this is just one thing that their trunks are used for.

Those trunks are highly sensitive and have thousands of nerves. Those nerves help in controlling the trunks with high precision and allow swift movements.

It has been noticed many times that the elephants used their trunks to pick up objects to move or to build something.

And since they’re pretty smart, they can use their trunks to pick up objects as weapons while in battle.

The trunk of an elephant may seem like a simple thing, but it’s pretty complicated. It has complex nerve endings that make it one of the most distinct muscle groups of its body.

So, chances are there that an elephant might use random objects around it as weapons against a hippo.

An elephant can easily beat a hippo without even using much of its brain because it already is a winner in size and weight. But if it decides to use its brains, even a little bit, then the hippo won’t stand a chance at all.

Now you know the answer for hippo vs elephant, and which one to pick. As a matter of fact, elephants, while being the strongest land animal, are very docile in nature.

They actually make one of the passionate companions and good pets. But, for most people, it’s practically impossible to keep them as pets.

Hippos don’t actually make good pets as they’re very aggressive in nature. However, in terms of fighting skills, aggression isn’t an alternative for physical strength. So, a hippo can’t stand a chance against an elephant in anyways.