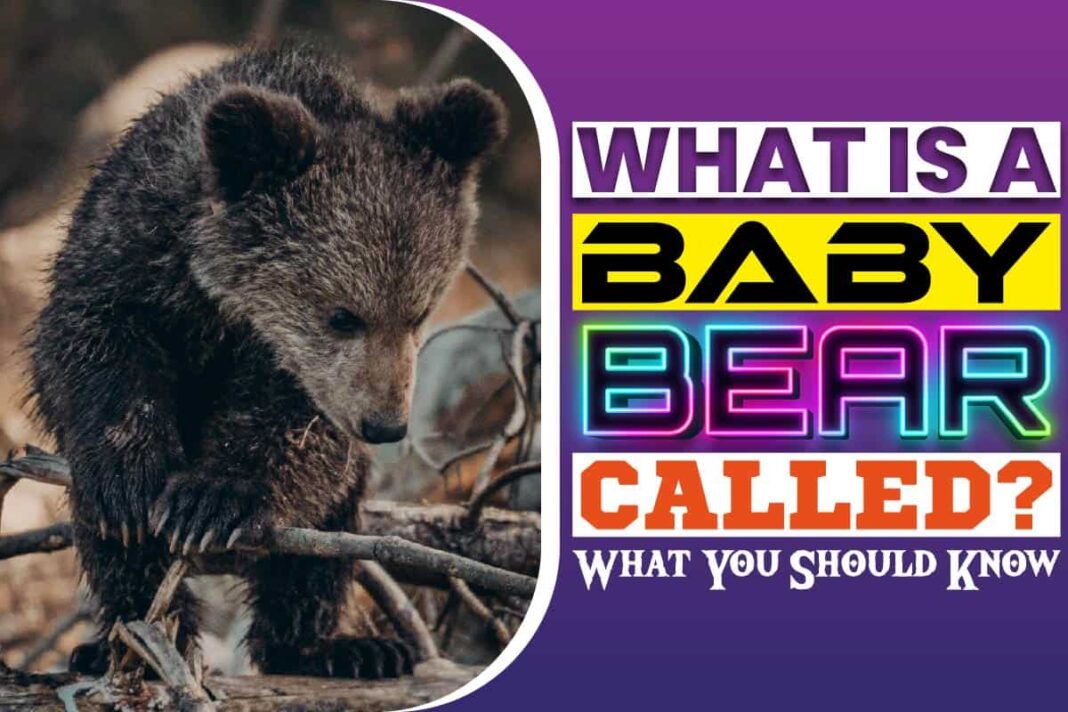 These animals can live for a long time in the wild and even longer when captured and looked after by humans. Reproduction is also an essential part of their continuity. And baby bears are just as fascinating as the adult ones.

Alright, let’s find an answer to this question.

What is a baby bear called?

A baby bear is called a cub. This name is for babies from any of the eight species of bears. These include the Sun bears, Brown bears, Polar bears, Andean bears, Asiatic black bears, North American black bears, Sloth bears, and Giant pandas.

Keep reading to know more about this topic.

The Birth Of A Baby Bear

For the female bear, the most critical preparation for the arrival of the cub is getting fat. After they go through the mating process between May and June, they spend much of their time eating. The rest of the summer is dedicated to eating and fattening.

Fattening is crucial. Female bears (Sow) who don’t get enough fat may lose their pregnancies. So, by fall, females that weigh enough would give birth to their cubs in a prepared den, while those without enough weight wouldn’t give birth.

Pregnant Sows prepare their dens early, making them comfortable for the incoming babies. They also begin hibernating between September and October and welcome their Cubs in January.

The birth is always after a gestation period of about seven months. Even though copulation happened in June, the fetus develops a few months to the end of the pregnancy. But this happens only when the fertilized egg is implanted in the uterus two months before delivery (November). Bears usually have delayed implantation.

Of course, the fetus would only survive if the mother bear has gathered enough fat for the baby to survive. The accumulated fat would see her through winter when she has to breastfeed her Cubs before she resumes feeding herself in spring.

When the cubs are delivered, they don’t weigh much, and their mother offers them protection. She licks her babies and warms them up after they are born.

The mother bear’s life revolves around her Cubs, and her entire body is attuned to their needs. The female loses a good amount of weight gained during the nursing process.

After birth, the mother’s temperature reduces by 2°F during summer, and so does her body metabolism. However, her body temperature is still enough for her to function. She is still aware of her children’s needs, especially when they cry and respond to them.

The needs of the cub include food, shelter from cold, and passing out waste. Whatever it might be, the mother bear takes care of it.

When the need to pass out waste comes, she runs her tongue over the cub to induce excretion. When they finally pass out the waste, the mother bear eats it to keep the den clean and habitable. And so that she can regain the nutrient that has been lost through the feces.

When they need to stay warm, she provides warmth by breathing on their tiny bodies as she towers over them. To solve their feeding needs, the female bear guides the cubs to her breast to get what they need.

Breast Milk is their only source of nutrients, and they latch onto their mother’s breast for long periods.

When Are The Baby Bears Old Enough To Leave The Den?

The cubs are already four to six weeks old by the end of February, and at this time, they should be weighing two to three pounds.

They can do a few things at this point but not enough; they still cry to get their mother’s attention. Their temperature is coming up but isn’t there yet. They can crawl but not walk, and they can see but not entirely.

The mother, at this point, is losing weight to nurse the cub to maximum health. March comes with even more growth, their body temperature is on the rise, and they can walk, at least within the den. Their mother still has to lick them dry as the snow melts in the den.

In April, the baby bear would have gained more weight (3-9 pounds). How much weight they manage to gain is dependent on two factors. The first, which is the most important, is their mothers’ weight. And the second is how many litters had to partake from the mother’s breast milk.

By April, the cubs can say goodbye to the denning period or should be close to saying goodbye.

What Is The Baby Bear’s First Experience Outside The Den Like?

When the cubs finally leave the den, they still stay close to their mothers. The cubs that have developed well can start climbing trees as they come out of the den. However, they are not as fast as older bears. So, they can’t run faster than a wolf.

These cubs still need their mother’s protection, and she delivers without hesitating. She defends them and keeps them warm, and feeds them outside the den.

The mother is never far away. When the cub cries, she comes immediately. She would sometimes carry them in her mouth or help them from trees.

So, when the cub comes out of the den, the mother would still be all over them, keeping them safe because the wild is a dangerous place for a baby.

What Do Baby Bears Eat When They Come Out Of The Den?

The bear cubs don’t eat solid food until they develop teeth, which won’t happen until spring. So, they continue to suck their mothers’ breasts until fall. By fall, they can hibernate, contributing to the making of the den with the mother bear doing the construction.

However, when they first come out of the den, they taste whatever their mother eats, even though they can’t chew.

When Does The Baby Bear Leave Its Mother?

The baby bears stay with their mother till they are about 17 months old. At this point, the female bear is ready to mate again, and she no longer has any patience for the babies that she dedicated a lot to keep healthy.

She chases them away from her side, many times. If they remain in her territory, and she lets them, it would be without having any form of contact with them. Female cubs stay in their mother’s territories for a long time until they mature fully.

The male cubs don’t waste any time. They leave without their mothers chasing them away. These males travel quite the distance, settle down and get started with mating.

Yes, they do. Just like adult bears, baby bears use sounds and sometimes body language to express how they feel at a particular moment.

Cubs make sounds like a vibrating hum when they are sucking on their mother’s breast or comfortable. They also squeal when they are in an uncomfortable position, fearful, or distressed.

Yes, they do. Only a handful of animals that play more than the baby bear. They play for long periods and give it their all when they do. Some cubs play why others don’t, but a good number of them do. It’s a matter of different cubs, with different interests in play. In truth, well-fed cubs are more likely to play.

During play, cubs don’t vocalize. That is how to tell the difference between their play and fight. Since the two acts look the same when watching as an outsider. They play as they fight. The only difference is that they don’t vocalize, and the bites are gentle.

As the cubs get older and leave their mother’s care, they play less. Many siblings who played together as babies may never get the opportunity to play with each other after their mother chases them out of her care.

Only three things would make an adult bear play after childhood. They include courtship, excess food, and their cubs.

Baby bears are called cubs, and they are as interesting as adult bears. The cubs only survive because their mother gives her all for their survival. It is probably safe to say that there would be no cub survival without the mother bear’s tremendous effort.

This post is an overview of the baby bear’s life, after birth, in and out of the den.

How Do You Take Kratom?

Why Love Disappears and How to Solve Problems In Relationships

The Best Motivational Tips For Kids Learning the Piano