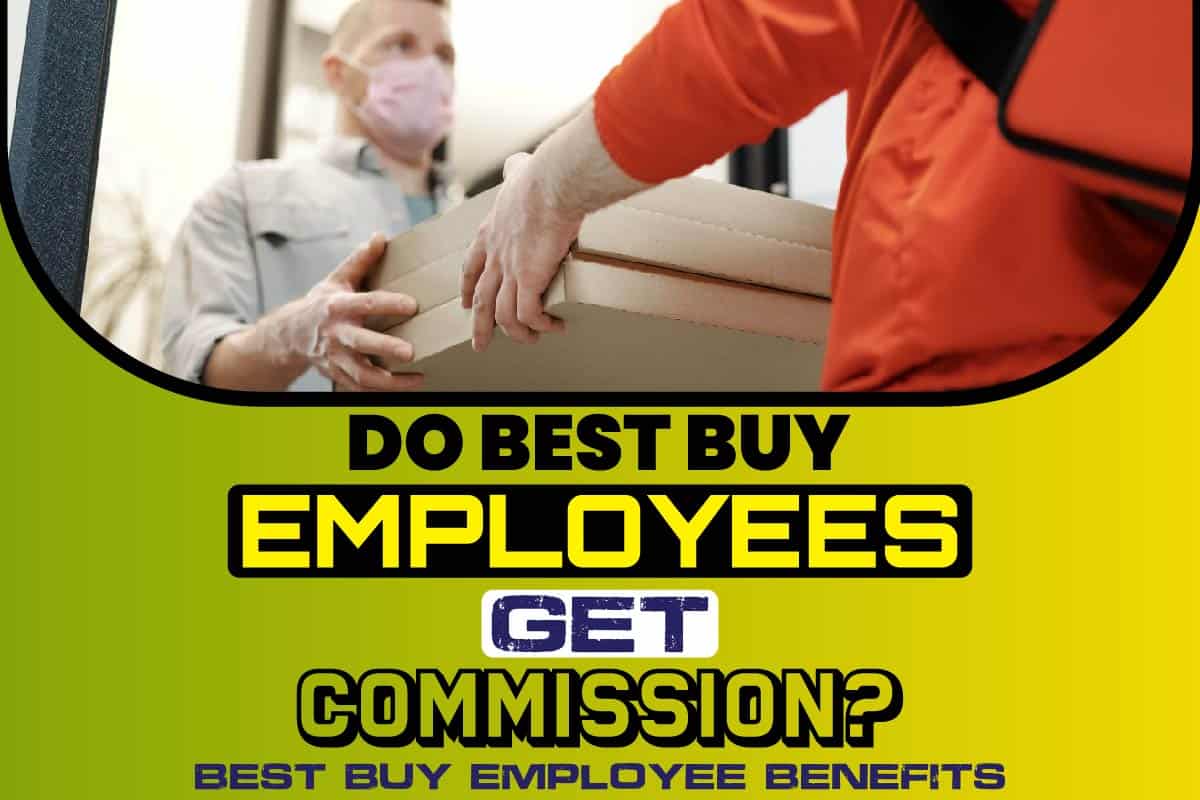 Best Buy is a well-known company in the United States, and it has built a name for itself since surviving the “Amazon crisis” This is a company with a great history that has led to a big success, and it is worth looking into.

A big part of this success is the employees and support staff. This has made many aspiring employees wonder if there are commissions given to the employees at Best Buy. Let us look deeper into the company to get the facts;

Do Best Buy Employees Get Commission?

Company employees do not get a commission. This is one of Best Buy’s proud aspects, and most employees that face customers are not paid on commission.

Best Buy has other ways to incentivize sales and create an atmosphere similar to that created by commissions. The incentive is tied to how well a store performs and not the individual staff performance.

Benefits Of Working At Best Buy

You could be considering working at Best Buy, and you want to know if it is a good choice. Many good things come with being a Best Buy employee, and you should know about them before you pass the opportunity.

1. The company takes a keen interest in your mental and physical well-being

Best Buy recognizes that their employees are their greatest asset since most of their customers are attracted by the excellent service.

Therefore, the company will go out of its way to take care of your health, both physical and mental.

There is medical coverage for behavioral health and prescription drugs. There is also critical illness insurance, vision, accident, and dental insurance.

There is paid leave and maternity support for the ladies, wellness programs, mental health counseling, and employee assistance programs.

2. Your financial well-being is looked out for

Best Buy is one company that ensures you live well today while preparing for a brighter future. All employees older than 18 get a chance to contribute to the 401(k) retirement plan.

This is coupled with competitive pay to leave you with enough money even after paying for the retirement plan.

You will get some incentive payments depending on the store’s performance. Another benefit is the employee discount on purchases in their stores.

There are savings builder programs, life insurance, employee stock purchase plans, dependent care spending accounts, and disability insurance for your future. All these are geared at making your financial future more secure.

3. Your Social life matters to the company

This is a company that will allow you to balance work with your life. You will get your income in times of need even if you don’t make it to work, provided you have a valid reason.

You can get paid time off, bereavement leaves, tuition assistance and discounts, adoption assistance, legal services, pet insurance, commuter benefits, and career development opportunities all in one place.

The hours will also allow you a chance to be with your friends and family, so you don’t miss out on any critical events.

Best Buy made some changes to its logo recently. The text has changed from black to white, with the yellow price tag still present but smaller.

The old logo was iconic, and it has been used since the late 80s, but like everything else, Best Buy has experienced developmental changes.

Best Buy had a humble beginning with only one store in St. Claude, Minnesota, with around eight employees.

It was founded by Richard Schulze in 1966, who took out a second mortgage on his house to raise the capital to start it.

The store specialized in stereos, and it was called Sound of music. Sales reached $1073 in the first year of business, and they kept growing from there. Over the next 15 years, it expanded to a handful of stores around Minnesota.

In 1982, they decided to expand their market from audio equipment and speakers to appliances and other electronics like VCRs.

This decision would lead the company to a whole new level making sales of up to 9.3 million dollars.

In 1983, the company name was changed to Best Buy, and superstores were introduced in 1984. This project was a big success at this point, and in almost three years, the company became the giant we know today.

Their sales grew to an astounding $239 million from the initial $9.3 million in five years. The company kept growing and making more sales over the years.

By 1992, the registered sales of up to $929 million became $1.6 billion the following year. At this point, the most significant competitor to Best Buy was Circuit City.

In 2009 Circuit City was bankrupt, and it closed all its stores. The problem was that new companies were affecting the industry, such as Amazon and other online retailers.

RadioShack and Circuit City did not make it through this time. In 2012 and 2013, it looked like Best Buy would also collapse under the strain of online vendors. The company’s stock price plummeted, and it seemed like this was the end.

Amazon and the internet changed the market and brought about the failure of RadioShack and Circuit City, but Best Buy reacted to the change and adapted.

They made some changes that allowed them to survive and thrive in their new conditions.

Best Buy’s stock price is currently hitting an all-time high. They have positive store sales, their earnings reports and balance sheets are looking good.  They managed to survive Amazon, and this is how they did it;

In general, Best Buy is smaller today than it was seven years ago. They have fewer stores in the US, and their stores are smaller in size.

Where they reduced was on an international level. Are you familiar with Carphone Warehouse in the U.K?

Best Buy used to own half of it, but they sold it, and they did the same with Phone House throughout Europe.

The company either sold Future Shops in Canada or converted them to Best Buy, making for a smaller presence.

In China, they used to own the majority stake in Five Star, but they sold it. Mexico is the only place that they increased their stores by almost double by 2018.

The company increased its emphasis on the North American market while reducing its size. Another thing that helped Best Buy is finding a way to separate itself from Amazon.

Five years ago, they had a big problem when it came to showrooming. Customers would go to stores to look at products but buy them Online.

This means that Best Buy is covering expenses for customers who end up buying from their competitors.

To address this issue, Best Buy brought in a new CEO, Hubert Joly, experienced in hospitality and travel.

The CEO was more concerned with the customer experience in their stores, which was a significant turning point for the company.

They initiated a plan called Renew Blue, which focused on reducing their expenses while improving customer service.

The company managed to cut billions, allowing them to lower their prices to match those of online retailers.

This was an intelligent move that got them many customers since direct purchases are preferred by most over online orders.

Best Buy became the most convenient choice for buyers since you did not have to wait for items like you would on Amazon.

They also made sure that the in-store staff was knowledgeable about the products they were selling.

They also improved services like the Geek Squad, which attracted more customers by helping them with repairs and other technical parts of the purchases.

They also added customer service after the sale is made. They offered services like installation and repair in case of damage.

Their Renew Blue plan concluded in 2019, and they started a growth phase, Building the New Blue. At this point, they emphasize doubling down on their services and customer care.

They have added smart Home and in-home advisor programs where a professional will come to your house and give you advice on your electronics needs for free. They have built relationships with other companies, and they continue to make positive sales.

Best buy employees do not get a direct commission from the company. There are payment incentives that are given to employees based on how well the store has performed.

This is a system that encourages teamwork and cohesion among employees. The general experience as a Best Buy employee is terrific, and there are some benefits attached to this.

There are employee discounts and training programs to improve your skills. Best Buy has had one of the most inspiring stories of companies in the US.

Amazon damaged most stores, and others collapsed, but Best Buy changed some aspects in its operation, and now they are flourishing. The new programs they are implementing will ensure that they have a bright future even with new retailers.