Why Can’t You Bring Liquids On A Plane? Check Out The Reason 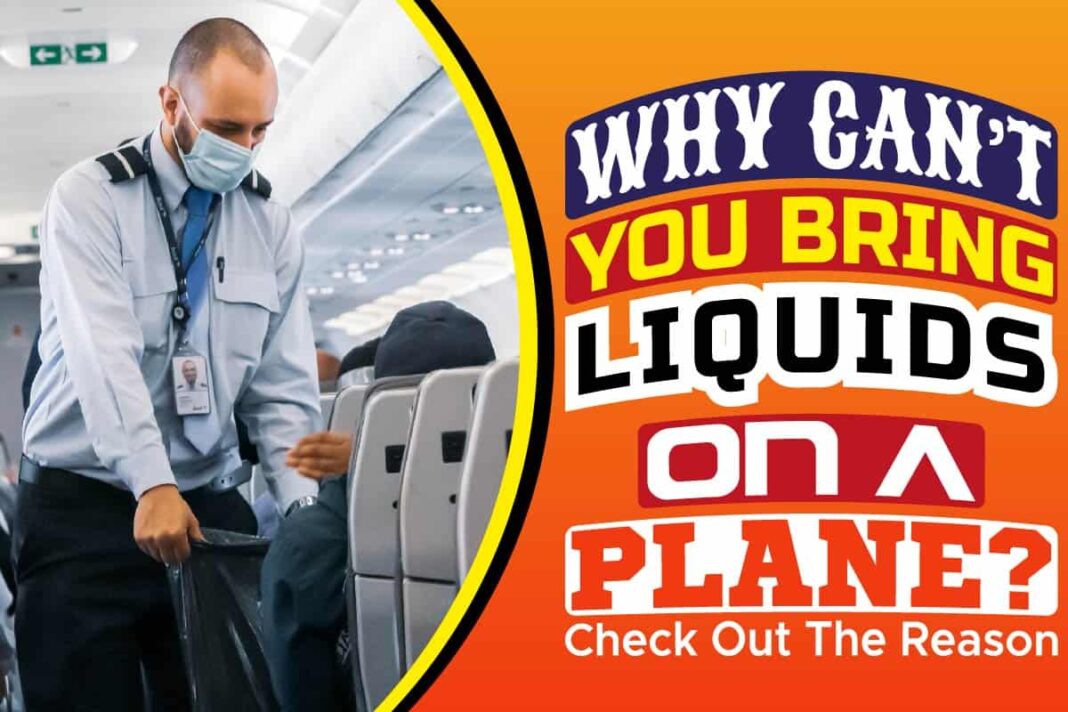 Long flights aren’t the type of trips you want to embark on now and then. They can take a toll on your fragile body and mind.

During such flights, you’ll get extremely hungry and tasty. And you know dehydration isn’t something you should turn a blind eye to.

So, when packing your bags and preparing for a trip, you may want to consider bringing some liquids. But, unfortunately, you can’t.

Liquids are forbidden in an airplane. Of course, you can have the ones provided for you on the plane.

Now let’s find the answer to the question below.

Why can’t you bring liquids on a plane?

You can blame the act of terrorism. TSA (Transportation Security Administration) enacted the 3-1-1 rule and banned liquids from airplanes in 2006. Why? They want to prevent terrorist attacks in the future. Terrorists can smuggle liquid explosives in a water bottle into an airplane.

Well, liquids aren’t the only thing banned from airplanes. There are several other items too. If caught with liquid, the security at the airport might toss your drink into the trash can. So, don’t bother bringing liquids or other items banned from entering the airplane.

If you must bring liquid, ensure the container isn’t bigger than 3 ounces. A report from a test conducted indicates that 3.4 ounces are the maximum volume of liquid that poses a risk to travelers.

There are cases where you can bring liquids on an airplane, though. We will discuss that in details in this post. Continue reading!

Is The Planned Liquid Explosive Terrorist Attack A Myth?

We wish it were a myth. Unfortunately, it happened. In 2006, the feds uncovered a plot by terrorists to use liquid explosives on planes. It would have been one of the biggest terrorist attacks in the United Kingdom.

But thanks to the doggedness of security officials, the planned terrorist attack never happened. This attempt made the government issue an immediate ban on liquids on airplanes. You can only bring your documents, important drugs and other valuables on an airplane.

What about baby milk? Yes, you can bring baby milk on an airplane, on one condition. You must be ready to taste the liquid in front of airport security officials to show that you aren’t carrying something else.

Airport officials know how crucial baby milk can be to a toddler and the mother. As a nursing mother, you can’t embark on a long trip without baby milk tucked in your bag. When the baby gets hungry, stopping him or her from crying would be difficult without food.

What The Ban Of Liquid On A Plane Is Today

It was thoughtful for the government to enforce the ban on liquids on a plane. Of course, millions of people were affected by the change, but it was a welcome development. Imagine the hundreds of people that would have died if the planned terrorist attack had happened.

When the government banned liquid on an airplane in 2006, many people didn’t like the idea. As a result, the British airline had to cancel over a thousand flights and lost over 50 million British pounds in that week.

However, it wasn’t long before the government reduced the strict ban. But, first, they had to implement the 3-1-1 rule, which has been in place since then.

The rule states that a passenger (one person) can carry a quart-sized bag to the airport for a security checkup before boarding the plane.

Liquids you can bring on a plane include aerosols (hairspray), liquid (shampoo, lip gloss, and perfumes), and creams (moisturizers, sunscreen). Others include gels (aloe vera or other hair products) and paste (toothpaste).

Now here’s the thing you need to do. Ensure all liquids are in a 3.4 ounces container before placing them in your bag. Toiletry bottles are also acceptable. Plus, if you can fit all the listed items in one quart-sized bag, you’re free to bring them to the airport.

3 (Containers mustn’t be above 3.4 ounces) 1 (you should be carrying one quart-bag) 1 (you can only carry one quart-sized bag on a plane)

Things Not Allowed On A Plane

Passengers are advised to note the list of things forbidden on a plane. If you bring them to the airport, the security personnel might confiscate them. It’s going to be your loss, by the way, so keep what you can’t bring on board an airplane, at home.

Firstly, you can’t bring dangerous materials on an airplane. These include knives, light fluids, and alcoholic beverages that boast over 70 percent alcohol.

Other items include household tools, firearms, and other things airport security deemed unworthy of entering the airplane.

Things Exempted From The 3-1-1 Rule

The TSA’s 3-1-1 rule is very much in place. However, there are few exceptions. That is, you can bring certain items to the airport and on the plane. Airport security won’t disturb you, but that item has to go through a separate security screening before you can leave with it.

Here are items that are an exception to the 3-1-1 rule:

We all know how crucial hand sanitizers have become since the coronavirus pandemic struck. It has become a crucial weapon in the fight to stop the spread of the virus.

The 3-1-1 rule only allows 3.4 containers on a plane. But that doesn’t apply to hand sanitizer containers, which happens to be 12 ounces or a bit smaller.

If you have a hand sanitizer in your travel bag, airport security will allow you to travel with it. But before you board the plane, you have to do a series of security checks. The reason is to reveal what you’re carrying in the container.

Having the needed medication while onboard an airplane can save a person’s life and ensure an airplane doesn’t make an emergency landing. So, the 3-1-1 rule doesn’t apply to medication.

You can bring gels, liquids, and aerosol, including the ice pack needed to keep them cool while on transit. But it would help if you didn’t store them in a resealable plastic bag. Instead, they should be in your luggage.

A Handy Tip: Please, try to alert airport security that you’re carrying medication and that you would need it while on the plane. It’s better that way.

Food and other items for the baby:

Your baby would need something to eat or play with while traveling. So, airport security understands you would have certain items in your bag for the baby, in addition to yours.

Items with liquid but aren’t subject to the 3-1-1 rule include baby milk, breast milk, teethers loaded with liquid or gels, including jarred or canned baby food.

You can also carry a freezer pack used to keep these foods cool. But make sure you take them out of your luggage and alert the security personnel at the airport of what you’re carrying, including their uses.

So, why can’t you bring liquids on a plane? We hope you now understand why. If the container you placed the liquid in is bigger than 3.4 ounces, forget about taking it to the airport.

The 3-1-1 rule forbids carrying liquid in containers bigger than 3.4 ounces on a plane. But there’s an exception, though. If it’s a hand sanitizer, which is highly needed in this time of the pandemic, security agents might allow you to travel with it.

Other exceptions to the 3-1-1 rule include medications, baby milk and breast milk, teethers loaded with gel or liquid, canned baby food, and so on.

You can look up items allowed on a plane before embarking on your journey. It will help you ensure you don’t leave anything behind or get embarrassed by airport security.

Which Is More Accurate, Mirror Or Photo? – What You Need To Know