Is Gasoline Renewable Or Non-renewable? A Must-read 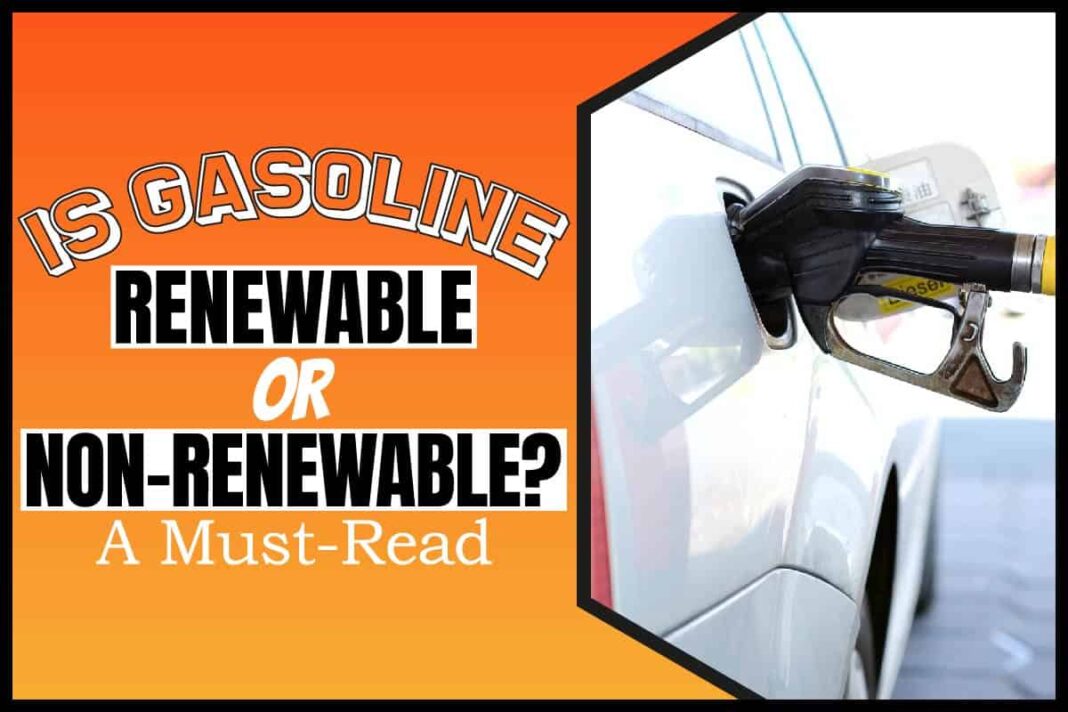 Gasoline is one of the most widely used energy products in the world. It is made from petroleum and used to power engines in cars, generators, trucks and industrial equipment.

Gasoline is transparent in color, volatile and highly flammable. But here’s one big question that has left many people confused.

Is gasoline renewable or non-renewable?

Gasoline isn’t in any way renewable. It’s non-renewable, which refers to a class of energy sources that depletes with usage.

That’s the short answer to the question, but we urge you to keep reading for more information.

More On Renewable And Non-Renewable Energy

Renewable energy is energy generated from natural sources such as wind and sunlight. They are renewable because they do not deplete by usage. They constantly replenish.

Renewable energy is also referred to as clean energy because its usage does not harm the environment.

Non-renewable energy, on the other hand, is the energy obtained from sources that are depleted with usage. Their usage generates by-products that are harmful to the environment.

Fossil fuels like gasoline are non-renewable. They deplete with usage and generate by-products that cause environmental degradation.

When Was Gasoline First Used In A Vehicle?

In the nineteenth century, people did not have use for gasoline. The refining of crude oil produced kerosene, and gasoline obtained was usually discarded.

Coal, kerosene, camphene and gas were the fuels at that time. The demand for more automobiles created the need for gasoline.

It became necessary to invent new methods to improve gasoline yield. This improved process is known as cracking.

Gasoline was first used as an internal combustion fuel in 1876 for the first gasoline-powered engine in Germany.

In 1892, John Froelich from Iowa built the first gasoline-powered tractor in the US.

Three years later, Charles Duryea of Massachusetts obtained the first US patent for a gasoline-powered automobile.

Gasoline is a homogenous mixture of light-weight aliphatic and aromatic hydrocarbons. Most of these compounds contain 4 to 12 carbon atoms.

Gasoline is a mixture of alkanes (paraffin), alkanes (olefins) and cycloalkanes (naphthenes).

Engines differ in performance specifications. So, various compositions of gasoline are possible.

How Is Gasoline Produced?

Fractional distillation is a process used to refine gasoline from petroleum.

Petroleum is found beneath the surface of the earth. Petroleum is from decomposed matter buried under the earth’s surface for millions of years.

Petroleum is a mixture of several components such as gasoline, diesel, kerosene, bitumen, etc. The refining of petroleum separates these components.

Fractional distillation is a process of the separation of mixtures into different components or fractions. The mixture is kept in a fractionating column and heated.

When the temperature reaches the boiling point of a particular component, vaporization will occur. The vapor will be collected into a condenser and then cooled to obtain these components.

The Economic Relevance Of Gasoline

Gasoline production occurs on a large scale at petroleum refineries. The production and marketing of this product creates thousands of jobs in many countries.

A lot of countries depend on petroleum products such as gasoline for revenue. Rise and fall in the prices can determine largely the economic indices of many nations.

Gasoline consumption Data from the US Energy Information Administration, about 2.94 billion barrels are consumed daily in the US.

One barrel is equivalent to 159 litres.

The US is the largest consumer of gasoline in the world. They are followed closely by China and Japan.

The Impact Of Gasoline On The Environment

Air pollution is harmful to human health. The products of incomplete combustion of fossil fuels can damage our liver, lungs and even cause cancer and several diseases.

An example of greenhouse gas is carbon dioxide. Greenhouse gases absorb heat from the atmosphere and warm the earth.

Greenhouse gases help to keep the earth warm. However, the rise in petroleum products has increased the number of greenhouse emissions.  This development has led to an environmental condition known as global warming.

Global warming is the resultant effect of the long-term heating of the planet caused by the rise in greenhouse emissions.

Global warming has potentially devastating effects on our planet. This development has raised serious concerns over our future and has led to the campaign for cleaner energy.

One of the most damaging effects of global warming is an increase in temperature across the world. Extreme weather conditions, chaining animal migrations, rise in acidification, melting of ice are all manifestations of global warming.

The Future Of Gasoline

A large chunk of cars around the world use internal combustion engines and so depend on gasoline. This market statistic will eventually change as electric cars are becoming popular.

Electric cars are battery-powered. As such, they do not burn fossil fuels like gasoline that generate substances that pollute the environment.

Environmental concerns have increasingly led to a surge in the campaign for cleaner energy.

This campaign has raised interest in electric cars as a much safer alternative to gasoline-powered automobiles.

Government legislation is lending support for cleaner energy alternatives. This development is driving investment toward the production of more electric cars in the coming years.

As we have earlier stated, electric cars do not have internal combustion engines. So, they do not require gasoline or petrol. They also do not need the oil changes and maintenance required for proper function by gasoline-powered automobiles.

Electric cars may have higher purchase prices but have lower running costs than gasoline-powered cars. They are cheaper to maintain.

A large number of generators use gasoline. Steam turbine engines also use gasoline. As with vehicles, gasoline use for power generation has waned in recent times.

As the revolution towards cleaner energy continues to gain a foothold across nations, gasoline will likely become irrelevant as energy sources for vehicles and power generation.

According to a report by the Climate Council of Australia, eleven nations are leading the push for renewable energy.

These countries have passed resolutions to reduce the use of non-renewable energy in their various domains. Some even aim to abandon fossil fuel as primary energy sources.

In South America, countries such as Uruguay, Nicaragua and Costa Rica have achieved more than 90% electricity generation from renewable sources.

In Europe, Sweden, Denmark and Germany are at the forefront of the clean energy revolution. They have started implementing policies that seek to reduce the usage of fossil fuels, promoting investment in cleaner energy.

The production of large scale infrastructure in solar, wind and geothermal energy is on the rise in Africa. Kenya is leading the development of renewable technologies in this regard.

Proper Storage And Handling Of Gasoline

Gasoline is flammable and can be dangerous, so proper storage and handling is required. Here are some guidelines below.

Gasoline should be stored at room temperature and kept away from heat or light. Storage should be in well-ventilated areas.

Gasoline storage should be only in approved containers which should be kept tightly closed.

Gasoline should be added to small engines only when the engine has cooled.

Gasoline should be kept in a separate building or shed, away from where the occupants stay.

Do not mix gasoline with or components of petroleum such as kerosene or diesel.

Use gasoline appropriately. Do not use gasoline in kerosene lamps or anywhere else that is not approved.

Gasoline is a flammable transparent liquid refined from petroleum used to power internal combustion engines in cars and generators.

Gasoline is non-renewable because it depletes by usage.

Gasoline usage began in the nineteenth century following the rise in the production of automobiles.

The first US patent for a gasoline-powered automobile was obtained in 1895 by Charles Duryea of Massachusetts.

Gasoline use produces by-products that cause air pollution and harm the environment.

Gasoline usage will reduce drastically in the future. There is a serious push for the adoption of renewable sources of energy.

Electric cars are becoming increasingly popular alternatives for clean energy. They may be more expensive to purchase but have lower running costs than gasoline-powered cars.

Kenworth Vs. Freightliner: See What Differentiates Both Trucks

Does Lockdown Browser Record You? You Need To Read This Now

The Mystery Of How Many Microsoft Word Pages Equal A Book Page, Solved