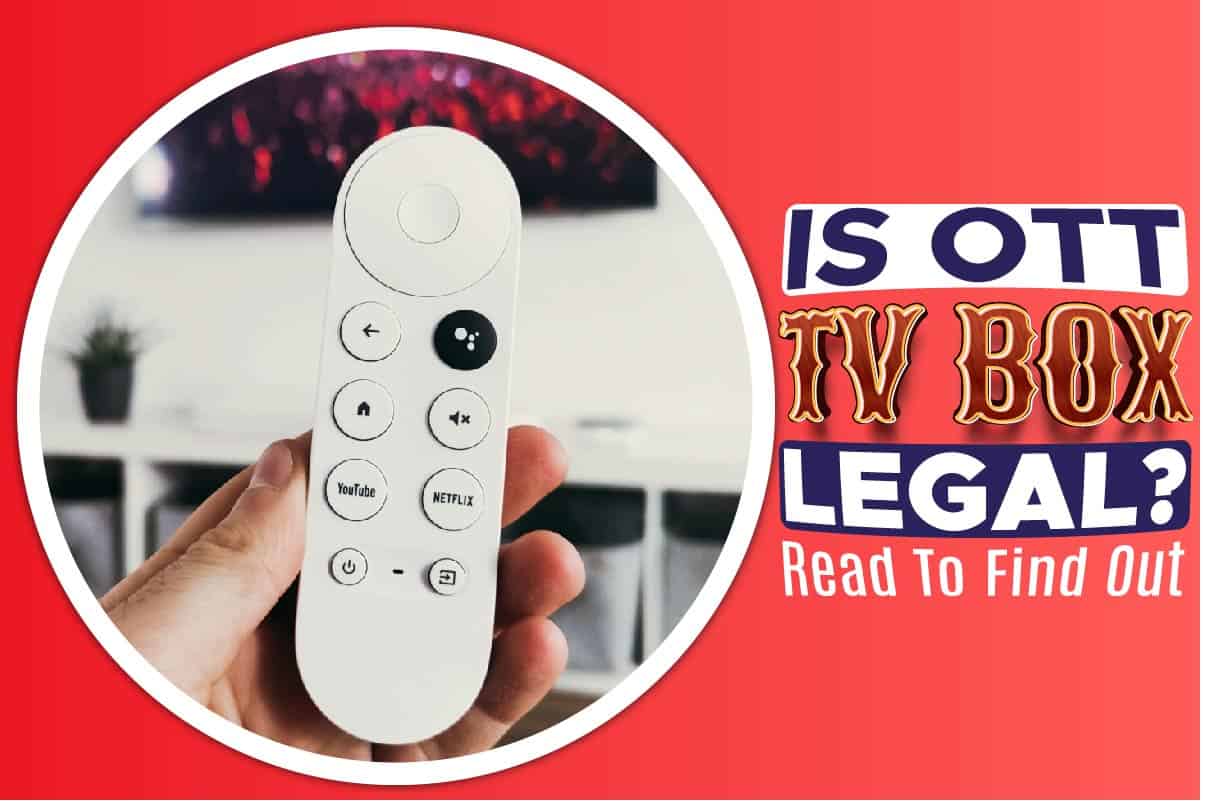 OTT is an acronym for over-the-top. It refers to devices that give users access to TV content without the traditional cable connection.

An OTT TV box enables users to stream television content via an internet connection. An example of an OTT device is the Apple TV.

As the internet continues to develop, human behavior has also continued to evolve. More people are beginning to adopt better technologies over traditional methods.

Now, to the big question: Is OTT TV box legal?

OTT devices are now mainstream in the US. As such, questions regarding the legality of OTT TV boxes have generated a lot of concern in the digital market.

Yes, the OTT TV box is legal. However, legality depends on the nature of usage. Copyright laws regulate the use of TV content.

The Copyright Act of 1976 governs the conversation on the legality or illegality of TV streaming in the US. This law gives copyright owners exclusive rights to duplicate and distribute their content.

This law states that only copyright owners can make copies of their content and distribute them to other people or organizations.

So, you can access live TV over the internet. Even if you do so without any authorization, you may still not be breaking any law. But should you duplicate that content or even distribute them without permission, you will be breaking the law.

In What Ways Is OTT TV Better Than Traditional Television?

Here are some ways in which OTT TV is better than traditional media.

These installations also require technical attention from time to time. Something might get faulty and may need to be fixed or replaced.

Should you want to relocate, uninstalling and reinstalling cable connections will be burdensome.

An OTT TV does not need much infrastructure. You will only need an OTT device and an internet connection, as there is no need for wires or a dish or poles.

You will make periodic payments to cable companies, usually monthly, to keep watching television content. The price usually depends on the package.

How much you watch either does not matter. You will have to pay another subscription when your time expires.

Recently, cable firms have started offering pay-per-use packages to remain competitive. However, they still have a limited selection of stations you can access.

OTT TV is more flexible. You can tailor your expenses to your usage. You can decide how much television you want to watch and when you want.

Cable companies determine what you watch. If you subscribe to a particular cable company, you will only access what they offer. Cable companies do not have universal offerings in terms of television stations.

So, you will have to make do with what your cable can offer unless you intend to have more than one cable connection in your house. This option is not a choice for many people.

OTT TV gives users access to a vast range of television content. You can watch whatever you want, whenever you want, and however, you want.

From sports to movies, there is hardly any station you cannot stream on the internet.

Imagine you wanted to watch your favorite sports show and you were far away from home. You would have to find your way home or miss your show.

This limitation is the major bane of cable TV. To access content over a cable network, you must have a television.

Mobile devices can access OTT TV over the internet. So, it doesn’t matter your location at a particular time. You can still watch the Champions League final on your phone.

#5: Sometimes, you don’t even have to pay

Cable TV does not offer free content. If they ever do, they are often unpopular choices. Premium content is usually only accessible to paid subscribers.

OTT TV is so popular now that it appears that it has always been mainstream. The truth is there was a time when all we had was cable television.

Yes, we thought cable tv was great until OTT TV came along and blew our minds. So, what is the story behind OTT TV? How did OTT TV begin?

Let us go back in time.

The story of cable television

NBC was the first network television station. It began broadcasting in 1939. ABC and CBS later emerged. Together with NBC, they ruled mainstream television for a while.

Although it arrived in 1941, cable television did not become popular until the Satcom satellite launched in 1975. Satcom’s launch led to the rise of cable TV.

Television stations such as HBO, ESPN, and C-SPAN began to emerge. HBO was the first paid television network with the rights to syndicate content in the US.

In 1984, the US Congress passed the Cable Act. This landmark law deregulated cable television and led to the boom of cable television. More operators entered the market.

The Advent Of OTT TV

As cable TV subscribers grew, there was a need to improve cable services. Cable television operators invested billions in high-speed internet. This development paved the way for OTT to develop.

The DVR came in 1999. For the first time, people could control what they wanted to watch and when. This limitation was the major challenge of cable television.

OTT TV began to gain a foothold a decade ago when TV began to switch from analog to digital. The period under review saw the first iPhone launch, along with Web 2.0. Users could now access television networks on a mobile device. The smart TV is an invention of the OTT revolution.

These developments made user control of content possible. Users could decide what they wanted to watch and whenever they wanted.

It was easy for many OTT TV providers to emerge. They did not need to operate their network.

They only delivered content over other people’s networks. This development raised legal concerns.

Eventually, there had to be regulations. Government regulations allow OTT TV to operate under stated guidelines. These guidelines consider the rights of copyright owners.

The Future Of OTT TV

Technological advancement has made life smarter. High-speed internet is becoming even faster. Smarter, faster, and more interactive devices are emerging every day.

5G has made television streaming faster and even more exciting.

These factors are also improving user experience in entertainment. So, OTT TV is here to stay.

The players in OTT TV have upped their investment as they seek to enhance the consumer experience. Conviva reports that Netflix invested about $17billion on original content.

What Next For Cable Television?

Cable TV subscription is on the decline in the US. Forecasters have predicted that at least 33% of people will abandon cable service in the coming year.

Cable television is facing stiff competition from OTT TV. Cable companies will have to adopt new strategies to remain relevant in the media industry or face extinction.

One way is to unbundle cable television so that customers can be free to choose and pay for only what they want to watch.

Cable companies will also have to restructure their advertising models. OTT TV is mainly subscription-based, as users prefer fewer ads in their content. They are annoyed by too many ads.

Advertising is one of the sources of revenue for cable television operators. However, to remain in the competition, they will have to shift to subscription-based models.

An OTT TV box gives users access to television content via an internet connection. Streaming services have become mainstream in the US.

OTT TV box is legal if the user does not copy and distribute content without authorization from the copyright owner.

Advances in technology have changed the way humans use things. OTT TV is cheaper, more flexible, and more convenient than cable television.

Cable television is facing extinction in the years to come. They will have to adapt by giving users more flexibility if they have to remain relevant.

Why Can’t You Bring Liquids On A Plane? Check Out The Reason

How To Remove Liquid Screen Protectors? A Detailed Guide