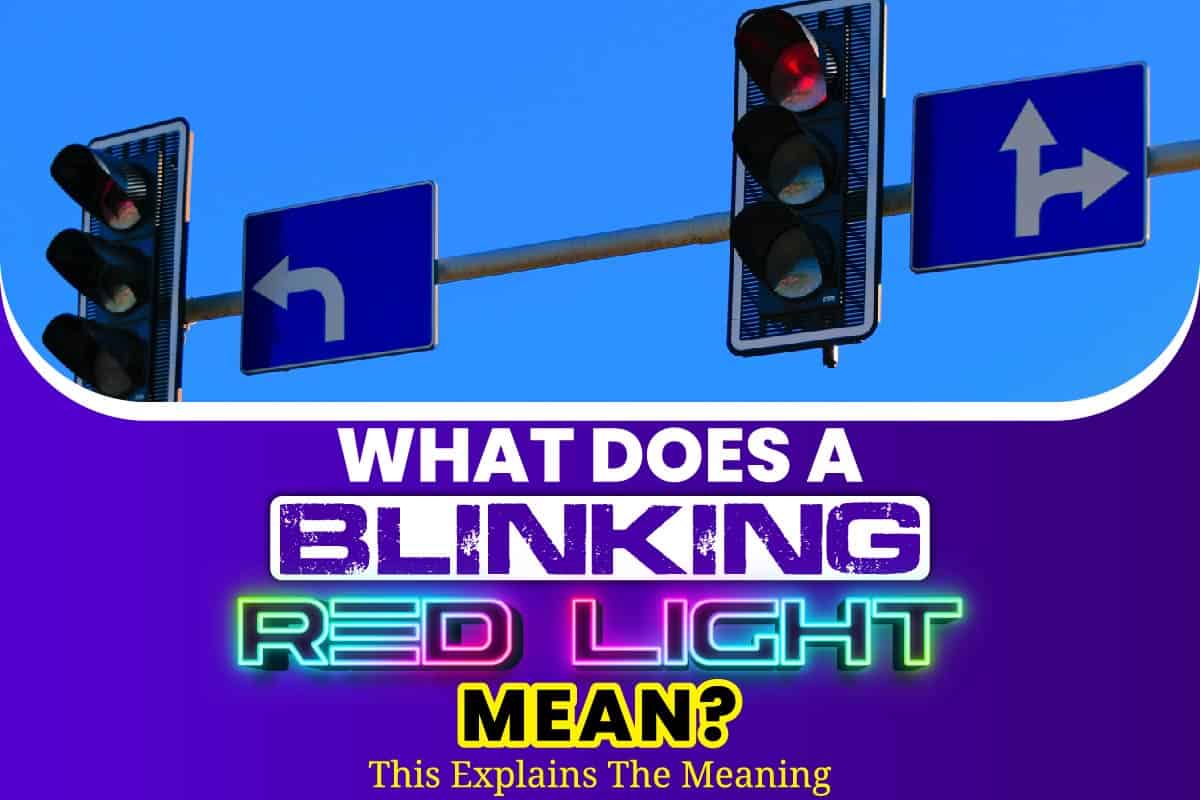 Traffic lights are devices mounted on the side or above the road to warn road users and regulate traffic. They are for all road users, pedestrians, cars, motorbikes, etc.

These lights are “warning” lights. Each light on the device represents something, which should hold meaning to all road users. The red light means stop. The yellow means ready, and the green means go.

So, to the question:

What does a blinking red light mean?

This post has more valuable information on the topic. So, read on!

What Should One Do When There Is A Blinking Red Light At A Railroad Crossing?

As a precautionary measure, modern railroad crossings come with a mini gate that shuts once the red light blinks to prevent railroad accidents. The gate automatically opens when the train passes, and it is safe to cross.

What Should An Individual Do When You See A Blinking Red Light At A Crosswalk?

You must stop for pedestrians when the traffic signal turns red and starts blinking. You can only pass when you’re sure no pedestrians are crossing the road.

What Do The Other Traffic Light Signals Mean?

Many people are familiar with traffic lights and what they represent, especially the solid unblinking lights. So, when a blinking light appears, they get confused about what it means. So here is a brief explanation of what each light represents (steady or blinking)

Is the traffic light showing red? Then, you must stop. You stop until the light changes to green.

Once a yellow appears, it simply means you should prepare for the red light. The red appears seconds after the yellow light.

When the yellow light appears, you should slow down in preparation for the red lights.

However, there are cases where the driver moves at high speed and might not slow down before getting to the intersection. In this case, the driver might choose to speed up before the light turns red.

You don’t need to stop at a flashing yellow light. Though, you might need to slow down and move with caution.

The green light means go! You’re free to go every time you see the traffic light turn green. But as much as green is the sign to go, you still need to be watchful before you go. Because not everybody would adhere to traffic rules, which is unfortunate, some individuals still run red lights to date.

Can I Make A Right Turn When The Light Is Red?

It is possible to turn right when the traffic light is red. Though, you can only do this when no signs are warning against it. You would also need to be careful.

It would be best if you yielded to pedestrians and vehicles moving because their signal turned green.

Do A Traffic Light Move From Green To Red?

Traffic lights always follow the sequence green-yellow-red. The yellow is to prepare road users for the stop. Traffic lights do not go from green to red, except the traffic light is faulty.

The yellow light is like a buffer. Going from green to red would cause avoidable accidents. Imagine you were already in the intersection when the light turns red, and there is an oncoming speeding vehicle. It would be almost impossible to avoid an accident.

What Do The Arrows In Traffic Lights Mean?

The arrows always appear in the standard traffic light colors (red, green, and yellow). The arrows are pointers to road users on different lanes that it is safe or not safe for them to move in particular directions.

The green arrow pointing to the left, right, or straight-ahead means that drivers can go in any of those directions. The same applies to red lights.

If the arrow pointing straight is green and the one point right is red, people going straight can go while those going right should stop.

How Do They Know The Right Places To Install Traffic Lights?

Majorly traffic lights get installed at pedestrian crossings, intersections, and places that need an easy flow of traffic. Traffic engineers are responsible for determining whether traffic lights should get mounted. They weigh the pros and cons of installation at a particular place and decide from their deductions.

If the engineers conclude that a traffic light is necessary for a particular location, the lights get installed. After their installation, the engineers have to monitor and modify them regularly to ensure that they remain helpful to road users.

If the regular checks show that the lights are causing more harm than good, installing a traffic signal will be reconsidered to ensure it is the best option.

Do Traffic Lights Have Disadvantages?

Yes, they do. It is surprising to people that something as useful as traffic lights would have disadvantages. The advantages include:

These advantages do not wholly take away the disadvantages.

Drivers can become restless and aggressive while driving. This impatience is usually a result of long delays. While at other times, it may be as a result of malfunctioning traffic signals.

When drivers get impatient, People may run more red lights, traffic laws may get broken, and drivers may swerve onto side streets.

Increased accidents, congestion, air, and noise pollution can all result from aggressive driving.

One of the most severe disadvantages of traffic signals is that they increase rear-end vehicle collisions. Rear-end collisions happen when a road user (driver) unexpectedly stops when the traffic light turns red or yellow. This unexpected stop could cause an unmindful road user (driver) to drive into the back of the vehicle in front of them.

These collisions are generally less severe than broadside collisions. So, this may cause people to downplay how much of a disadvantage it is.

However, installing traffic lights at an intersection where broadside accidents are not an issue can increase accidents. Risk-benefit tests often determine whether traffic lights get installed. The advantages are compared to the disadvantages and the best result chosen.

As traffic lights control traffic flow, they may also lead to traffic delays.

Long waits are from waiting for a traffic light to turn green or turning a car to cross an intersection safely. Long delays can result in air pollution, fuel wastage, and additional costs for motorists. Drivers may be unaware of these hidden costs.

Traffic lights can be costly when compared to stop signs. It isn’t cost-effective to place a traffic light, whereas a mere stop sign can do the job.

The cost of installing and maintaining isn’t the same in every state. The buying and installation of one light in Washington would cost 250,000-500,000 US dollars. At the same time, it cost 8,000 dollars for its yearly maintenance.

In Missouri, buying and installation of traffic lights are between 100,000-150,000 US dollars. The cost of yearly maintenance is roughly about 4000 dollars. On the other hand, a simple stop sign can cost up to $400 to manufacture and install.

Stop signs cost less because there is no electrical system to maintain compared to traffic lights. These signs may be a more viable option for keeping city costs down when they make sense to install.

The blinking red light is a traffic light signal that means a driver or pedestrian should stop, and like many other traffic signals, it has saved lives by preventing major accidents.

As crucial as installing traffic lights are, they would be useless if road users didn’t understand them. Thus, the reason everyone should know “what does a blinking red light mean” is crucial.

The next time you see a traffic light, know that it is there for your good. And whatever disadvantage you might notice is nothing compared to the advantages.

What Is A Broker Co-Op? Things Property Buyers And Sellers Should Know

Can You Use A Windows 10 Product Key Twice? This Is A Must-read