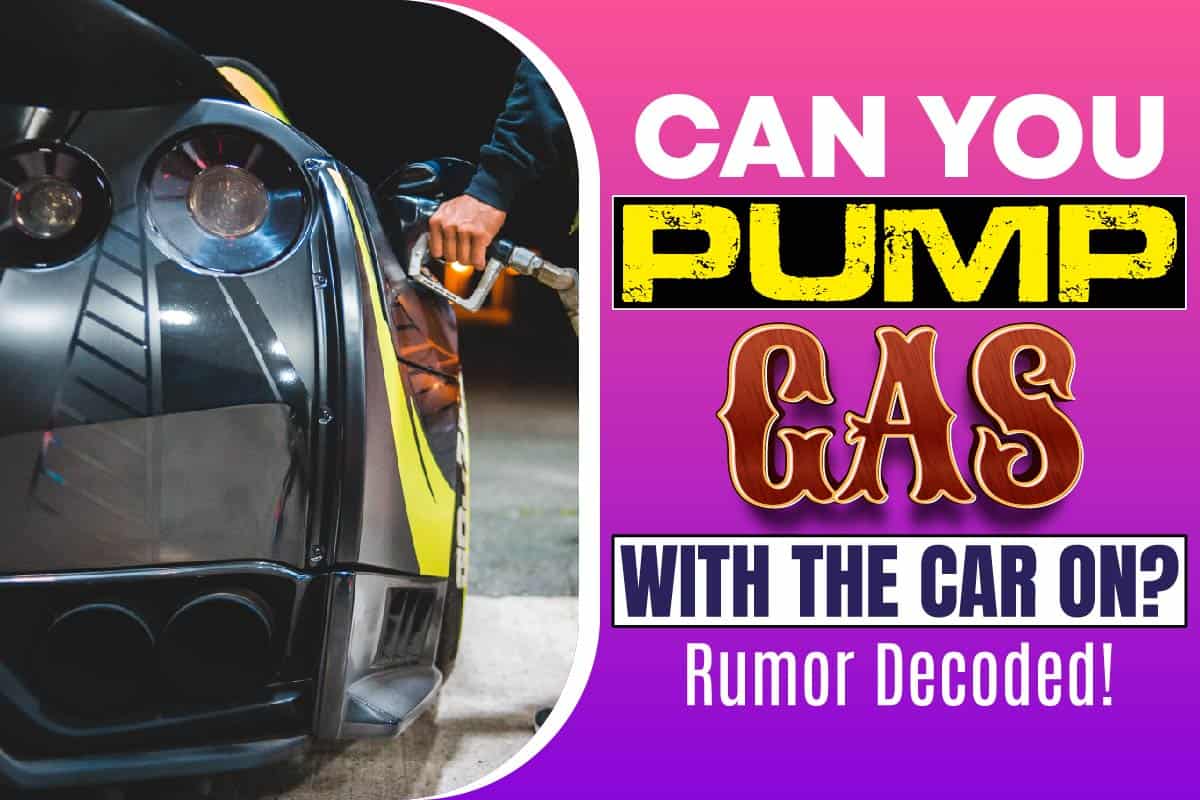 There is a sea of myths surrounding cars and vehicles, some of which are so absurd that it seems like a blatant lie. For example, some people say that you should make the engine heated up before driving in winter, which does not have much scientific basis.

But there is another well-known saying that everyone preaches, which is very much true.

While many might question, “Can You Pump Gas with the Car On?” the answer is no. This brings us to the well-known saying we mentioned: never fill up gas on your car having the engine ignited.

You might still wonder why this is considered accurate. What is the scientific reasoning behind it? You will get the answers to all your questions in this article. So keep reading!

Dangers Of Pumping Gas While The Engine Is On

By now, we have made it clear that it is not recommended to pump gas in the car while the engine is running. If you are still unsure, then let us tell you about the risks associated with it, that can turn out to be extremely dangerous, and in some cases, fatal:

Risk of an Explosion

The first are major risk associated with getting gas on your car while its engine is turned on is the hazard of an explosion. Although it is not sure that this incident will always occur, there is a great deal of chance that it might.

The two main catalysts that can cause this to happen are the vapor from the gas and the car’s static electricity.

The fuel you use in your vehicle is highly volatile and flammable, due to which you will see anti-smoking banners in most gas stations. Having any source of fire nearby a gas pump can be hazardous, for which such caution is recommended.

You will also find that some stations will ask you to turn your car off while pumping gas. The reason behind this is the static electricity that runs through your vehicle when the engine is on. This can cause ignition by coming in contact with the vapor produced by the gasoline being poured in.

This ignition can further be triggered by the liquid fuel being poured in due to its flammability. As a result, an explosion might happen, which will not only put you at risk, but everyone else working at the gas station.

Disturbance with the Engine Check Light

Aside from the danger of encountering an explosion, you might also cause some damage to your vehicle by pumping gas with the power on. Modern cars and their engines are designed to detect fuel leaks. And when this happens, the light of the check engine system turns on.

Although this is the standard mechanism, and it usually occurs when a gas leak from the engine is happening for real, it might turn on for no reason when you leave the car on during pumping gas. This can create a great deal of disturbance and even confuse the driver.

This usually occurs as electricity runs through the car while it is on, and the tank is being filled up; the seal over the tank remains open, which exposes the tank. The car’s computer system mistakes this as a fuel leak and starts giving alerts to avert any danger.

Some people tend to leave their car engines on during the colder season to enjoy some heat inside the car while it is re-filled. Although this might temporarily keep you warm, there are dangers associated with it.

Repeatedly opening the door to enter and exist might cause the electricity running through the car to accumulate using your clothes as a conductor. This electricity coming in contact with the gas fumes can cause a fire. And since it is the dry season of winter, people tend to be wearing multiple layers of warm clothing.

Therefore, try to open the car’s door with your unclothed hands to ground yourself and keep the engine turned off. This will prevent the risk of any fire or explosion.

Precautions To Undertake While Pumping Gas

To prevent accidents from happening while refueling your car, it is essential to undertake some precautions apart from turning the engine off. Some of the most crucial ones are mentioned below:

Apart from the car’s engine, several other sources of static electricity might cause a fire in the gas station. Being around so many potential flammable sources, it is best to park your car, turn off the engine and switch off devices like your mobile phone, charger, laptop, etc.

Another hazard that should be avoided in a gas pump is igniting a lighter to light a cigarette. This small fire can react with the gas vapor floating around and cause an explosion. Therefore, most gas stations prevent users from smoking on their premises.

During pumping gas into a vehicle, it is highly recommended that passengers inside either get off of it until the job is over or not get on and off repeatedly. What happens when one does that is static electricity builds up, and as soon as the person holds the metal handle of the door, a spark might ignite and cause a fire.

Keeping Full Attention on the Gas

To stay alert of any danger, you should avoid doing other tasks like looking at your phone while refueling.

Fill Up the Tank According to Its Capacity

Sometimes not paying enough attention during the fuelling might cause the tank to become overfilled. As a result, gasoline might overflow and cause a big spill. If there is any potential source of ignition nearby, this can cause accidents. Therefore, only fill the tank up to its capacity.

Don’t Let the Gasoline Come in Contact With You

Gasoline is highly flammable and can cause irritation if it comes in contact with your skin. So if you happen to spill some on your hands, don’t forget to wash it off using warm water. And if it somehow gets into your eyes, you must not rub the infected area and instead wash it with water for 10-20 minutes till your eyes stop stinging.

Take Care of the Kids

Kids might get on and off the car frequently or run around, which might cause any kind of unwanted accident. So make sure to keep an eye on them and stay alert to prevent any sort of unforeseen event.

Stay Away from the Fire If an Accident Happens

Despite taking all sorts of precautions, if you still notice any spark during pumping gas, immediately step away from the fire source and call the staff working there along with 911 to prevent it from getting bigger.

Making Use of the Proper Containers to Carry Gasoline

When you want to carry gasoline with you in your long travels to fill up the car in case of an emergency, make sure to use an approved container of good quality. Don’t buy anything that’s cheap and might leak.

Also, check the reviews properly before purchasing one. The container should be easy to carry and leakproof. Its cap should tightly latch in order to prevent gas from spilling out. Moreover, always keep the cap on while inside the car. And don’t store it on the trunk as it might get too heated there.

You should also not put the container in direct contact with the sun’s heat as that might make it too hot and dangerous.

“Can you pump gas with the car on?”— After reading this article, you must be clear with any sort of confusion regarding this query. To sum it all up, you should never refuel your car with the engine on under any circumstances.

This is risky and can lead to an explosion if the static electricity of the car happens to come in contact with gas fumes. You should also not use your cell phone while in a gas station and refrain from lighting a cigarette as these events are also hazardous and cause a flame.

In short, it is best to pay full attention to the nozzle and the car while filling up gas in order to complete the task safely.

How To Get Gas With A Debit Card With No Money?

Getting Familiar USPS With Terms: What Does Out For Delivery Mean USPS