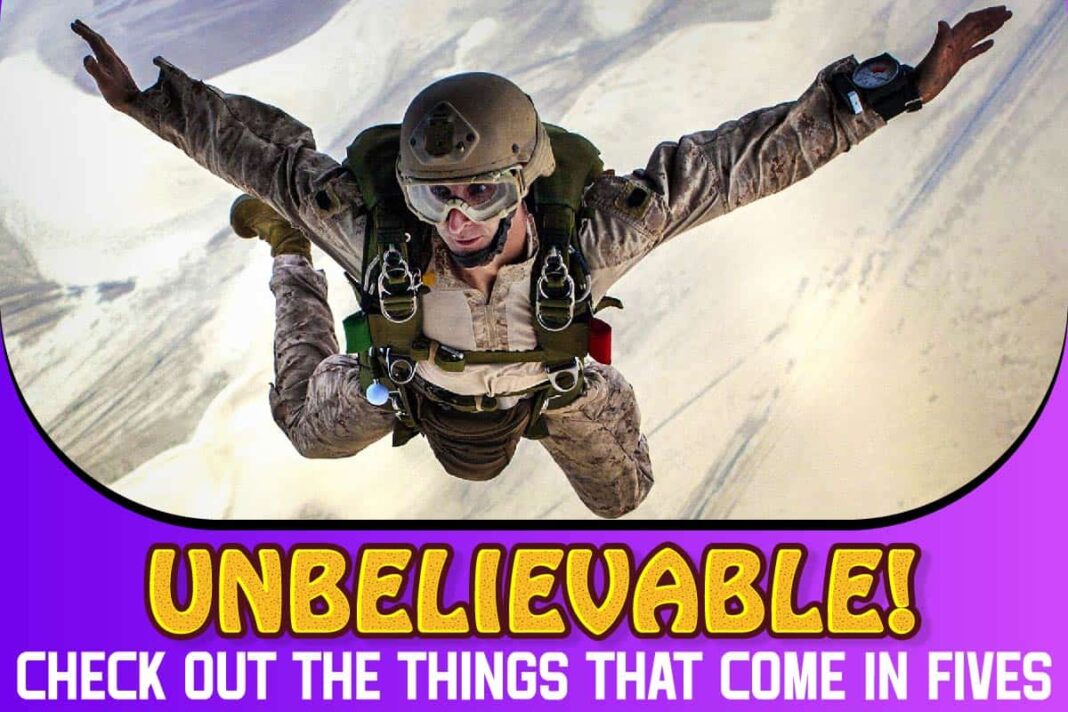 According to the Chinese, the number five isn’t ordinary. They believe that every significant thing on earth comes from five elements. Whether it is metal, fire, earth, wood, or water, the Chinese infers that these things all have a unique similarity- The number five.

Looking at the world and its constituents closely, we can see what they mean. We see it in the different combinations of fives in the human body and the different earth components.

This post discusses various things that come in a combination of fives and how a distortion in these combinations may or may not affect balance.

Things that come in five

Words with the prefix Penta are mainly a group of five items or things that connect to five. For example, there is pentagon, a pentathlon, and Pentateuch, etc.

Several things come in groups of five. These things exist whether you believe in the Chinese theory or not. Some of these groups include the fingers, toes, vowels, food groups, the great lakes, the human senses, and many other items. There are famous people groups as well, for example, spice Girls and Marx brothers.

Examples Of Things That Come In Five

Let’s look at some common and uncommon groups of five:

The sense organs are how the body communicates with its environment. They receive information that gets transmitted to the brain for interpretation. They contribute greatly to keeping humans healthy, functional, and safe. The five senses are:

The bones and fat in the orbits protect the eye. The eye consists of the sclera, the cornea, iris, pupil, lens, optic nerves, etc. These parts have their functions. The sclera surrounds a round portal formed by the pupil, iris, and cornea. It is white. The pupil is a hole in the colored disk of the iris. The iris dilates or constricts, changing the amount of light that passes through the pupil and onto the lens. The optic nerve transports signals from the eye to the brain, where the brain interprets to form visual images.

The inner ear is made up of fluid-filled canals. The ossicles pound on pressure waves in the fluid, sending signals to the brain via the cochlear nerve, interpreting the signals as sounds.

he outer epidermis, the dermis, and the inner hypodermis are the three major parts of the skin. Tactile sensations get detected by specialized receptor cells, and they pass on signals to the brain. Merkel cells stay in the lower epidermis of the lips, hands, and genital organs. Meissner corpuscles thrive on the fingertips, nipples, and soles of the feet. All these cells work together so that touch, pressure, and vibration get detected by both of these receptors.

Your tongue houses the papillae, which is the home of the taste buds. These papillae are small bumps on the tongue. When we eat, food chemicals enter the papillae and reach our taste buds. Signals are sent to facial, glossopharyngeal, and vagus nerve fibres by the receptors. These signals are transmitted to the brain.

The third book is majorly about  Israel’s culture. And how the enforcement of the culture  by the provision of a set of laws to assist them in meeting their requests when coming to God, who will live among His people in holiness.

In this book, God directs Israel’s march, but Israel defies God’s command. However, their disobedience isn’t enough to hinder the promise. The promised blessing must come to pass.

The story of the promised land and the covenant with God that they would enter the land is what the last and fifth book of the Pentateuch contains.

The five food groups: A balanced diet consists of five main food groups, the groups are:

We all need a certain amount of fat in our diet. The reason people are so opposed to fat is that we tend to consume too much. Plant-based oils, such as vegetables and olive oil, are high in unsaturated fats. Consuming these types of plant-based oil can help lower cholesterol and reduce the risk of heart disease. So, instead of using butter, use a spread with reduced fat content.

Rice, bread, potatoes, and pasta should account for roughly one-third of your daily calories. Starchy foods are high in energy, essential fibre, calcium, iron, and vitamins. Starchy foods contain less than half the calories of fat, gram for gram. Adding extra fat to starchy foods such as butter, oil, spreads, cheese, or jam adds more calories.

Examples of food that contains protein are fish, meat, peas, lentils etc. Protein is a necessary part of an individual’s diet. And age should determine how much protein a person consumes. Protein helps the body build and repair cells and tissues.

The army is the biggest branch of the military and also the oldest. The United States Army must defend the country, all it has, and its territories. It does this by making available forces and capabilities for combat and stable operations on land. Other branches of the military depend on the army for support and logistics.

The Navy serves as the main barrier to aggression all over the world. The Navy maintains and prepares combat-ready maritime forces skilled in warfare, preventing aggression and guaranteeing maritime freedom.

The Air Force makes available a quick, flexible, and deadly air and space capability that can deliver forces anywhere in the world in less than 48 hours. It frequently takes part in peacekeeping, humanitarian, and evacuation missions.

The Marine Corps is a quick response force that the United States can use to overpower the enemy.

The Great Lakes are one of the world’s largest freshwater surface ecosystems. They are an important part of North American heritage (physical and cultural). These vast inland freshwater seas, shared with Canada and spanning more than 750 miles from west to east, provide water for consumption, transportation, power, recreation, and various other uses. The lakes are

The English alphabet and many other languages have A, E, I, O, I as the major vowel sounds. Every other letter is a.

The pentathlon is a tournament that involves five different events. In modern times it is featured in the Olympics. The modern pentathlon is:

The Chinese theory about the significance of the number five may not be believable, but you can’t deny that many things come in a group of fives.

This post shows an example of things that come in groups of fives and their importance to humankind.