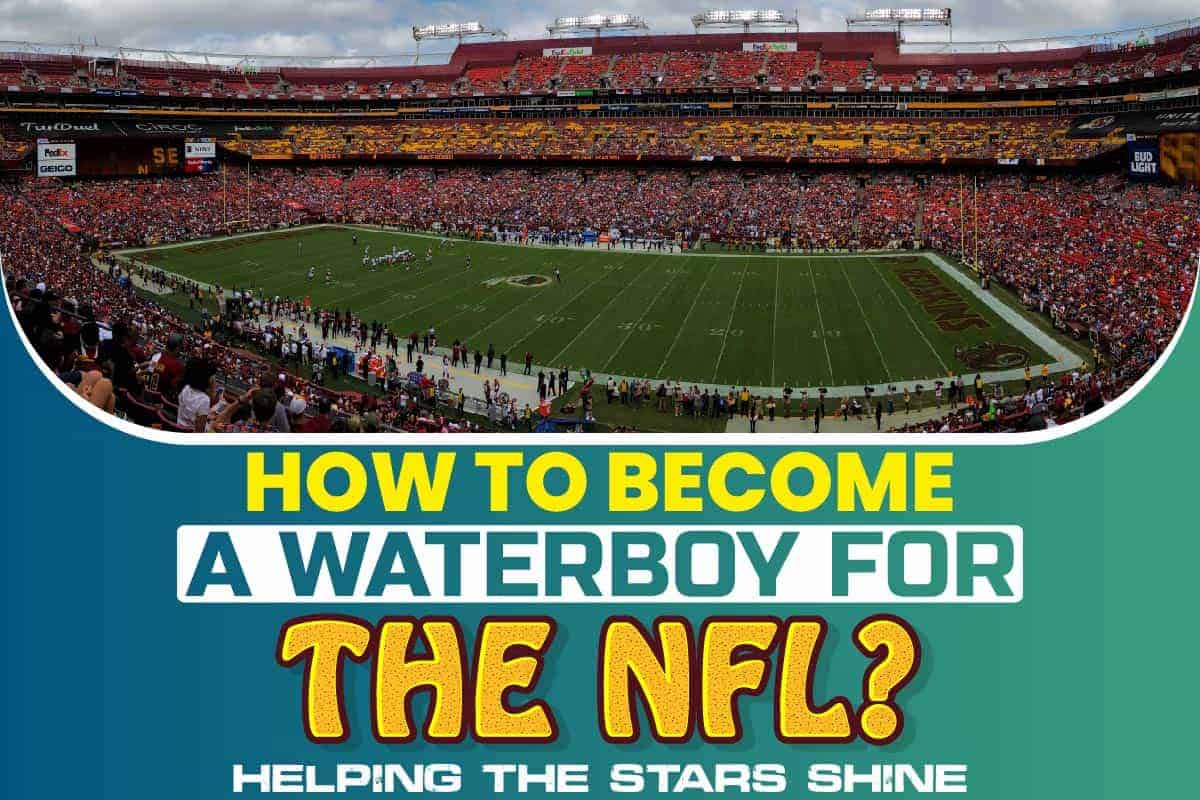 Sports are diverse, but most people only think about their favorite player when talking about the NFL, the NBA, or other sports leagues.

Like directors in movies, some people are not seen on screen, but they are vital to the players’ performance.

One of these unsung heroes is waterboys. These are people that make sure the players are well hydrated during their games.

In any high work rate sport like football, the players need a lot of water to stay at the peak of their performance.

Let us look deeper to see how you can support the players by being a Waterboy;

How to Become A Waterboy For The NFL

If you want to work as an NFL Waterboy, you need to have connections with the right people that can get you the job.

It is not rocket science, so virtually anyone of legal age can do the job provided you are vetted and you pass.

Talk to any official you know in professional football and ask them about any openings. Make it clear to them that you are interested in being a Waterboy, and they might get you a spot in a game.

Most college football coaches are professionals; thus, they know NFL officials. If you don’t know any NFL officials, you can talk to your local college team coach.

Politely introduce yourself and explain your intentions to support his players and even the NFL.

A college coach could put in a word for you and secure the job. If you have sights on a specific NFL team you want to join, you can apply for the position and forward the application to the team’s management.

You can also go to the teams’ website or the NFL website and see if the spot is available for you to apply. It would be a big advantage if you knew someone who works at the teams or the NFL.

Another way to get the job is by volunteering. When you volunteer, you will go through the doors and meet the officials. Your work as a volunteer will allow you to make connections and build a reputation.

You will be at the top of the list when a job opportunity opens up since you will be valuable to the team already.

You will not go in as a Waterboy necessarily, but in whatever post you get, try to network with as many people as possible to increase your chances.

What Does An NFL Waterboy Do?

If you get the job, you need to know what is expected of you to keep the job and help the team the best you can. So what does a Waterboy do on the field, and where is he supposed to be?

In the 20th century, Waterboys or Watergirls worked in the fields to provide water for those working on the farms. The idea was to keep the work going on without having to leave to get water.

The same idea has been integrated into sports, and the Waterboys stay at the sidelines during training and games to provide water for those in the session.

A Waterboy should be keen to take any cues from the player or coach to take the water in. A good Waterboy saves the player the hassle of coming to the sideline to get the water.

This consistent and quick provision of hydration will allow the player to focus better on the match and increase the chances of a victory.

The task is rather simple, but the payout is huge. According to stack.com, the average salary for an NFL waterboy is $53000 per year. The sum may be smaller if you are an intern or a volunteer.

However, full-time towel boys and water boys are considered part of the training staff, so they are paid.

You might even get an NFL gold ring since the team is given 150 rings to distribute to everyone who took part in their victory.

The towel boys and waterboys mostly get the $50 band which has no stones on it but is still a good souvenir to keep.

A Waterboy position will be a good way to meet players, learn some new tricks along the way, and network with officials.

How To Get A Job In Sports

Sports pay well even for those who are not athletes, but they play some role in sports. Leagues like the NFL, the NBA, UEFA, and others pay their officials, coaches, and other staff a lot of money to keep everything running smoothly.

There are many job openings, and here are some general steps you can take to get an opportunity to work in sports.

After all, work on your resume and send it to the desired sports group, and you will get the job you want.

Being A Professional Football Coach

Many positions could come to you in the NFL if you have the proper skill set. One of these is the coaching job which carries a lot of weight and pays a lot of money.

You could be a retired player, want to coach, or already a coach, and want to go to the NFL. Here is a guide on how to make your dreams come true;

Coaches have to work irregular hours, and the career has become challenging over the years. The job requires a bachelor’s degree, but the starting salary is not that high.

However, as you progress in the field, you will get higher-paying opportunities. The demand for coaches is based on the experience they have.

You will be better off starting as a high school or college football coach to build a reputation and grow your arsenal before going to the big leagues.

Prior experience is not needed for employment, but the salary will change depending on how experienced you are in coaching.

More experienced coaches will often be considered for bigger jobs, and they will get more money.

The coaching job is very demanding, and there are many slots all over the US. Football coaches are also one of the highest-paid public employees in the United States.

With thousands of open jobs and a high salary, this seems like a good choice for you. There are several levels of football coaching that are divided in terms of athlete age and levels.

Here coaches give high-level strategies to players and help out with scouting reports for professional football.

There could be over eight coaching positions in a single professional team, with each coach specializing in a given aspect of the game.

You can specialize in more aspects of offense and defense coaching to increase your experience level.

You can become an NFL Waterboy by writing an application for the position to a team in the NFL or the NFL itself. Another way is to ask an official or coach you know to get you an opening in one of the teams.

The Waterboy is an important part of the support staff, and they should always be vigilant to do their job whenever needed. Being a Waterboy is a job that pays well in the NFL, and you can get as much as $53000 annually.

There are countless other job opportunities besides being a player; you could be a coach, an agent, a referee, a linesman, etc.

Coaching jobs for professional football require a Bachelor’s degree, but it will be very satisfying once you get the job.

Are Vans Non-slip? Things You Need To Know About This Shoe Brand