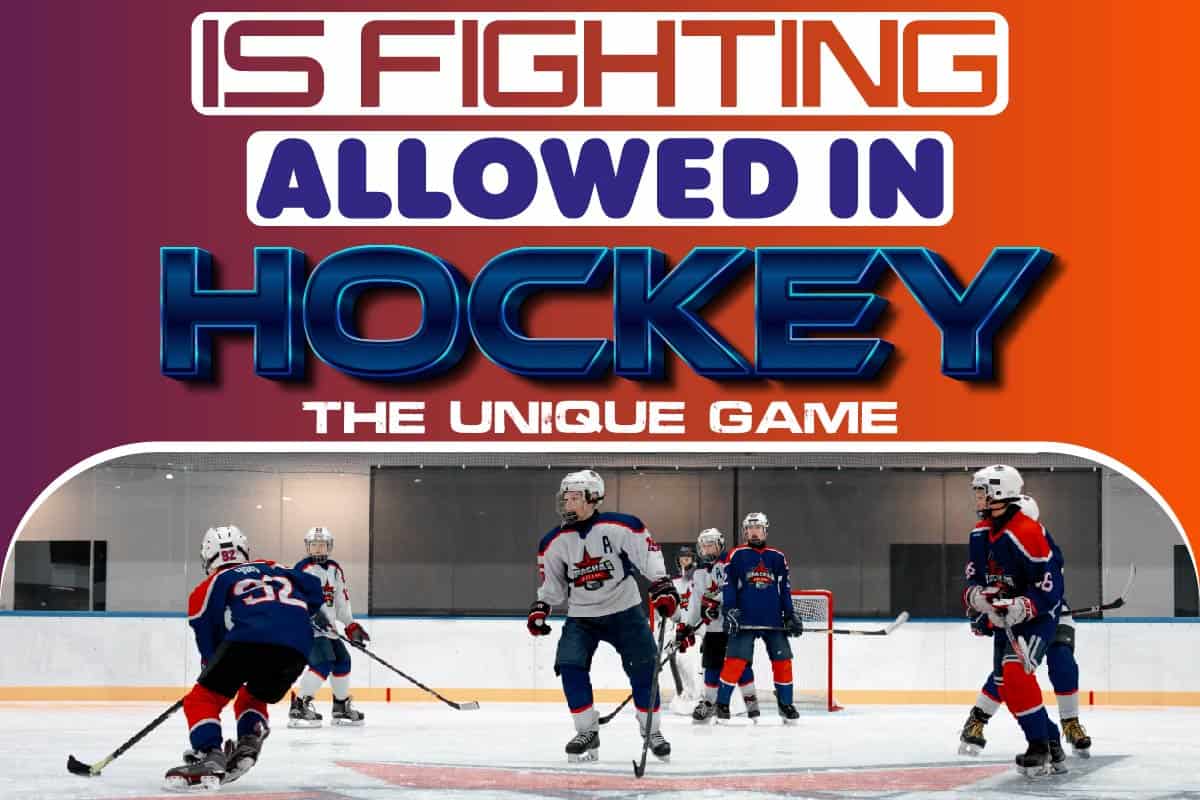 The hockey players are known to be amongst the most formidable athletes out there. Most times, they get basted in their faces with the puck but keep playing. This is an important stage in life and the stages of learning. The point is, is no matter the pain you may face, keep moving forward.

Of all the big leagues, the NHL has a record of most fights. At times the hockey night games can feel like fight nights.

This averages to about 0.3 fights in a single game. Fighting has always been a part of hockey since the very formation of the leagues. So, let’s find out.

Is Fighting Allowed in Hockey

Yes. Fighting is allowed in hockey because it brings out a different element to the game. This is something that other major sports in the USA lack. It’s the only major league in the US that allows fighting. Funny, it has been written in the rule book.

In recent years the fans have felt like fighting is unnecessary. They have been questioning the main motive behind this rule in the game.

However, there are several great arguments, both in support and against the rule in the National Hockey League.

We shall go into finer details in the following sections of the article. Keep reading the article to be well informed about the game of hockey and its crazy rules.

The Amazing History Of Fighting In Hockey

The hockey league was founded in 1917. Since then, fighting has been a part of the game. In the early years, it was so severe that the league officials had to formulate a rule. This was to help regulate the number of fights in the game.

In 1922, the official rule on fighting was that any player involved in a fight would be subject to a five-minute major penalty.

However, the rule was still in support of fighting in some way. The best way to control fighting would be by automatically removing the player from the field.

But the addition of the five-minute rule did reduce the number of fights in the game. Fighting became so rare during the 1920s to 1960s.

The fighting cases became quite rampant again in the ’70s and ’80s. It increased by almost a hundred percent, meaning at least one fight would be recorded in each game.

According to the rule, it’s a fight when one player attempts to throw a punch at the opponent severally or a player punches the opponent.

In another case, scenario fighting can be when the duo fight in a manner that is so difficult for the linesman to stop.

The great thing is that the referees have an array of penalties. They can all be imposed under the fighting rule. The penalties have been intentionally set.

It helps to differentiate between intentional and unintentional fights. However, the referees are expected to be so keen and realistic when administering the penalties.

In hockey, the fights mainly involve two players. Various alterations always start the battles. It can be a hit on another team’s superstar.

At times it’s always about bad blood. There are just many causes of fights in hockey.

During fights or when fights begin, the players are not allowed to take off their helmets. By doing so, they’ll receive a minor penalty and unsportsmanlike conduct penalty.

Once the referee is sure there will be a fight, they stop the game and let the two players fight. The contest automatically ends when one of the fighting players hits the ice.

Facts In Favor Of Fighting In NHL (Pros)

People love to watch hockey fights. The majority of the fans have opposed the fight ban. They believe that the on-ice scuffles are the better part of the game. To them, it’s more entertaining at the pro level.

It’s funny that some fans go to the hockey games to witness the fights and the big hits. They add a layer of extreme entertainment to the game that no other sport has.

The hockey fights are available and mainly shown on ESPN. They get millions of views on YouTube. The brawls do increase the fans’ attendance.

Plus, the fights help the game and leagues to stand out from other major leagues in the United States. It keeps the fan talking for weeks and weeks. Turning the NFL into a non-contact game will reduce its sales. The game is still growing.

On accountability, I think the fights are as effective. Through the fights, a player is held accountable for specific actions. This leads to reduced retaliation type plays.

A quick example, if a player hits the star player of the opponent team, the team will usually send an enforcer to pay back.

The player who made the initial hit on the star player always knows this will happen. You should note that hockey players do not fight because they love violence.

In the game, the players constantly police themselves. If you see any fight, know it’s a response. Someone did not like what was done to him in the game. The fights are healthy and should be kept.

The good thing is the fight between players helps reduce pressure and settles things. The players tend to desist from making bad hits that will lead to more fights. Therefore fewer cheap shots are always taken.

Another thing is that professional hockey games are always so quick. Many times the referees miss out on illegal body checking and other aggressive plays like stick hits.

The retaliations, which are fights, help expose such dirt and bring accountability. This prevents and reduces dangerous plays.

This, in turn, prevents further injuries in the game. The hockey play is always so fast, intensely physical and emotional,

In a 2012 survey, 98% of the players were against the ban of fights in the game. Fighting is a thing that has been in the game since its creation. Right now, it’s in the NHL rule book.

It’s rule 56, and it does allow fighting in the game. Many players and fans believe that changing a tradition that has been in play for almost 100 years will spoil the fun. The effect will be so drastic to the game.

Fighting in hockey is an unwritten rule and code. However, it’s said that the code does dictate who should fight and who should not.  The players have learned how to go through the fights and still adhere to the code of conduct.

Another fact is that fights are always so less during the post-season. At this time, the teams are always so focused on winning the league. This is a clear show that the players are keen and adhere to the unwritten code.

Fighting does give hockey some personality, grit, and edge. It brings out the rivalry feeling that analysts and fans love.

The Facts Against Fighting In NFL (Cons)

Today’s hockey has evolved. It’s stronger, faster, and advanced. Such things make fighting bad and should thus be regulated. Here are some of the reasons why the fight isn’t great.

Hockey fights cause about 10% of concussions recorded in hockey. The fights also lead to long-term health conditions.

It raises the cases of head injuries which in turn lead to incidences of personal tragedy.  The heavy use of pain medication often leads to addiction which increases the possibilities of depression.

It Sets Bad Example for Minors

Fighting is banned in the youth league. However, this is not enough. The fighting at the professional level acts as a bad influence on these kids.

Usually, they imitate the tactic and fights that the senior professional players use. This can be termed as both illegal and legal.

The damages caused by fighting can be pretty severe to the young players. It’s because their brains are not well developed.

They are also so open to brain and spine injuries. In more youthful players, these concussions can have a permanent effect on them. The result might not be recognized until they are grown.

The youth league’s young players emulate most of what is done at the major hockey league. The children tend to idolize them.

Fighting has been a thing in hockey since its formation. As mentioned, it was so rampant during the ’80s and ’90s. Today it is allowed by the NFL rules.

Today, however, the officials are trying hard to regulate and reduce the fights. It’s because today’s game has evolved. It is more technical and fast than before.

However, the fights are what many fans love in the game. It gives it some edge compared to other games. The fights do also have adverse effects on the players, such as injuries and many more.

Is Pedigree Good For Dogs? Read This Before Making Buying Decision