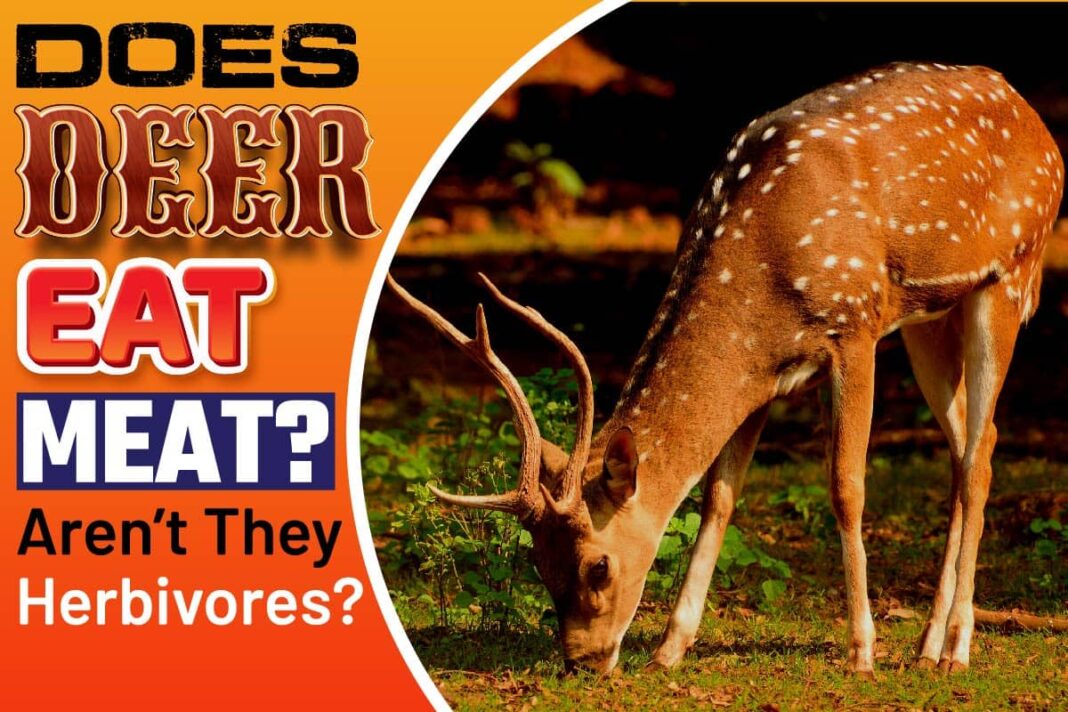 Would you believe us if we told you that many people believe that deers are omnivores? Well, yes, many have the idea that Bambi could have eaten Thumper if he wanted to.

Many even claim that they have seen deers eating pieces of meat. And when the other people hear about it, they will believe that the buck was probably too hungry and eat whatever he found in front of him.

For this theory, the question of does deer eat meat has been quite a popular one. And we are here to take a deeper dive into the topic and learn the truth. So, stick to the end of this article to learn all about it.

What Do Herbivore, Carnivore, and Omnivore mean?

You might be pretty familiar with the term herbivore. It basically states that animal is getting all of its energy from eating herbs and only herbs. And by herbs, we are basically referring to plants.

Omnivores, on the other hand, can eat both plants and meats. That means they will eat meat if they wanted to and plants if they felt like having them. And a proper example of an omnivore animal would be us, humans.

On that note, because of the usual eating habits of deers, they are generally considered herbivores. But there are some things that will make you think otherwise. To know what we are talking about, you need to continue reading.

Now that you are pretty familiar with the terms let us get into describing the thing that you are actually here for. Deers are generally categorized as ruminants because of their eating habits. Now, what does that mean? It basically means that they eat plants and ferment them in the stomach before it gets totally digested.

Additionally, ruminant animals have a specialized organ in the digestion system. That allows them to digest the toughest plants that humans would not think of chewing. In other words, the plant-based foods that are not that easy to digest for humans will be totally edible for ruminant animals.

You might be wondering that an animal with a specialized organ just for eating plant-based food would never eat meat, right? Well, you are a bit wrong in this theory. Deers can sometimes eat meat. Yes, you read that right! These ruminant animals can be steak-seeking predators sometimes.

However, they do not bear the natural instinct for hunting. That is what the carnivores have, like lions and tigers. Instead of going out hunting the big games, deers target the smaller ones. And their targets are usually highly vulnerable animals and cannot defend themselves.

Now, which animals do they actually eat? Well, there are plenty of incidents that hunters notice. In those, they noticed bucks and stags eating hatchlings of birds. Sometimes, they will even eat a whole egg, albeit the eggs they eat are small and are from birds.

After many of the hunters claimed that they have watched deers eat meat, scientists came to the field. In one of the experiments, they set up cameras in different places where deers usually came for food and watched them from a distance.

In one of those experiments, the camera caught deers snatching up the harmless nestlings from the nests. However, the experiment was not all about deers; it was basically about a group of ornithologists on a mission to study the behavior of adult birds.

That being said, the incident took place when the deers found the birds in a highly vulnerable state. As the scientists traped the birds by gently draping the mist-nets between the trees, a herd of deer came into the scene. The herd walked right on the birds, and some of them even started eating them.

When people hear about this incident, the first thing that comes into their minds is that the herd might be of a specific type of deers, and the others might not eat meat like this herd. Well, another incident occurred, and it was not about the same species of deers.

There is a documentary available about red deers feasting on the seabird chicks. In that documentary, the biologists explained that the deers were just boosting their diet by adding some supplementary nutrients.

Also, in that exact documentary, you will find him documenting a sheep going right ahead and eating the heads and legs of a seabird chick. Hard to believe, is not it? Well, these are not the only incidents where the animals that we believe are herbivores are eating meats. There are plenty of other documented incidents too.

The Meat Eating Habits Of Deer

If you think you were not shocked enough after learning about the incidents where the deers and other herbivores ate meat, let us give a little bit more insight into the meat-eating habits of these animals.

In the previous segment, we talked about deers eating harmless and highly vulnerable birds. These birds were small in size, and deers could just easily chomp on them. However, what we told you that there are proofs that these animals went ahead and ate fresh meat? Yes! There are incidents such as that too.

As weird as it might sound, even though deers are considered total herbivores, they can feast on rabbits and squirrels. And we know what you are thinking at this moment. Bambi could also have dined on Thumper as well. But his diet was totally okay, and he did not need any boost on a diet.

Additionally, you might be surprised to know that many of the hunters spotted bucks and stags eating on the flesh of dead animals. However, those incidents basically included dead fishes that drifted to the shore. But the most shocking incident included a deer feasting on the guts of other dead deer.

That being said, due to the structure of the organs, deers are not really equipped to eat meats. Also, their teeth are not that capable of biting through the thick skins. For that reason, the options of a deer in terms of eating meat are pretty limited. That is why they would generally eat the flesh that is soft and easy to chew.

Even though we might have given you a little hint at why people think that the deers eat meats, there is so much to it. And that is what we are going to explain in the next segment.

Why Do Deers Eat Meat?

After knowing about deers’ incidents and meat-eating habits, a question might be revolving around your head. That is — why do deers eat meat in the first place?

Well, right after the incidents of the deer acting like an omnivore and cannibal at some points, the researchers got into the field. They started to monitor the diets of the animal and tried to explain such behavior.

While researching, they found out plenty of things. However, none of them could really get to the end of this. The explanations that most gave were pretty much vague and did not actually explain why these herbivores act wild sometimes.

That being said, there are plenty of speculations around it. Many of the scientists gave the explanation that deers that eat meats are lacking in salt, calcium, and phosphorus. And some of them might even have iron deficiency. The smell of the blood triggered them, which led them to eat the meat.

Nonetheless, if the theory of iron deficiency is accurate, we would have spotted the deers licking the salty rocks that are on the field. But the scientists explained that the smell of blood is stronger than the smell of salty rocks on the field. That is why they would get spotted eating soft pieces of meat.

But if that theory were true, we would not see the deers eating big pieces of meat. So, the answer is still unknown, and to know the exact answer, more research is needed. Instead of just speculating, we need to monitor their entire diet and see at what point a deer thinks of eating birds and pieces of meat.

To sum things up, in short, the answer to does deer eat meat or not is a yes. They can sometimes eat small birds and small pieces of meat. But if we were to answer the reason, there is not much information available. It is widely believed that the ones that do eat meats lack calcium and iron.

Does Basketball Make You Taller? Here Is The Shocking Truth

Check Out How To Send More Than 10 Messages At A...