Can You Reuse Stamps? Check Out The Answer 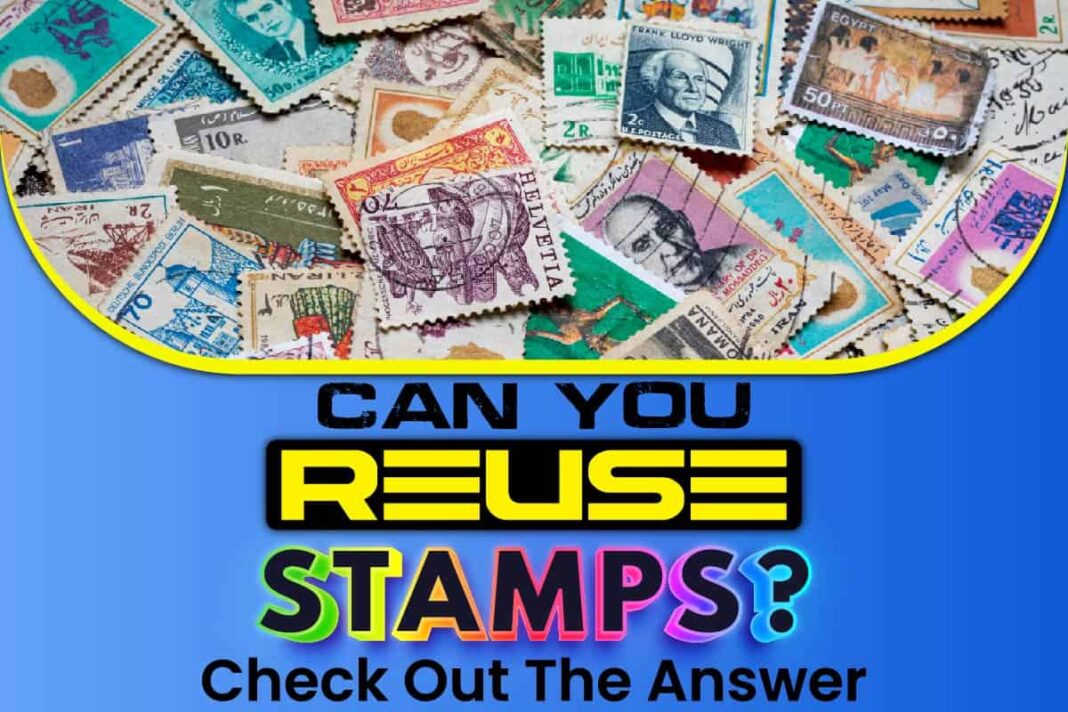 Stamps are tiny pieces of paper that are attached to one’s mail. A stamp on a mail indicates that one has paid for the postage. Now, without these stamps, it is impossible to mail your letters.

Also, every mail goes through some basic processes before it is delivered. Usually, mails pass through a sorting machine, called the cancellation process. And what the sorting machine does is leave some logo pasted on the stamp.

In most cases, however, the sorting machine may skip pasting the logos on some stamps.

Can You Reuse Stamps

No, you cannot reuse stamps. It is against postal regulations to do so. Hence, it is a federal crime to reuse stamps.

As long as a mail has gone through the USPS, it becomes an offense if reused. Even in cases where one has not canceled the stamp, its use is unacceptable.

However, this rule doesn’t apply to letters that haven’t gone through the USPS. For example, if you put a stamp on an envelope without sending the mail, you should be able to use it again.

You can carefully take the stamp off the envelope. Alternatively, you could leave it in the envelope and use it whenever the need arises.

Continue reading for more information on this topic.

Will You Get Arrested For Reusing Stamps

Most actions appear too little to name them as a crime. But the fact remains that reusing stamps is a crime. And every crime is punishable under the law. So, if you’re guilty of this crime, you’re going to be penalized.

However, the chances of being criminally prosecuted for this type of behavior are slim. Usually, letters with reused stamps are returned to the sender, or the recipient may have to pay. However, one needs to purchase a new stamp.

But this won’t be the case if someone acts in this manner repeatedly. Also, some people sell used stamps to innocent buyers. For a situation like this, the penalty is usually high.

Now, depending on the crime degree, defaulters may be asked to pay a fine of $10,000. However, some defaulters may face a 5year prison term. In a more difficult situation, a defaulter may have to do both.

For example, most people are guilty of photocopying stamps onto the corrected paper. If, however, it is perforated for personal use and in small quantities, they would face a reduced penalty.

However, if the fraud was wholesale and widespread, the penalty can be significant. The defaulter will be required to pay a fine and face a jail term.

What Happens If You Send A Mail Without A Stamp?

Just as we stated earlier, stamps are essential for sending mails. However, there are cases where letters get sent to the USPS without stamps.

In such a scenario, the mail gets returned to the sender. Or, most times, the receiver would have to pay for the stamp. So, stamps are essential to your letters.

Can I Use Old Stamps

Stamps are valid as long as they’re yet to go through the post office. Old stamps can become validated as legitimate postage. Additionally, the stamp nerve expires. Even with the daily increasing postage rates.

However, old stamps also get rejected sometimes. So, your stamp needs to pass the legitimate postage process to be accepted.

How Can My Stamp Pass The Legitimate Postage Process

For your stamp to avoid rejection, the borders must not be damaged or torn. So, if this is the case, the sorting machine may not identify the stamp. However, a minor tear won’t make a stamp to become invalid. But, whereas the incision consumes more than a portion, you should replace the stamp.

Again, avoid gluing or using tapes over your stamp. If the initial glue of the stamp has grown weak, you should consider getting a new one.

You also have to make that the price/value of the stamp isn’t blurred, smeared, or covered. If it is, it may be difficult for the sorting machine to identify.

Can I Use Money In Place Of Stamps

The simple answer to this question is – Yes! It may seem weird, but it’s a thousand times better than reusing stamps. Plus, it is a welcomed action in the U.S.

However, the money to be attached should be equivalent to the value of the required postage. Again, you can also do a hybrid of this. Let’s say perhaps you need two stamps and you have just one. You can attach the stamp you have together with the money to cover up for the other.

When the mail gets to the post office, a stamp would be attached to it. And afterward, it is sent to the sorting machine.

How Many Stamps Should I Use For A Mail?

There are times you may be required to use two or more stamps to mail a letter. However, this depends on the weight of a letter. Generally, you should use two stamps for mailing large envelopes or packages.

For example, use two stamps when mailing a letter weighing more than 1 ounce. Similarly, it will take two stamps to ship a 1-ounce weight if you’re using a regular first-class stamp.

However, you will need seven standard stamps for a package weighing 13 ounces. However, you should avoid using two forever stamps on one’s mail. Doing this would mean paying for an item that should cost only $0.70.

Where Can I Get Real Stamps

So many people have fallen prey to purchasing used stamps. But please remember that you can get stamps from the post office. However, some retail shops sell as well. However, it would make great sense if you were sure you got yours from a reputable retailer.

Below are some places where you should consider getting your stamps;

How Can I Get a Stamp off An Envelope

However, if you’re going to go through it, ensure the stamp hasn’t gone through the post office.

To get a stamp off an envelope, the first thing you need to do is fill a bowl with water. Then, put the stamps in the water. Allow them to soak for at least an hour. You’ll notice the stamps separated from the envelopes. Then, you can peel them off.

Alternatively, you can soak them longer. The longer you soak it, the clearer it becomes.

The Various Types Of Stamps

You can use an Airmail stamp for payment of airmail service. The stamp has images of airplanes on it. Some may even have pictures of famous pilots.

Certified stamps are like mailing receipts. They are the sender’s prove of mailing. However, it is only available for First Class Mail and Priority Mail letters. Every certified mail comes with its label number. The number is an official record that the postal service mailed an item.

Commemorative stamps are sold privately at auctions and on the internet. Unlike other stamps, they have limited production. And, they get sold for only a year.

These are the most commonly used stamps. They are the ones you use for standard postage charges. Unlike commemorative stamps, they get issued year after year. Additionally, its production isn’t limited.

The USPS introduced the forever stamps in 2007. As its name implies, you can use the forever stamps to mail a one-ounce letter irrespective of when the stamps are purchased or used. Again, it isn’t affected by the future price change. However, they get used on standard-size envelopes weighing 1 ounce or less. They are also called permanent or non-denominated postage stamps.

The postage due denotes that you have not paid for full postage yet. Usually, you’ll find the amount owed indicated on it.

The USPS sells Semi-postal stamps. They sell it at a premium to fund a cause. A portion of the amount realized goes to the federal agency designated to administer the funds.

The stamp is an essential requirement for every letter. And, it is best if you use it only once.

Every mail goes through the mail processing center. When you mail a letter, it passes through the canceling machine. A logo or postmark appears across the stamp.

Most of the letters, however, may come out without being physically canceled. However, the canceling machine automatically rejects a reused stamp.

Reusing stamps is equal to stealing. So, whether the stamp was canceled or not, reusing it is an offense. It is therefore considered a crime to reuse a stamp that has gone through the USPS.

Check Out How To Send More Than 10 Messages At A...