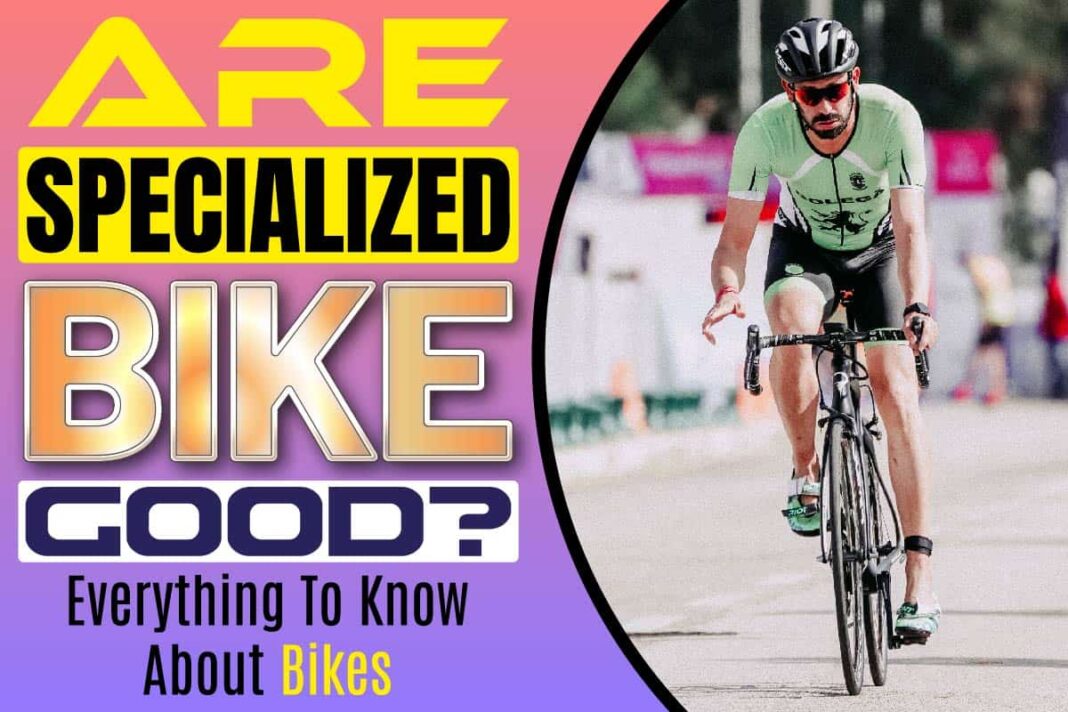 When thinking of engaging in a fun sporting activity, cycling must be on the list. Cycling requires you to be comfortable with the bike you are using.

For maximum comfort, the bike needs to have all the features a rider requires.

Today, Specialized Bikes is the leading company in manufacturing bikes in the US, closely competing with Giant Bicycles and Trek Bicycle Corporation.

Specialized bikes are of high quality and are made by riders for riders.

Yes, specialized bikes are good as they provide high-quality bikes. These bikes have been manufactured to cater to both amateur riders and professional riders.

Specialized bikes have a state-of-the-art suspension system that manages a rider’s level of control. Most rider features in these bikes make them desirable due to their high performance on even and uneven terrains.

For many years specialized bikes have been the go-to bikes for many people even though they are expensive. Their popularity in producing high-end bikes has given them a global reputation and respected brand.

Mike Sinyard founded specialized Bikes in 1974. Being a cycling enthusiast, Sinyard sold his car to fund a cycling tour to Europe, where he bought stems and handlebars to use in the US.

Mike Sinyard started by importing bike components that were hard to find in the US from Italy. The company began to manufacture its parts in 1976.

The first bike part to ever be manufactured by the company was the specialized touring tire.

The Allez and Sequoia were the first two bikes to be introduced by the company in 1981. The company also introduced mountain bikes’ primary production during the same year, a pioneer in the biking world that many would follow.

In 1989, the company introduced the second mass production of carbon fiber mountain bikes.

Over the years, it has continued to make advancements in its bike production. The company has a competitive edge and is a preference for many world-class bikers.

Reasons Why Specialized Bikes Are So popular

If you are close to any cycling enthusiast, you will probably know what they look for in bikes. So if the specialized Bikes are so popular, they have some features that users appreciate. Let us look at exactly what features make it so popular;

1. Components are made with precision with superior quality

The company is among the few that have adopted 3D printing in the cycling industry.

Such technology gives them increased accuracy in the parts they make to give the most comfortable feel possible.

The components used in specialized bikes are sourced worldwide, ensuring each part is of the highest quality.

2. Better for long-term use

With so much precision in construction, it is no surprise that riders can use the bikes for many years.

These bikes are built to last a lifetime if it is properly maintained and cared for. A cycle can only last long if it is used correctly and taken care of.

Specialized bikes have a cutting-edge design that has dominated the cycling industry. It is no surprise that bikers on specialized bikes perform better than those using any other brand.

The frame used in manufacturing the bike determines the angles and reach accessible to the cyclist. The Stumpjumper was their first mass-produced MTB frame.

The joins determine the posture of the rider. Specialized bikes have mixed up all these features and tailored frames to suit the needs of the rider. Their S-Works structure defines the Enduro frame segment used today.

Seat models promote blood flow since they make use of proven ergonomics. They mold footbeds and grips to maximize comfort and control.

All specialized products have a warranty of 2 years. This would be the case even if the original owner sold it before the expiry of the two years from the date of purchase.

This makes it more desirable than other bike manufacturing brands since it comes as an assurance of quality and shows trust in their product.

Specialized bikes are high end hence not everyone can be able to purchase these bikes.

Bikers who have had the privilege of riding these bikes have given good reviews, which prove that they are worth the money.

7. State of the art suspension system

A suspension system governs a cyclist’s control level and comfort when riding, especially in rocky terrain.

AUTOSAG tuning system automatically tunes the FSR (Future Shock Rear) to a rider at the press of a button. FSR is a crucial feature that helps make for the best rides even when the road is bumpy.

Now that you know what to look for in a bike, it is time to go into the market and get yourself one.

Specialized Bikes is one of the best bike companies in the US, and if you want the best of the best, here are some options you should consider;

Specialized Allez is an amateur bike that mainly consists of road bikes. Its frame consists of a full carbon front fork paired with an aluminum frame.

A forward and assertive ride posture is achieved when the reach is on the longer side paired with a low-height seat.

The bikes are flexible for inclines and straightaways due to the 8-speed drivetrain. Dual-pivot Tektro rim brakes provide good stopping power. The bike’s rear rack and mounts for fenders make it excellent for a day-to-day rider.

SL7 is a road bike designed for racing. It has a better performance than the Specialized Allez. The carbon fiber frame used in its manufacture makes it light in weight and efficient for aero stunts.

The nimbly handles on the bike are very responsive at high speeds. The rider is positioned in a tucked and forward posture to enhance the bike’s speed when cycling.

It is a bike mainly used for professional cycling at the Olympic level. It is built to handle the most challenging terrain. It gives the rider control, and the response to the landscape in real-time is lifesaving.

The cycling industry is big since people do it for many different reasons. Because of this, there are a dozen companies that produce bikes, and if Specialized Bikes don’t work for you, here are some options you can look at;

It is the biggest bicycle-making company in the US, with products ranging from kids’ bikes to professional bikes. Trek was founded in 1975 by Bevil Hogg and Dick Burke as a subsidiary of the Roth Corporation.

Trek is considerably cheaper than specialized bikes. The bikes offer high performance and outstanding durability. Trek’s bikes are bought more outside the US than any other brand bike.

The framesets from Trek Company are very attractive to the eye, strong, and light. Its bikes have storage compartments in the frames.

The frames allow riders to choose between small, medium, and large frames due to their alpha sizing.

Giant was established in Taiwan in 1972 with King Liu and his friends. It was the first company known for the mass production of a carbon road bike.

This company does not outsource its components. The company also is in charge of its manufacturing process from scratch to the final built product.

The company has an edge because it customizes its design, putting into consideration the female body.

The task of the company was to supply bike parts for cycling. In 1996, the first bike with the name Canyon was conceived.

The underlying carbon structure of the carbon frame makes it very visible in places. Carbon parts used to make these bikes do not have an unlimited lifespan.

In Canyon bikes, components made of carbon should be replaced at a regular interval. Canyon bikes are regarded as one of the bikes in terms of value options in the market.

SRAM was founded in 1987 as a single product company. It introduced the twist-shift to the road bike industry. SRAM quickly grew when the grip shift shifter technology was invented for mountain bikes in 1991.

Specialized bikes are suitable for anyone who wants to experience cycling on another level. These manufacturers have brought a competitive edge in the cycling industry. Most world-class Olympic cyclers advocate the use of bikes from this company.

The high popularity is brought about by the components’ high precision, giving these bikes the best overall performance. Though these bikes are pretty expensive, they offer a longer lifespan if properly maintained and cared for.