Is Train Hopping A Felony? Read This Before You Take Action 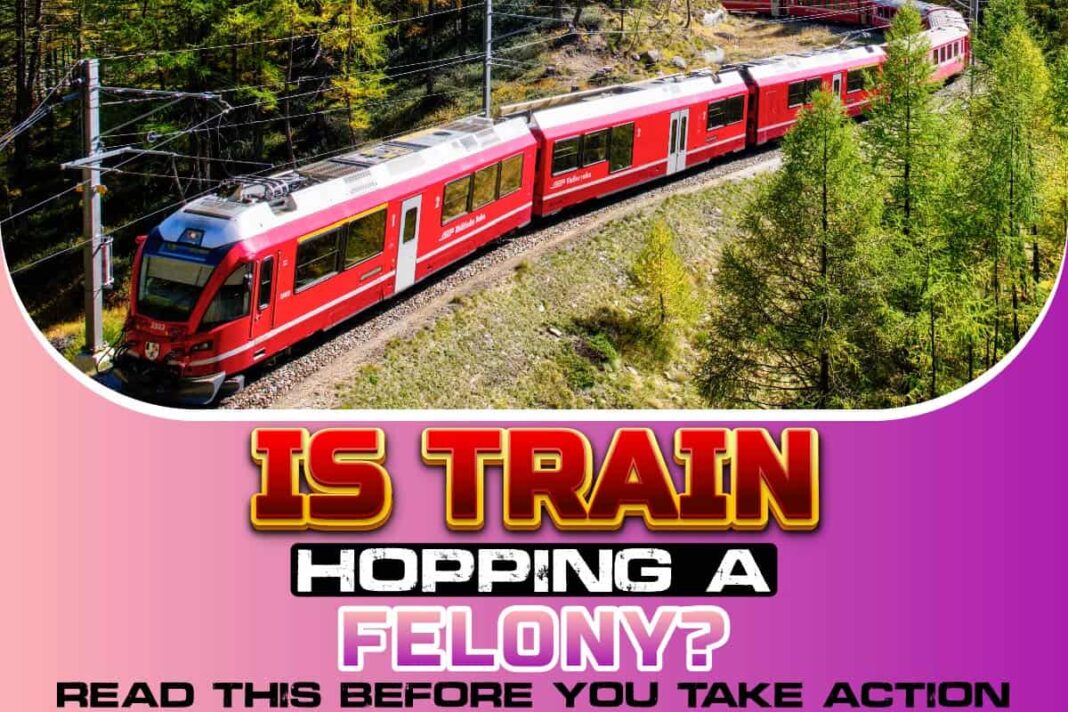 Why would anyone show a keen interest in train-hopping? Well, if you’re asking such a question, chances are you’re not an outdoor man.

Train hopping is fun and gives a similar feeling to hiking, mountain climbing, cycling, skating, and a range of outdoor activities. So it’s no surprise that many enjoy it, though train hopping isn’t so common these days.

So, why is train hopping not common? It’s simply because of the misinterpretation and perceived trouble one can land in.

Now, this takes us back to the question.

Is train hopping a felony? Here’s the answer

No, train-hopping is not a felony. However, it’s a misdemeanor in most states. It’s considered trespassing on railroad property. And can attract punishments of either a fine or spending a few days to weeks in jail.

Train hopping is also known as train hitching or “catching out.” It’s an act of boarding trains stealthily or in whatever manner that keeps you hidden. It’s also a means of traveling long distances for free. But it’s dangerous, and you may lose your life in the process.

The practice became popular in the United States during the Great Depression. The economic situation left many people jobless and having to travel many miles to find work. It was easier to ride the rails for free. Those who engage in this practice are known as “hobo.”

When talking about the risks associated with train-hopping, James Stobie comes to mind. Better known as Stobe the Hobo by his famous YouTube identity, James Stobie was dragged and crushed to death when a hopping attempt went wrong. He was smashed by an Amtrak train in 2017, November 9 to be precise.

So, train-hopping is a highly risky adventure. Something can go wrong, and one could be crushed to death at any second. Let’s discuss the difficulties, risks involved, and share some useful tips.

A significant risk associated with train-hopping comes from determining the train speed. The train speed is crucial because the inability to get it right can lead to death.

Most newbies try to catch a train or even jump off a train running super fast, a move that can end badly.

Calculating a train’s speed can be tricky when you’re far off. And that’s because trains are large.

So, a new or inexperienced hobo would have already started running next to the train before he realizes that. Such assumptions can lead to injuries or, worse still, death.

However, more experienced hobos avoid this situation by counting the bolts of the train wheels, which are three in number. They know the train is moving too fast if you can’t accurately count the three bolts on a wheel. That’s more like a speed check for getting on the train.

The bolt counting method can work well if you’re not carrying much weight. But if you’re, please endeavor to wait around or close to the train yard. That way, it would be easier to get on the train. And at that point, the train is hardly moving.

But it’s not. It’s much better to wait for the train to slow down or get to its next stop. Otherwise, you may end up badly hurt or dead. You can also jump when the train is moving at a speed at which you can run.

Another thing to consider when jumping off a train is how to land. You don’t want to land on your face or ass. It’s important to note that you’ll have lots of onward speed when you jump off the train. That’s why you have to be in a “running” motion when you hit the ground.

Ensure you’re not with any luggage or bag when jumping off. It could cause you to probably lose your balance as you land, leading to injuries. The best thing to do is to throw off your bag first before jumping off. You may have to walk back a few meters to get it, but it’s worth it.

You have to settle it in your mind never to get high while train hopping. It’ll help if you’re sober, as any misstep can lead to a disaster. It’ll also be best if you have a clear mind for something dangerous.

That doesn’t mean you can’t drink or do drugs anymore. It just means that you have to wait till you’re safely off the train and at your destination to do so. It may just be what keeps you alive while train hopping.

There’s a high risk of electrocution when train hopping, so be careful.

If you are on the train’s roof, be wary of AC power lines. Be attentive and keep your distance. Additionally, ensure you keep away from current collectors, electric catenaries, or dynamic brake resistors of trains.

Avoid riding on the train’s roof during a thunderstorm or when wet to avoid electrocution.

Because train hopping is illegal in most states, you have to worry about getting caught as a train hopper now and then. Keep in mind that you could be fined or arrested once caught.

Most times, when a hobo gets caught, the train yard security or “bull” usually gets him off the train. Though bulls don’t assault hobos, they may take drastic measures if you get violent or threaten them.

So make sure you don’t mess with bulls as they always have clubs, pepper spray, or even guns with them. Once busted, and they ask you to leave, do so quietly. Sometimes, they may give you a ticket for trespassing, and you’ll have to pay a fine of about $500 or more.

Worst still, you may get arrested and detained for a few days to weeks in some states.

However, if you want to avoid the security, don’t go into the train yard, as bulls guard the train yard. But if you must, do so at night only. They are less alert at night.

Slack on a moving train:

Another risk of train-hopping is slack. Sometimes, a car may get loose as your journey progresses, so any acceleration or slowdowns will give a violent jerk.

Such violent jerks may send you flying off the train if you’re standing at the doorway or on the porch of the boxcar. To be cautious, if you want to stand, always have three supports like two hands and a leg or a leg and two hands having a point of contact on the train car.

But don’t stand all the time. It’s best to sit down, as you’ll experience lots of unpredictable situations like obstacles on tracks, mechanical failure, and faulty car equipment.

Even so, be on alert and ready to lay low at cities or towns, railway crossings, or train yards. Else train workers or security may detect you.

Weather is usually an issue when train hopping. Seasonal changes like winter or summer can make it more difficult. For instance, the metals can be too hot during summer or too cold during winter.

Ordinarily, it’s not easy to grip metal for a long time. So, it’s even harder to grip or sit when the metal is too cold, hot, or even wet because of rainfall. However, it’ll help if you carry anything that can serve as an insulating material during such periods.

A bandana or cardboard can come in handy at such times. You can sit on cardboard to help with the cold or hot metal.

You can tie a bandana on a metal railing and grip it instead of the hot or cold metal. It can also be helpful when the freight train goes through a tunnel. To protect yourself from the toxic fumes that build up in tunnels, use a wet bandana to cover your nose and mouth.

Other Precautions For Train hopping

Train hopping is a misdemeanor in some states in the U.S. and comes with severe punishments, such as a fine or jail terms. However, the punishments vary according to state. So, you want to be on constant alert when train hopping in order not to get caught.

However, if you decide to ride the rails, bear in mind that it’s dangerous. That’s why you have to be cautious and implement safety measures. Always think before you act and be careful.