How Fast Is Lightning? Is Sound Slower Than Light? 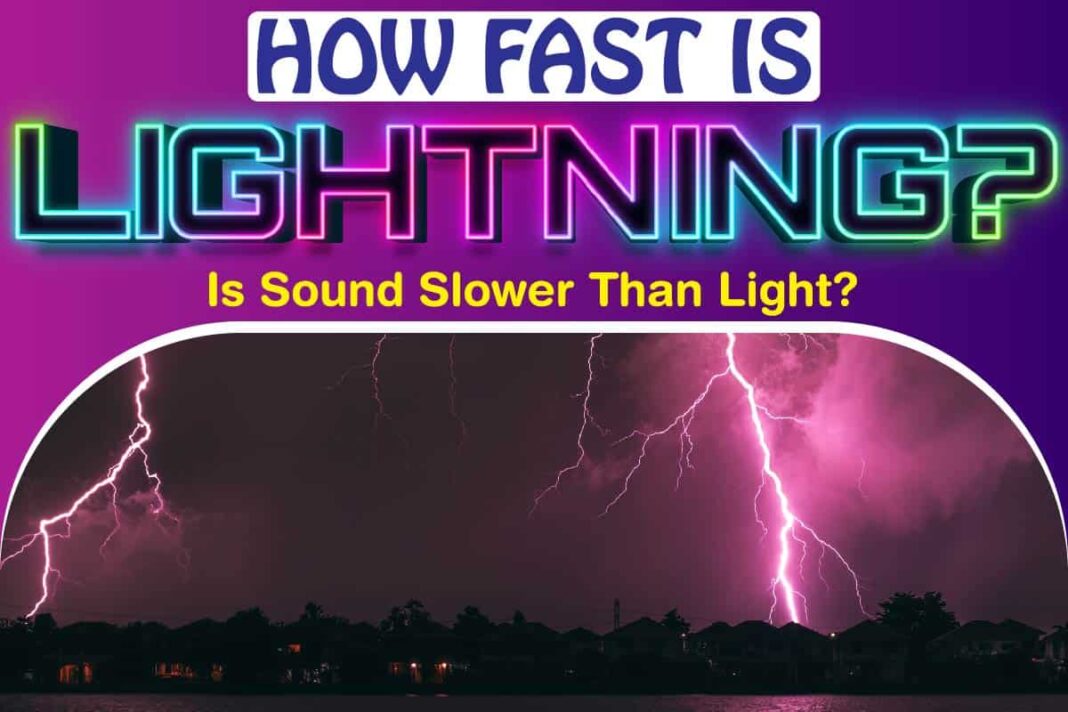 Ever wondered why do we see the flashes of lightning first and hear the sound after a while? Is it because the sound is getting blocked by anything?

We even had the same questions when we started to think about lighting one day.

Alongside those two questions, we also wanted to know how fast is lighting. Well,  that is where we started doing our research. Believe us; we got to know about a lot of stuff that was pretty mind-blowing.

And in this article, we will answer the question that you have in your mind. Additionally, we will also discuss some of the striking facts about lightning. So, prepare to get your mind blown.

What Is The Speed Of Lightning?

So, that means lightning is slower than light. But isn’t it just light? Yes, it is light. Doesn’t that mean it should have the same speed? Well, in theory, it should. But in reality, lightning usually consists of electrons. And these electrons get stripped from their molecules in the atmosphere. It happens while it is traveling.

As most of the electrons are stripped out, it loses speed. That is what makes it slower than light. However, the speed, which is 270 thousand mph, is not a small number. With that speed, it will be possible for you to travel to the moon in just 55 minutes. Yes! Under an hour!

Another example of its speed would be that it would take about 1.5 seconds to reach Bristol from London with that speed. In other words, even though it is slower than light, it is still exceptionally fast.

Are Lightning And Thunder The Same Thing?

Many confuse lightning with thunder. But they are actually not the same thing. Lightning is the flash that we see during rainfall and storms. And thunder is the sound it makes when it hits something.

And as you already know, lightning is pretty fast. It takes an exceptionally small amount of time for the tip of the bolt to travel from the very cloud and to the ground. But it takes the sound quite a while to travel.

If we were to compare, lightning has a speed of 270 thousand mph, while the speed of sound is about 1088 feet per second. That means the sound will take about five seconds to travel a mile.

On that note, this answers why we hear the thunder after the lightning and why they do not sync. The lightning will hit the ground first, and in the process, it will spread the surrounding with a flashing light. Once it hits the ground, the sound gets produced, which again travels slower than the light.

Another phenomenon that will explain this would be jet planes. If you have had the chance of watching any one of them flying above you, you might have noticed that they will first pass through the top of your head, and then you will hear the sound. This, again, is because the speed of sound is slower than light.

And you already know by now that everything is visible to us because of light. The light bounces off and reaches our eyes, which is why we are capable of seeing objects. For that reason, you see the plane first and then hear the sound.

Can We Measure How Far Away The Storm Is Using Lightning?

As we know the speed of lightning, it is surely possible to measure how far a storm is. But instead of using just the light, we will need to use its sound, which is thunder. As we have discussed above, lightning and thunder are not the same things.

That being said, you can measure where the lightning actually struck by keeping one thing in mind. That is the speed of the sound. It takes about five seconds to travel a mile. And thunder is created only when the lightning hits the ground.

Keeping those two things in mind, you can determine where the storm is. First, notice the lightning. Then, start counting right after you can see the flashes. Finally, make the calculations. If you can count up to 10 seconds, it means that the lightning struck 2 miles away from you.

Now, you might be asking how you will count accurately. Well, if you take the stopwatch out and start counting, you will be about 1 second off. That is why it is better to practice. Start by saying, “one thousand one, one thousand two” by keeping your eyes on the clock. Over time, you will get better at it.

Where Does Lightning Usually Hit? Are They Bad For The Trees?

It is a well-known fact that lightning will try to hit the tallest point. That means if you are the tallest point in an open field, there is a higher chance that it will hit you. For that reason, people warn you against staying out in the open when there is too much lightning occurring.

That being said, it is quite common for lightning to hit a tree. And when that happens, the stem usually breaks, and the tree falls to the ground. That means it is bad for the trees, right? Well, our mother nature is quite complicated. She has her own way of taking and giving.

Even though lightning can break large trees and end their life, it can help other plants grow as well. Plants require nitrogen to grow. And even though nitrogen is all around us, the plants REQUIRE a process named Nitrogen fixation to absorb nitrogen. And that is where the lightning comes into play.

For most of the time, the process will be initiated by the bacterias and algae. But when lightning hits the ground, the extreme heat can cause the nitrogen to bond properly with oxygen. And that would eventually produce nitrogen oxides.

Plants will absorb those oxides, and the rain will play a role in terms of making those oxides reach the roots of the plants. So, even though lightning can take a life away from the tree, it can help plenty of other ones around to grow and strive through tough environments.

Which Areas See The Most Lightning Strikes?

Among all of the locations of the world, areas such as the Lake Maracaibo of Venezuela and the Catatumbo river sees the most lightning strikes. In some cases, there will be several strikes within a single minute. It even made a record. The place has the highest number of strikes within one square kilometer.

On that note, that place even has the record of having the highest number of strikes in one minute. At certain times, 28 flashes of lightning can strike the place within a minute. That means if the storm lasts for an entire night, the place will have about 40 thousand lightings. Imagine trying to sleep after a tiring day if that happens.

Other than that, the country Malaysia sees a lot of lightning strikes as well. It is followed by Colombia and Indonesia.

How Does Lightning Creates Fulgurite?

There is a certain glass-like material known as fulgurite. And if you do not know what it is, it is basically grans of sand fused together. Can you guess what causes the fusion? Lightning! When lightning strikes on the beach or anywhere sandy, it will fuse the smaller grains, which gives us this glass-like tube.

These glass-like tubes hold a good amount of collector price. Many of the scientists even collect these to study the storms that took place in a certain area in the past.

Does Helicopters Cause Lightning?

Recent studies show evidence that helicopters can indeed cause lightning. Wondering how? Well, the data from the researches can answer that. When a helicopter flies, it achieves an overall negative charge.

In a nutshell, the answer for how fast is lightning is 270 thousand mph. It can travel to the moon within 55 minutes. And as the speed of the sound is comparatively lower, we first see the lightning and then hear the sound.

Peace Officers Vs. Police Officers: What Are The Differences And Similarities?