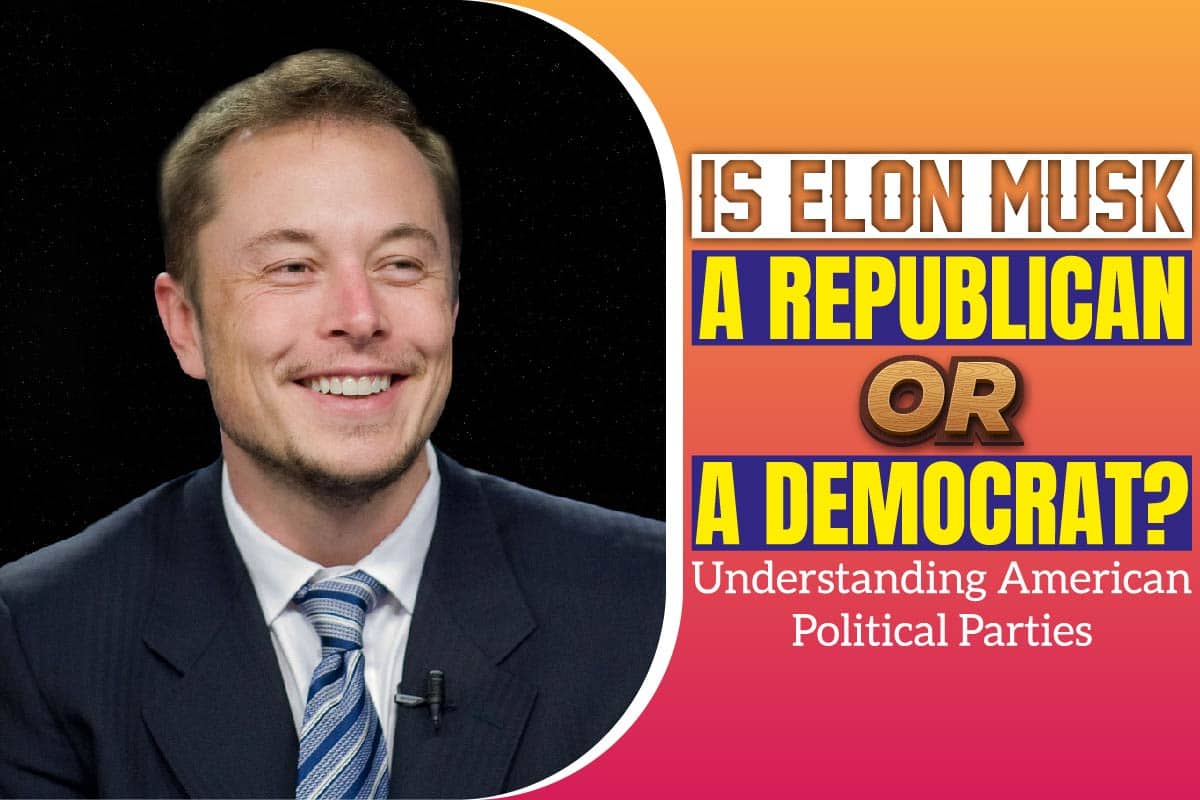 Elon Musk is a well-known businessman and environmental entrepreneur who is also one of the globe’s wealthiest people. Tesla Motors, SpaceX, PayPal, which he later sold, are his most well-known initiatives.

The Republican and Democratic are the two major political parties in the United States. The parties have some impactful differences from a political and policy perspective.

These two parties dominate America’s political scene, but their ideas and views are hugely distinctive. Let’s get a closer look and understand Elon Musk’s political views.

Is Elon Musk a Republican Or A Democrat?

Elon Musk is unattached with any political party. Elon Musk has given his money to members of both major US political parties. He claimed that he wanted it to retain an open debate.

However, he was a member of President Trump’s Strategic and Policy Forum until 2017. He resigned when Trump announced the US’s withdrawal from the Paris Climate Agreement. Despite all of the discussion about Elon Musk’s political views, he has rarely made any public statements on the subject.

One of Elon Musk’s Twitter followers stated that he was “openly socialist” after proposing a hypothetical settlement on Mars in early 2019.

Musk responded that he is “openly moderate,” in a rare instance of Musk making a political statement.

Musk has made several contributions to Republican candidates, prompting right-wingers to embrace the multibillionaire as one of their own.

A lot of people, on the other hand, were quick to label him a conservative. Nonetheless, he is eager to portray himself as a moderate.

He posted a statement on Twitter, “To be clear, I am not conservative,” in response to concerns that he was a Republican supporter.

He went on to say that he is an independent who is politically moderate, but that this does not mean he is mild on all topics.

You should note that Musk’s approach is not unusual among billionaires. When one of the political parties could theoretically be in power shortly, it is pointless to be at odds.

While supporters of both parties can argue Musk has financial ties to their respective parties, he appears to be keen on remaining unaligned and able to collaborate with anyone he sees fit.

What Does Democratic Mean?

Anything that resembles or has to do with democracy is referred to as “democratic.” It is a form of government in which citizens have the most power and executes it freely or through the politicians, they vote in to serve them.

In practice, this democracy is usually achieved through a transparent, well-organized electoral system whereby voters or delegates turn out to vote in support of politicians or changes in society.

As a result, the term democratic is applied to government entities that are or mirror democracies and also the people running them.

Citizens hold elections for representatives (members of Congress, governors, mayors, and so on) to execute and implement political demands on their behalf.

This is why the United States is referred to as a democratic nation or a nation with a democratic government.

What Does Republican Mean?

The term republican refers to things that mimic or involve a specific system of government, in this case, a republic.

A republic is a system of government in which citizens vote for candidates who, either directly or indirectly, exercise political power on their behalf.

You may have realized that a republic is similar to democracy. The bulk of today’s democracies are republics, including the United States.

However, note that not every republic is democratic, and all democratic countries are not a republic.

What Is Elon Musk’s Nationality?

Although Elon Musk was born into a mixed household in South Africa, he went to the United States without his family and became a full American citizen shortly after.

He is a dual national who works and lives in the United States. Elon Musk’s family history is fascinating.

Elon was abandoned by his father when he was a child – some reports claim he was only eight years old – and spent his boyhood reading comic novels.

After going on annual excursions with his father, Elon discovered that the globe was a prominent place full of excellent options.

He then decided to move to the United States at 15 because his father insisted that America was a land of self-made people.

Elon Musk has had his foot firmly planted in the international market since 1989. He’d gone to Canada and then to the United States, where he stayed in a dorm for international students.

He began his first business there and soon became a millionaire. He then made his alliance with the United States official.

Along with 3500 others, he took his oath for American citizenship at the Pomona Fairplex in a “very touching” event in the year 2002.

America, according to Elon Musk, is the land of opportunity. He argues that he could not have done it in any other country, whether he is an immigrant or not.

How Did Elon Musk Get Rich?

Elon Musk is a billionaire with a diverse investment portfolio that includes space, electric vehicles, and renewable energy.

He has several businesses, but his first significant gains came from the sale of PayPal.Tesla Motors, his electric car company, as well as Solar City have significant stock market worth. He is the CEO of SpaceX, a space technology business.

In 1995, he created Zip2, a company that connected marketers with users and provided “city trip guides” to newspapers.

When he first built the company, the businessman reportedly never left his office and later sold it to Compaq for a $22 million profit.

In 1999, he co-founded the payment startup X.com, which merged to form the well-known PayPal.

Musk was the only CEO for a year, but the company made millions of dollars despite that fact. Even after being removed as CEO, he remained the company’s largest stakeholder and profited $165 million after eBay purchased PayPal in 2002.

In 2002, the entrepreneur invested $100 million in a new company called SpaceX, with profits from his previous firms.

Musk is said that SpaceX’s overall purpose is to make the journey to Mars affordable. SpaceX builds rockets out of environmentally friendly materials.

In 2016, the reusable rocket known as Falcon 9 became the first of its kind to land in the ocean.

With Martin Eberhard, Musk co-founded Tesla, a luxury electric automotive company. He, later on, conducted a revolt and fired Martin Eberhard ultimately from the partnership.

With a market value of $206 billion in July 2020, Tesla eclipsed Toyota as the world’s most valuable automaker.

Musk gave his cousins the money they needed to start the solar energy startup Solar City in 2006.

Tesla later purchased the firm for $2.6 billion in 2016. His goal was to alter people’s perceptions of energy distribution. He envisioned a coordinated solar power system that would supply power to the entire city.

Does Elon Musk Give To charity?

Elon Musk is a huge supporter of philanthropy, yet it appears that he doesn’t put much money into his foundation’s website.

The Musk Foundation, a private grant-making organization, merely lists the five areas where he and his brother Kimal distribute money.

The Musk Foundation, according to their website, makes grants to the following areas:

Musk’s previous charitable contributions have been subtler. Musk was considering donating $100,000 to the Covid19 relief effort.

Over the years, remarkable donations totalling more than $54 million have been made to over 160 nonprofits. He, however, likes when his donations remain anonymous.

Additionally, your state may allow you to specify your political party affiliation on your voter registration card in a local general election. You are not required to vote for the party you are registered with.

However, depending on your state’s rules, you may be required to vote for the political party with which you’ve documented in a presidential primary or caucus.

Last but not least, while the words democratic and republican are capitalized in the names of the two American political parties, capitalized variations of these words have been employed in political organizations in other nations with very different ideas and agendas.

The French Republican Party and several Christian Democratic Parties around the world, for example, have no ties to American political parties.