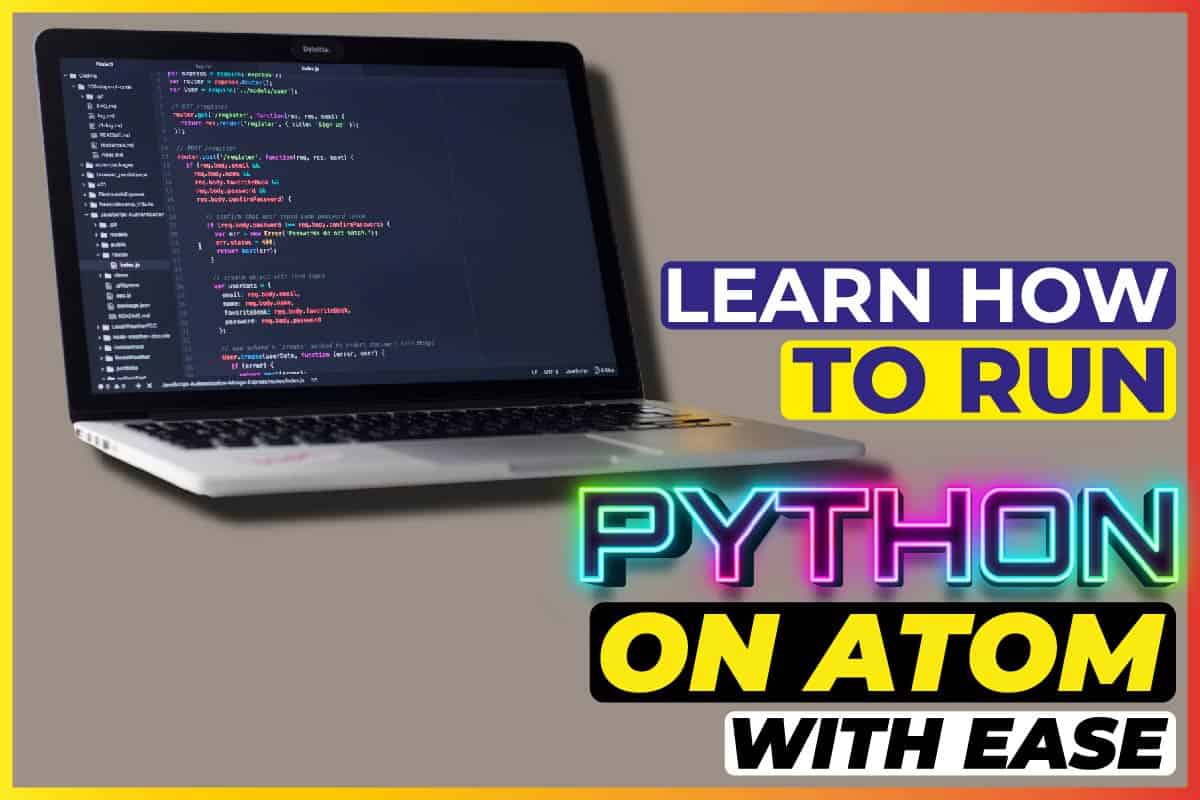 Python is useful for many applications such as web development, operating systems, mobile app development, machine learning, and AI.

Atom is an open-source text and code editor created by GitHub. Atom is cross-platform and supports packages written in various languages.

In data science, you will come across Python and Atom very often.

Now, the big question is, how do you run Python on Atom?

How To Run Python On Atom

This task might sound complicated, but you can get it done with careful application of the steps below. Follow the steps below to run Python on Atom.

The first step is to install and set up the atom package for Python. Atom is free and open-source. You can get the installation package on Atom’s official website.

Atom is cross-platform and supports many packages and languages. It can work on Windows, Linux, and Mac computers. You will find an extensive list of supported packages on Atom’s official website.

A Handy Tip: Remember to install the version that supports Node.js plugins.

There are tools you need to install to get the best out of Atom.

Your Atom interface also requires software called Script Package to help you run several variations of your code. You can run your code in snippets instead of running the entire code.

Other tools you should consider downloading are the Atom file icons package, syntax highlighting theme, and version control support.

You now have Atom installed on your computer along with the tools required. The next thing is to install Python.

Most Linux and Mac devices usually have Python pre-installed. Windows users will have to install the software.

Whichever be the case, if you do not have Python on your computer, the software is available on Python’s official site.

Note: If you use Windows, remember to add Python.exeon%PATH%.

Now you have downloaded and installed Python. The next thing is to execute the Python file in Atom.

Firstly, choose the directory for your Python files. To do this, click on ‘File’. From the options, select ‘Add Project Folder’. Set the root directory from the options on your browser window.

A directory tree structure should appear on the left panel. If it does not appear, click on ‘View’, and toggle it to ‘Switch Tree View’.

To create a new Python file, right-click on the folder. From the options, click on ‘New file’. Enter the code first_run.py. Then, update the file using print(*Running Python code in Atom*).

You have now installed Python and executed the file in Atom. You can go ahead and explore the wonders of Python.

But why is Python so popular? Continue reading for more information.

Work on Python began in the late 1980s. Guido van Rossum was the lead developer of this ambitious project at the Centrum Wiskunda & Informatica (CWI) in the Netherlands.

Python came as a successor to the ABC programming language. ABC had the exception handling feature and could interface with the Amoeba Operating Service.

Interestingly, Rossum was also part of the team that created the ABC programming language. Rossum loved ABC but wanted to make something better.

The need to make code more readable was the idea behind Python. With its syntax, developers express concepts using fewer lines of code.

So how did the name Python come about? Rossum was a keen follower of the BBC show “Monty Python’s Flying Circus”. His desire for a mysterious name for his project led to the choice of the word ‘Python.’

Rossum published the first Python code (version 0.9.0) in February 1991. It would take another three years for an update (Python 1.0) to emerge. The update carried new features such as filter, reduce, lambda and map.

Python 2.0 came in 2000 with more features like garbage collection systems and list comprehensions. This version came with support for Unicode.

Python 3.0 launched in December 2008 with the principal aim of correcting the flaws of the previous versions. The newest version of Python is called the 3.7.3.

We know that there several programming languages in use today. Is Python better than the others? In what way is it better? Continue reading to find out.

Big firms like Google, Spotify, and Netflix use Python for their programming needs. Surely this is no coincidence. Python must carry special advantages.

The Python programming language has some edge over the others. Let us consider some of them.

#1: Python’s syntax is simple and easy to comprehend

The syntax is straightforward. Python’s code is easy to understand and share. There is no verboseness with Python. Code readability improves a programmer’s productivity.

The language is also very easy to learn. Beginners can quickly get the hang of it in a very short while

#2: Python users have access to a vast array of tools and resources

Python code uses text editor or IDE, short for an integrated development environment. IDEs have lots of tools and features and tools that make the developer more efficient.

These tools include debuggers, code browsers, syntax checkers, etc. Python also has a vast assortment of third-party resources such as frameworks, libraries, and packages.

Modern operating systems all support Python. As a result, you can use it on any computer. Being a high-level language, it is interpretable across Microsoft, Linux, Mac, and UNIX without needing further adjustments.

Being a dynamic scripting language, then the aim of Python’s creators is not to write applications from scratch. The intention behind Python is to link together components with well-defined components.

Python is used for diverse projects. Developers can select between their object-oriented or procedural programming for their projects.

Python is also functional across the different data types. The five data types include number, string, list, tuple, and dictionary. Every sub-data type matches one of these main types.

Due to Python’s flexibility, data analysis becomes easier to carry out.

The Flaws Of Python As A Programming Language

Despite its many advantages, there are a few areas in Python that need improvement.

Python needs speed improvement. This may sound contradictory, as we have mentioned earlier that it helps developers work faster. Python’s speed currently lies in the simplicity of its code.

Python is slower than programming languages like Java and C. The reason is the Python code is an interpreted one other than a compiled code.

How You Can Improve Your Python Speed

You can make Python work faster for you. Here are a few tips.

Use a ‘speedup’ application. An example is Numba. This application enhances Python speed by implementing functions written directly in Python.

Use generators. Generators help to optimize memory. They enable you to create functions that can return items one by one instead of as a group.

Use keys when sorting. When you carry out sorting with keys, the key argument helps you arrange your items according to the selected index.

Use the latest versions of Python. New releases will be faster and more optimized than previous ones. However, ensure your supporting libraries are compatible with the latest update.

The Future Of Python

Perhaps you want to learn how to use Python and are concerned about its relevance in the future. You have nothing to worry about. From several indications, Python has a promising future.

Given its many advantages, the expectation is that Python will continue to be a leading programming language in the future.

Python is a general-purpose, high-level, interpreted programming language useful for many diverse applications. It is functional across all operating systems of modern computers.

To run Python on Atom, first, install Atom on your computer. Atom is free and open-source and is available on Atom’s official website.

Installing Atom is easy. Download the package of your choice and run the script. Several packages are available on Atom’s website. Download Atom for Python. Choose the version that supports Node.js.

The Python software is also available on Python’s official website. Download and install. Execute the file after choosing your root directory.

Python is simple, flexible, and portable. These advantages will continue to sustain its relevance in the future.

How To Remove Liquid Screen Protectors? A Detailed Guide

Here Is How To Receive Mail Without An Address