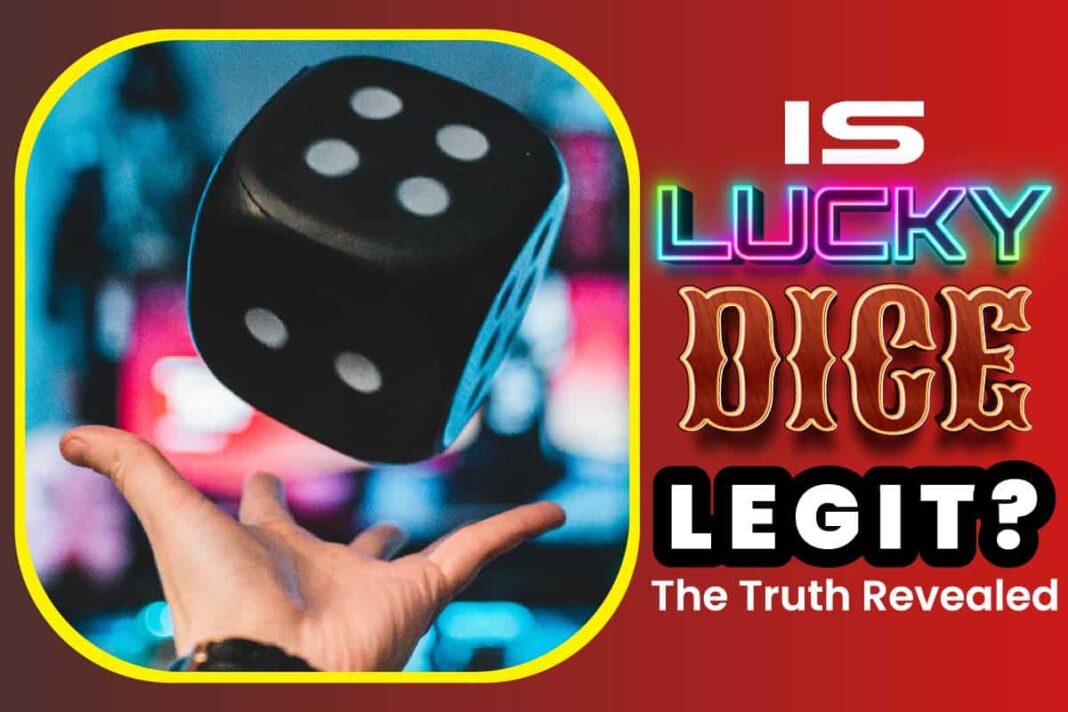 Before playing any game that offers rewards, it’s logical to find out if such a game is legit. Let’s look at Lucky Dice, for example. The board game has been around for a while, but questions about its genuineness linger.

There’s a lot of confusion out there over Lucky Dice’s genuineness. But it’s no surprise, given its popularity. It hurts to build rewards up to a certain level, only to have problems during withdrawal.

This leaves us with a huge question. The answer would clear any confusion or skepticism people have of Lucky Dice.

So, is Lucky Dice legit?

Well, yes and no. That’s the answer. No, if you’re seeking a free board game that’s simple to play and free. You’ll have loads of fun playing Lucky Dice. That’s the fact.

So, why do people claim it’s not legit? Here’s the second answer, which is yes. It’s hard to find someone who has withdrawn earnings from Lucky Dice.

You can only withdraw your money when you earn up to $100. That’s how Lucky Dice is. So, if your reason for playing the game is to earn some free bucks, you might end up disappointed. Why? You can’t claim your rewards or bonuses.

But, if your reason for playing Lucky Dice is to have fun, you’re never going to regret your decision. Besides, you’re not paying a dime to gain access. The app is free to access and use.

So, there you have it; the reason many claim Lucky Dice isn’t legit. There’s more, so we urge you to keep reading.

What Is Lucky Dice?

Generally, Lucky Dice means unexpected luck! You can roll a dice and get the number 6 on both dice. You didn’t expect it would turn out that way before playing the game. It just happened, and then you get your reward for being lucky.

The game, Lucky Dice, is a game of sheer luck. You don’t know the outcome until the result pops up. And what sets this game apart is its ease of playing. It doesn’t matter if it’s your first time.

You’ll understand how to play Lucky Dice in your first try and even go on to win things. Lucky Dice is also an upgraded board game designed to provide the highest level of entertainment of any online game.

How To Play Lucky Dice

The first action that you have to take is to download the app to your mobile device. It runs smoothly on the Android operating system. And you will find it on Google Play Store.

When you spin the dice, you’ll get a reward. Lucky Dice also allows users to earn rewards after performing other tasks, such as watching videos and so on.

But the most exciting part is that you’ll earn real money while having fun. The only major concern is cashing out.

The game is simple:

If you’re seeking an-easy-to-play game, Lucky Dice is a wise choice. The game involves rolling dice or a free spin. Excitingly, it is quite a breeze. Thus, you don’t need to rack your brain to understand a thing.

Some apps are massive, and thus, would occupy much space in a device. Lucky Dice isn’t like that. Thus, it won’t take up much space in your device.

If you’re seeking to earn real money playing a game you love, Lucky Dice is a wise choice. Plus, when you roll a dice and earn rewards, you’ll feel good, as though you earned the same in real life.

For people who don’t think they are lucky in life, playing Lucky Dice might be an excellent way to change that mentality.

Lucky Dice doesn’t just give players the chance to have fun. It also enables you to earn real money while playing a game you love.

Money earned gets credited to your account on the platform. So, you can track your earnings while playing.

Cashing out is an issue:

It’s okay that players earn money playing Lucky Dice. But what is most confusing and made people question the game’s genuineness is that people earn and can’t cash out.

Tons of complaints have been pouring in against the company, with many people claiming that they have been unable to cash out.

The game gets challenging as you go higher:

It’s normal for games to get more challenging when players progress from one stage to another. But Lucky Dice is entirely different. What made it so is that those behind the app don’t want players to hit the withdrawal threshold.

There are even cases of people that got stuck after earning $95 while playing the game. Some complain that they started experiencing glitches the moment they earned up to the amount mentioned above.

Now, let’s forget that cashing out is a challenge for Lucky Dice players. Do you have to pay a dime to gain access? No! You don’t. This makes Lucky Dice a great game.

One more thing you need to know about Lucky Dice is that your chances of earning decrease as you go higher. That’s why when players get to the $95.5 mark, they start finding it harder to earn more. You may not even have a chance to earn the remaining $5 to reach the cash-out threshold.

If your experience with Lucky Dice’s has made you lose interest in online games to earn real money, you have a compelling reason. The only concern is that you’re missing a lot of opportunities because of that experience.

So, if you did use Lucky Dice and felt scammed, don’t give up. We bring you Lucky Dice alternatives that pay the moment you hit the cash out limit. Check them out.

Number one on the list is Swagbucks. It’s a terrific Lucky Dice alternative, with tons of exciting games to get you glued to your device.

Upon signing up, Swagbucks offers you a $5 bonus. Sometimes, the bonus is $10. There’s also a referral bonus of $10.

Swagbuck’s Cash out limit is $25, and the app claims it has paid a whopping $530 million since inception.

If playing games and earning points and then real money isn’t your thing, but you want to earn online, try InboxDollars. You will fancy everything about this platform, from the professional-looking website to various ways to make money and more.

Upon signing up, InboxDollars gives you $5. Then, when you refer friends, you’ll receive $1. And that’s not all; you’ll also earn a whopping 30 percent of the lifetime earnings of each person you referred.

So, how does InboxDollars let you earn money? They offer paid surveys, paid TV, videos, including redeeming grocery and food coupons, etc.

If you want to earn money shopping or playing exciting games, Drop is your go-to app. But mind you, there’s no signup bonus. You’ll only get a referral bonus and meager cash out of $5.

How does Drop work? It’s simple. It lets you earn money when you make a purchase. The tasks include booking flights from Expedia to ordering your favorite meal at Postmates, and so on. Just link your bank card to the platform. That’s it.

When you make purchases and earn a bonus, they will be converted to gift cards when you make up to $25.

However, making purchases isn’t the only thing that will enable you to earn money. You can earn by playing games on the app too.

If you haven’t started taking advantage of Lucktastic, know that you’re missing something big time. Though signup and referral bonuses are $1 apiece, the Lucktastic cash out limit is only $5.

How does Lucktastic work? It’s simple. Players are given a digital scratch card, more like an actual scratch card. You have to scratch and match the cards. If you get it right, you’ll earn money.

What’s also quite enticing about this game is that players don’t have to invest a dime in it. Just play and earn. And actually, millionaires have emerged from Lucktastic.

Here goes another instant payment app that doesn’t joke. You earn, and QuickRewards pays. There’s no signup bonus, but rest assured that you’re going to earn something tangible when you refer your amazing friends.

Shockingly, QuickRewards has the lowest cashout limit so far, which is only $0.01 (a cent). The company pays users for surveys and games. Furthermore, QuickRewards also claims it boasts over 50 diverse options where people from the USA, UK, and Canada can earn money.

This platform offers you a $2 signup bonus. Anytime you refer a friend to FusionCash, you get $1, and when they initiate their first order, you’ll receive $2. Plus, when the referred friend cashes out each time, you’ll get $5.

So, FusionCash is one platform designed to help people earn real money. How? That’s what most people might be asking. Well, all they require you to do is watch videos.

You can also earn money on FusionCash by doing other tasks like playing games, pay-per-click, and others. Visit the site to learn more.

So, is Lucky Dice legit? Firstly, the definition of legit means the company or app is doing what it promises to do. For instance, if it promises to pay real money, it shouldn’t disappoint when players hit the cashout limit.

Unfortunately, Lucky Dice hasn’t been keeping to its promises. They even make it harder for players to make up to the cashout limit. Tons of people all over the internet have been complaining about the platform.

So, in general, if you’re considering earning online by performing diverse tasks, such as playing games, paid surveys, pay-per-click, watch videos, etc., you might not be so lucky with Lucky Dice.