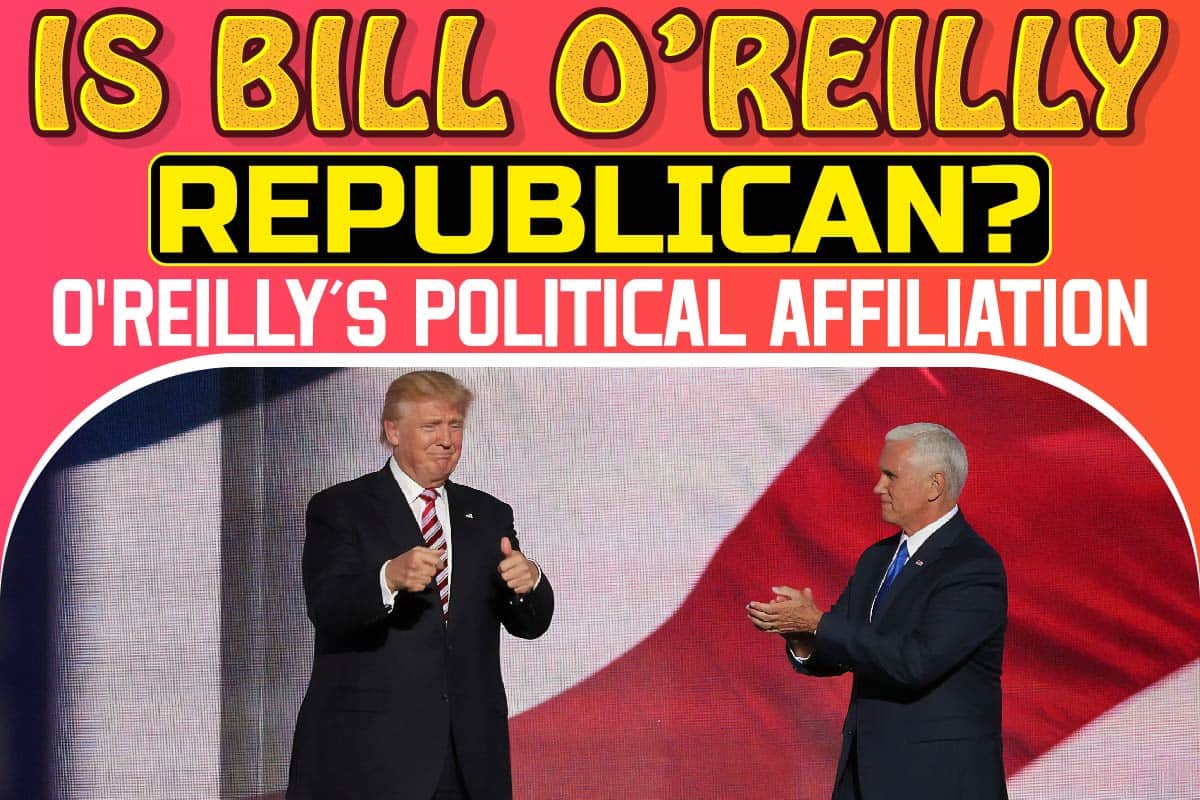 Former host of the popular cable news program ‘The O’Reilly Factor’ catches the attention of many. He isn’t just a TV and radio host but also an author, journalist, and political commentator. He has been known to use his platforms to air his views about many issues publicly.

The answer is no. William James O’Reilly Jr is not a republican. Since 1994, O’Reilly had been registered as a Republican in Nassau County, NY. He later on went and re-registered as an independent.

But why was this? O’Reilly changed his stand after The Daily News of New York City brought his previous registration to light. This was in the wake of O’Reilly’s claim of not identifying with any political doctrine.

What Is O’Reilly’s Political Affiliation?

According to his book, the O’Reilly factor, this commentator says he doesn’t identify with any political group. He doesn’t need a label because he intends to speak the truth, fight corruption and exploitation wherever it is.

But O’Reilly has also been accused of misleading the public by giving falsified information. One instance that hit the headlines is when he called out the United Way and the Red Cross for missing to deliver full funds for the 9/11 victims.

During an interview, O’Reilly asserted that he had no idea about being registered as a republican.

He went on to state that there was no alternative to enlist as an independent. But it’s known that he did not want to be enrolled in any political party.

The journalist concentrated on news associated with moral and social issues, culture, and politics.

And his opinions have driven many people to see him as a conservative American. These same opinions have landed him in trouble several times during his career.

But on The O’Reilly Factor, the conservative wasn’t much of a conservative. O’Reilly was a centrist, talking about what the public wanted to hear and being in the population’s political center. Conservatives often condemned him, and the host fought back.

Aired between October 7, 1996, and April 21, 2017on Fox News Channel and was initially known as the O’Reilly Report. The O’Reilly Factor was a cable TV news and talk show. This was where he held discussions about content political affairs, current events and hosted guests.

The show had notable guests such as Hillary Clinton and Barack Obama.

The two guests were the front runners for the 2008 presidential election. And this increased the already growing show’s media awareness.

With 21 episodes and the top news show for 106 succeeding weeks, The Factor was the best-rated show. Some segments of the show included:

The centrist approach of O’Reilly, the show’s independent host, was also why Americans loved the show. Some memorable political interviews comprise:

How Bill O’Reilly Got Fired

It was a shock to all Americans when the famed Bill O’Reilly, a Fox News presenter, got fired. This was because of the growing allegation that he had sexually assaulted female workers. This was not the first scandal or sexual harassment scandal linked to O’Reilly.

But this time, it felt different, and it was clear that he wouldn’t make it out like before. On April 1st, 2017, the New York Times published that several women had been paid settlements in the millions after accusing Mr. O’Reilly of sexual harassment.

Despite him denying this, the article shed some light on a possible pattern from Mr. O’Reilly.

This also shows how much things have changed within Fox news and in the US. People used to think that Bill O’Reilly was untouchable; he was not.

Back in 2004, O’Reilly was the biggest name in cable news, but in the same year, a producer filed a Sexual harassment lawsuit against him. According to the victim, Andrea Mackris, O’Reilly called her in the middle of the night and said sexual and offensive things.

The reaction by Fox News and Bill was to scare the victim and her attorney since the story was big at the time. Eventually, the two settled, and Mackris was paid millions, but she was fired as part of the agreement.

The O’Reilly factor would stay on air even after this until April 2017, when Fox dropped him. The most significant difference in Fox news was the resignation of Roger Ailes, who was the former Fox news chairman.

He also resigned due to a sexual harassment lawsuit against him. It could be that his presence allowed Mr. O’Reilly to get away because he launched counter-offensives against those that sued him.

To understand why O’Reilly got fired, we need to look at how sexual harassment has changed. Activists have more power to fight such people, and women are taken more seriously by society.

One of the biggest things that contributed to O’Reilly’s removal was the advertisement boycott. Big advertisers started to drop adverts on the factor, and this cost Fox a lot of money. This is because the sexual harassment scandals were terrible for their image.

This made it too hard for Fox News to keep him on-air, so Billy O’Reilly got fired. In a previous error, Billy might have survived, but these days, not even the most powerful men can avoid being made accountable.

What Is Billy Next For Bill O’Reilly?

Fox firing Bill came at a time when he was at the top of his popularity. He had millions of fans, and he was also an author of over a dozen books. The cancellation of his show had little or no effect on his popularity.

With such a big following, he has many options on how he could build his career and make even more money. One way to proceed would be to write more books since his previous works worked out very well.

Even if he doesn’t appear on a screen again, his books will still make him millions. He writes in different genres, so he has a wide range of readers. He connects with the younger generations in his writing, and this only makes him a bigger hit.

We know for sure that he is not going to get a job on another major news outlet. Despite his popularity and the competition between these companies, his reputation makes him a no-go for all other major networks.

A prominent and sensible choice was for him to create his own media platform. He had a large and ever-growing fan base because of the O’Reilly show, so it makes sense to take advantage of this and start his project. This is precisely what O’Reilly did.

Former Fox News guru is not hiding in shame. O’Reilly didn’t wait on anyone to pick him up but instead went ahead and started an online news show. The show can only be accessed by paying members.

This has been an excellent way for him to make money since most of his Fox News viewers are still willing to pay to watch him. His content streams on several platforms, including YouTube and Pluto TV.

Other than that, he is a radio presenter at a station owned by one of Trump’s allies. There has always been a close relationship between O’Reilly and Trump, with some people claiming O’Reilly made Trump into the politician we know today.

He has a show on 77 WABC, and it airs on weekdays from 10-11 pm. The show Common Sense with O’Reilly is his attempt at a comeback after his scandalous dismissal from Fox news.

Bill still denies all accusations against him as he tries to make it in this new field.

Everything seems to be working out for him, and he has had some big names on his shows, including Donald Trump. One of the ladies who sued him works with him at WABC, a co-host in a different show.

Despite his termination from Fox News, this 71-year-old still fights him. He continues to debate political issues, and he has retained most of his fans from Fox News.

Bill O’Reilly is many things, but he’s not a republican. And although it’s said that actions speak louder than words, we’ll have to take his word on this. Bill O’Reilly is an independent.

The journalist’s fruitful career took a nosedive, leaving many people loathing him but not his loyal supporters. The sexual harassment claims and the multiple settlements he made dragged his name in the mud. This cost the TV host his job at Fox News.

O’Reilly isn’t shunning the cameras but rather ensuring that Americans will not forget his name. He launched his online news show and also expanded his writing career by writing about Donald Trump. You haven’t seen the end of O’Reilly.